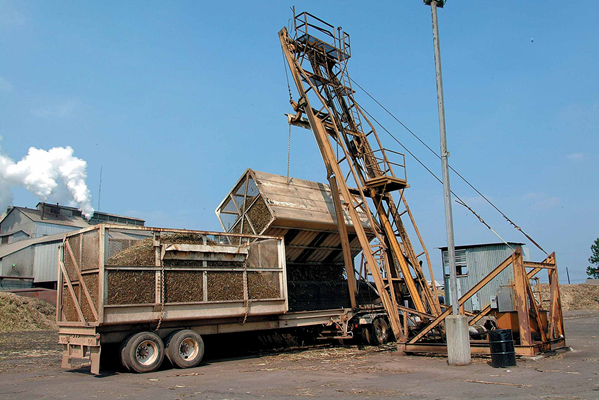 The harvested cane is loaded into trailers and taken to mills, such as this one in St. James. There are 17 mills in Louisiana. (Photo by John Wozniak) 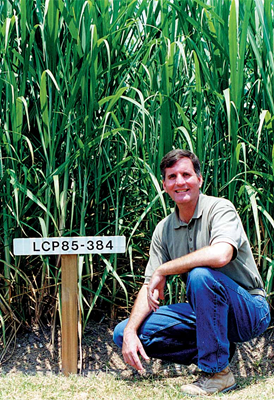 No one variety has had such an impact on the Louisiana sugar industry as LCP 85-384. Behind Kenneth Gravois is the variety. (Photo by Mark Claesgens)

Sugarcane has been an integral part of the south Louisiana economy and culture for more than 200 years. When the Jesuit priests first brought sugarcane to Louisiana in 1751, little did they know that they were laying the foundation for an industry that now contributes $2 billion to the Louisiana economy. In the last century, research advances in both production and processing have kept Louisiana’s sugar industry competitive. In these recent times of stagnant and decreasing sugar prices, increased production efficiencies and new processing technologies have helped the Louisiana sugar industry remain profitable. The focus of LSU AgCenter sugarcane research is to help maintain a competitive and viable sugar industry in Louisiana.

Sugarcane is a tropical crop trying to survive in Louisiana’s temperate climate. The ability to grow sugarcane in Louisiana and increase sugar yields to levels attained in the tropics has largely been the result of sugarcane breeding efforts. These efforts began in Louisiana in the early 1920s. The LSU AgCenter’s most recent variety release, LCP 85-384 in 1993, was a cooperative effort involving the U.S. Department of Agriculture’s Agricultural Research Service in Houma, La., and the American Sugar Cane League. LCP 85-384 has revolutionized Louisiana’s sugar industry not only with yields up to 25 percent higher than other varieties but also with the ability to provide additional annual cuttings of stalks, termed stubble crops (because the new crop of stalks develops from the stubble remaining after harvest). The typical rotation for Louisiana sugarcane has been to harvest a plantcane crop and two stubble crops from a single planting of sugarcane. With LCP 85-384, farmers can obtain three to four stubble crops with a single planting. Because of the heavy tonnage, the new variety has a tendency to fall down or lodge. Because of this, a new combine harvesting system was introduced in Louisiana in the mid 1990s. Combine harvesting systems are better suited to varieties such as LCP 85-384 and have improved harvest efficiency in Louisiana.

Sugarcane diseases have long plagued the sugar industry in Louisiana and nearly caused its demise in the 1920s. Jeffrey W. Hoy, LSU AgCenter sugarcane pathologist, has worked to keep new sugarcane diseases at bay. Since the late 1970s, four sugarcane diseases have moved into South Louisiana. First was rust. Its control has been mainly through disease-resistant varieties. Then sugarcane smut was introduced in the early 1980s, and one of Louisiana’s most promising varieties of the time, CP 73-351, had to be removed from cultivation. In the early 1990s, leaf scald disease was detected, and more recently, yellow leaf syndrome was found in sugarcane fields in Louisiana. Varietal resistance has been the primary means of sugarcane disease control, and the sugarcane pathology program works closely with the breeding program to minimize the disease impact.

Ratoon stunting disease (RSD), however, cannot be controlled through resistant varieties. To help control this disease, Hoy established the Sugarcane Disease Detection Laboratory in 1997. Because of this lab, farmers can rely on obtaining healthy seedcane, which is the primary means of RSD control. As indicated in this issue of Louisiana Agriculture, the AgCenter, along with Certis USA, provider of Kleentek seedcane, and the Louisiana Department of Agriculture and Forestry, has helped turn the tide against a disease that has caused significant losses in sugarcane for many years.

Because successive crops of sugarcane are grown from a single planting, weed control is a major concern. Until recently, the introduction of new herbicides for sugarcane was rare. James L. Griffin leads the LSU AgCenter’s efforts in evaluating new herbicides and control measures for weeds encountered by Louisiana’s sugarcane producers. Several new herbicides are being evaluated to give farmers more weed control options. Griffin’s work also includes getting the most out of currently labeled herbicides, such as fine-tuning conditions for johnsongrass control with asulam. In addition to this work, sugarcane varieties are tested for tolerance to all herbicides so that yield potential is not decreased at the expense of weed control. To realize the maximum potential of sugarcane, careful weed control is a must.

Other LSU AgCenter sugarcane production research includes soil fertility, rotational crops, cold tolerance, engineering and economic studies. With fertilizer prices increasing because of rising natural gas prices, efficient use of fertilizers is of utmost importance. William B. Hallmark and Charles W. Kennedy address research issues to make the most out of fertilizer inputs and other soil amendments. Both Howard “Sonny” Viator and Griffin have looked at some of the positive aspects of growing soybeans in the fallow year of the sugarcane crop cycle. Opportunities for increased weed control and supplementary income fit in well with sugarcane farming practices. Benjamin L. Legendre, extension sugarcane specialist, conducts cold tolerance studies. Sugarcane harvest in Louisiana can often occur after a killing freeze. Legendre’s work provides information regarding how well differ ent sugarcane varieties can withstand freezing temperatures. Michael P. Mailander is partnering with Cameco Industries, Inc., to develop a yield monitor for sugarcane combine harvesters. The ability to map sugarcane yields will help farmers accurately determine field yields and identify low yield production areas within a field. Michael Salassi leads the AgCenter’s efforts on the economics of sugarcane production. Economic analyses, such as optimizing crop cycle length, the feasibility of precision land leveling and annual sugarcane budgets, are just a few of his projects. With falling sugar prices, careful attention to production costs is a must if sugar producers and processors are to survive.

Producing sugarcane with minimal adverse environmental effects is receiving increased research attention within the LSU AgCenter. Magdi Selim and Richard Bengtson have conducted studies on the fate of pesticides and sediment in runoff water during sugarcane cultivation. Their efforts now include studies to determine the water quality effects of maintaining the trash residue after combine harvesting with and without burning. These studies are important in developing Best Management Practices (BMPs) for Louisiana’s sugarcane farmers. BMPs are voluntary practices farmers use to improve water quality in the surrounding environment. An AgCenter survey showed that many of Louisiana’s sugarcane farmers are using BMPs in their operations. The AgCenter has also helped sugarcane farmers learn to burn cane to minimize environmental problems. Most of the sugarcane farmers in the state have attended training workshops conducted by the AgCenter on controlled agricultural burning.

The Audubon Sugar Institute conducts sugar processing research with the mission “to foster a center of excellence for applied and original sugar research, which exceeds the expectations of our stakeholders in Louisiana and the international sugar industry, through innovative research, technology transfer and education.” Peter Rein leads the research effort at the institute. Research goals include milling efficiency and a more diversified sugar processing industry.

Sugarcane production and processing are complicated businesses. The LSU AgCenter is committed to conducting research to meet the needs of this vital South Louisiana industry.

(This article appeared in the fall 2001 issue of Louisiana Agriculture.)