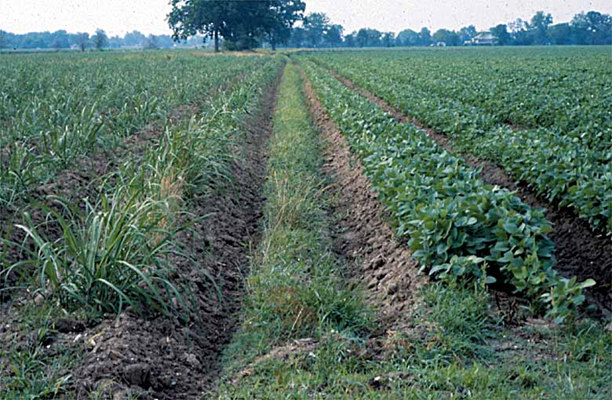 The fallow field at right was planted in soybeans. (Photo by James L. Griffin) 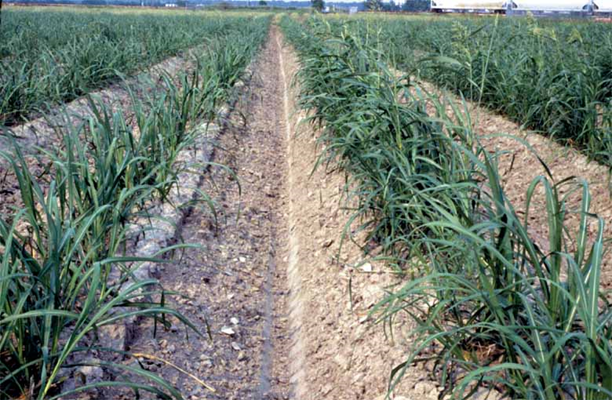 The sugarcane at right, which is thicker and greener, was planted following Roundup Ready soybeans. Research, however, shows no long-term residual nitrogen value. (Photo by James L. Griffin) 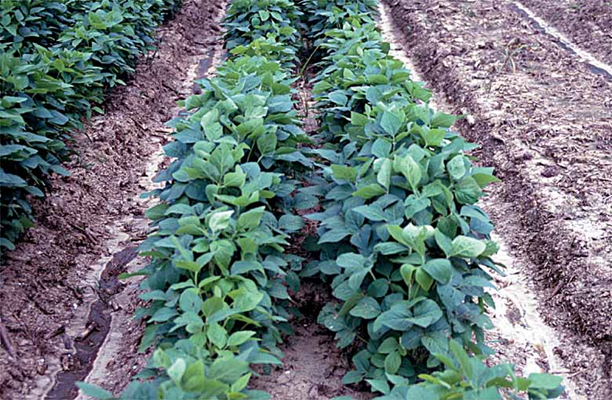 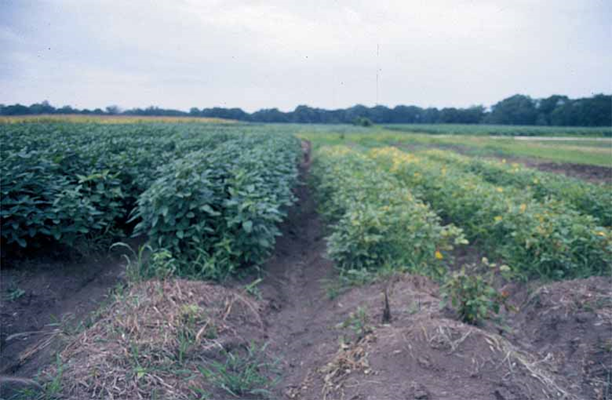 Growers may choose varieties of differing maturity for timely sugarcane planting. The field on the right is early maturing and will be harvested sooner. (Photo by Howard P. “Sonny” Viator)

Only a small percentage of the more than 75,000 acres of sugarcane fallow land in Louisiana is planted annually to rotational crops. Most sugarcane growers traditionally have used the fallow period for three purposes: to control troublesome weeds like johnsongrass, itchgrass and bermudagrass; to reform the land to facilitate drainage; and to rejuvenate the soil. Grower interest in rotational crops, however, has surfaced with the availability of glyphosate-resistant (Roundup Ready), early-maturing Group IV soybean varieties that can be grown on fallow land either as a cover crop or a cash crop.

Studies conducted at the LSU AgCenter’s St. Gabriel Research Station indicate that johnsongrass control in fallowed sugarcane fields planted to glyphosate-resistant soybeans grown as a cash crop compared favorably with that of a non-crop, conventional tillage herbicide program. Subsequent yields of sugarcane for the fallow-period management treatments were equivalent. Preliminary results on the evaluation of itchgrass and bermudagrass control in glyphosate-resistant soybeans look promising.

Researchers at the LSU AgCenter’s Iberia Research Station conducted a series of experiments designed to estimate the nitrogen fertilizer value of green manure soybeans (cover crop) for exploitation by succeeding sugarcane crops. They found that little fertilizer credit could be assigned to the green manure. It is postulated that the excessive length of time between soybean plow-down in late summer or early fall and the resumption of sugarcane growth the following spring diminishes the availability of organic nitrogen from soybean residue.

Researchers found no difference in sugar yield between the conventional fallow and soybean green manure treatments. The absence of fertilizer value for green manure soybeans should not condemn the practice of planting soybeans during the fallow period. The current focus on the protection of soil and water resources provides an additional incentive for the use of a cover or cash soybean crop as a Best Management Practice (BMP) for erosion control. Additional benefits include maintenance of soil organic matter and opportunity for cash flow from harvested soybeans. Also, economic analyses indicate the costs associated with producing a soybean crop could be substituted for standard fallow activity and seedbed preparation costs. Of course, this substitution is predicated on the ability of growers to control weeds and adequately prepare a seedbed for late summer sugarcane planting.

Growers must be aware of problems that may be encountered with soybeans grown in rotation with sugarcane. Most often, poor sugarcane stands following green manure soybeans are attributable to obvious causes like stalk rot, cut worms, persistent weeds and possibly nematodes. Weak stands also may result from planting sugarcane too quickly after incorporating green manure. Another significant concern is delayed maturity of soybeans grown as a cash crop. Physiologically distressed soybean plants, which remain green beyond normal maturity date, delay timely harvesting and subsequent planting of sugarcane.

Recently confronted with sugar prices at or below the cost of production, sugarcane growers need to consider diversification as a means of increasing the cost effectiveness of their farming operations. The production of soybeans in the fallow period offers an economically sound option for conserving topsoil, controlling weeds and generating income.

This article appeared in the fall 2001 issue of Louisiana Agriculture.