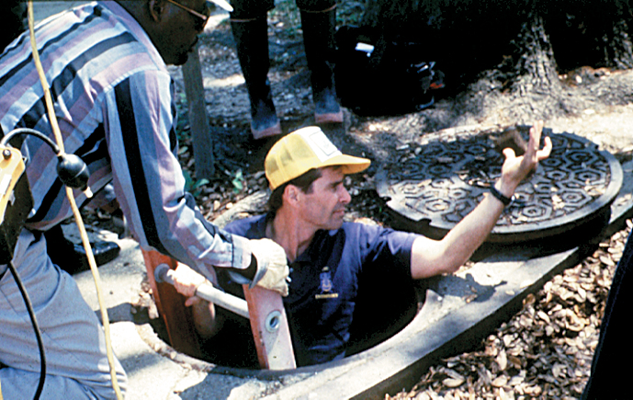 Gregg Henderson going down into a manhole in the French Quarter to place termite baits. (Photo by Jon Felix)

Some of the underground damage done by the Formosan termites. (Photo by John Holt) 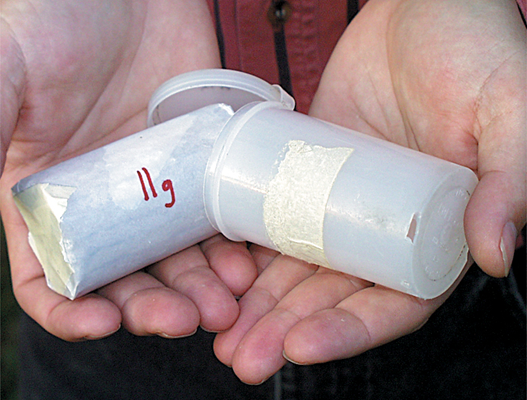 This is the bait that is placed underground to keep the termites from eating the cables.

The Formosan subterranean termite is a formidable adversary. Foraging aggressively and quickly reducing wooden structures to paper-thin sheaths, this species of termite has been a particular menace in the New Orleans area for more than 30 years. There seems to be no end to the list of materials the Formosan termite will eat in its pursuit of cellulose, the major constituent in wood. Evidence of this was the discovery that Formosan termites were damaging buried telephone communications equipment by eating through the polyvinyl chloride (PVC) casing. Although the termites cannot directly harm the copper wire, by breaking the watertight seal, they allow in moisture. This can cause corrosion or short circuits, possibly leading to loss of service. BellSouth has estimated that the cost required for repair caused by the Formosan termite in New Orleans had reached $400,000 in 1993.

Similarly, power outages have occurred in underground electrical lines owned and operated by the local electric company. For example, a major power outage in 1993 affected several hospitals and, in 1998, shut down the French Quarter. Formosan termites were thought to be the probable culprit.

The LSU Agricultural Center has been involved with a cooperative study funded by BellSouth Telecommunications and FMC Corp. for the past five years. The goal of the study has been to develop an effective control system for the telecommunications environment. Liquid termiticides are ineffective for this purpose and could potentially endanger BellSouth employees and contaminate local bayous and lakes. Regular tracking powders (toxicants in a dust formulation) would quickly become wet and wash away. A bait system that contains a slow-acting toxicant in a child-resistant container would be ideal for the cable system. Baits can affect a larger population of the targeted pest than only those feeding directly, since food is transferred back to nest mates. In addition, when the need arises, the baits can simply be removed from the site, thus drastically reducing any potential off-target contamination.

Starting in 1993, tubular baits about 3 inches long and 1.5 inches in diameter and containing up to 100 parts per million of sulfluramid on a cardboard matrix were placed in manholes having Formosan termites. These baits include a slow-acting stomach poison developed by the U.S. Department of Agriculture in the late 1980s in a bait formulation for use against fire ants. Baits were placed close to termite activity to increase the likelihood of the termites finding and feeding on them. Between 1993 and 1995, 14 manholes were baited, and all but one site showed complete cessation or reduced termite activity.

Although the treated cardboard was effective against the termites, it quickly degraded in the wet conditions of the junction chambers. Furthermore, the raw bait material used in the early studies did not meet federal registration requirements for minimal human contact. After trying several techniques, it was determined that a wax coating could be applied to the baits, making them watertight without inhibiting termite acceptance.

The coated waterproof baits were then placed in plastic containers with small holes in the sides. The containers provided protection from other pests, inhibited unintentional human contact with the bait and could be installed in a variety of ways according to the situation.

In 1996, the new bait systems were tested at 15 sites. Observations made through February 1998 revealed that eight of the sites were termite-free. At the other sites, numbers of foraging termites were reduced. In some cases, the numbers dropped from several hundred to fewer than 20.

The manholes are an ideal place for the termite baits since food choices are limited around the underground cables. The baits also help reduce the number of termites that could pose a danger to wood in the general vicinity of where baits are placed.

(This article was published in the winter 1999 issue of Louisiana Agriculture.)