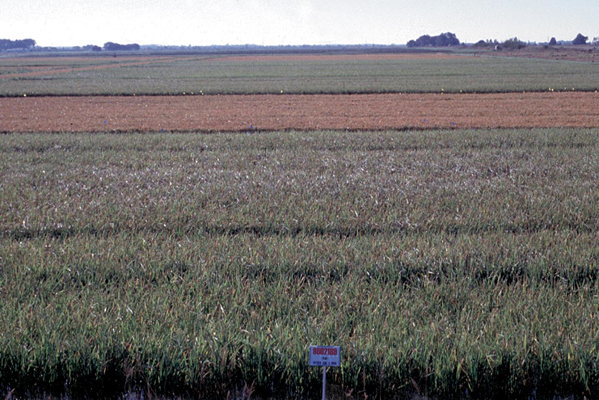 Figure2. When planted in early August, the domestic rice variety Cypress (far center)reached maturity in November and began its decline much sooner than the experimental genotypes (foreground and background) that did not reach maturity.(Photo by W. Ray McClain) 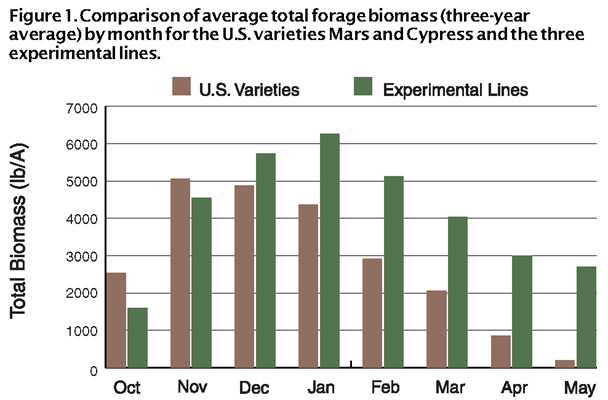 Crawfish aquaculture in Louisiana depends solely on a forage based food system for supplying nutrients to growing animals. Because of available plant residue following grain harvests and because rice exhibits good regrowth characteristics, crawfish production often follows the rice harvest as a common crop rotation practice. Not all use of rice forage in crawfish production occurs as a result of rice-crawfish multi-cropping practices, however. A substantial portion of the crawfish production occurs in mono-cropping systems, where crawfish is the only crop harvested. Rice is often the preferred forage crop in those systems and is planted strictly for its desirable forage characteristics and not grain production. Although rice has proved to be, on average, the best forage resource, it is often depleted prematurely in ponds with large numbers of crawfish. This causes food shortages for the remainder of the production season, resulting in stunted crawfish. Since crawfish are valued according to harvest size, this causes an economic disadvantage.

Currently, only common domestic rice varieties, bred for grain production, are available for mono-cropping systems. The forage characteristics of today’s domestic rice varieties, however, are less desirable under flooded crawfish culture conditions than those of the past. Rice breeders have developed varieties for grain production that have higher grain-to-forage ratios, are shorter in plant height and mature earlier. These characteristics render them less desirable as crawfish forage sources. As the gap widens between the desirable traits of the older varieties and the newer grainproducing varieties, the need has grown for a crawfish-specific rice variety with more desirable forage traits.

Research has been under way at the Rice Research Station since 1991 to evaluate rice genotypes for characteristics desirable in crawfish culture. More than 16,000 genetic lines from the U.S. Department of Agriculture Rice World Collection, as well as current and older domestic varieties, have been screened. Desirable traits, such as extensive forage production, cold tolerance, long maturity cycle, high resistance to lodging, slow depletion rates, disease resistance and propensity for forage regrowth in early spring, were some of the criteria for selection. Large differences in forage attributes were observed, and three outstanding candidates–short grain types originating in Taiwan, Fiji and China– were selected for further trials.

In preliminary field trials conducted over three years in small, experimental crawfish ponds, the improved exotic lines consistently outperformed the varieties Mars, an industry standard for years, and Cypress, the most currently used variety. There were few differences among the experimental lines, but those genotypes produced greater amounts of forage than did the domestic varieties, and the forage availability during the later months of the crawfish production season was much greater (Figure 1).

Moreover, in preliminary yield tests conducted under typical rice-growing conditions, all three experimental lines averaged grain yields comparable to current domestic varieties. Milling yields of two of the lines were satisfactory, too. Acceptable grain yields would be essential to seed growers for the economic propagation of seed. Good milling yields might encourage production of rice for niche grain markets, providing greater incentives and markets for the seed producers.

Further evaluations of the experimental lines and crawfish production will be conducted, and improvements will be sought through additional purification during seed increases. Pending acceptable results of those tests, one or more of the experimental lines will be evaluated for immediate release as the first crawfish-specific rice variety or incorporated into the Rice Station’s rice breeding program for further development.

(This article was published in the fall 1999 issue of Louisiana Agriculture.)