Potential for the Partitioned Aquaculture System in Louisiana 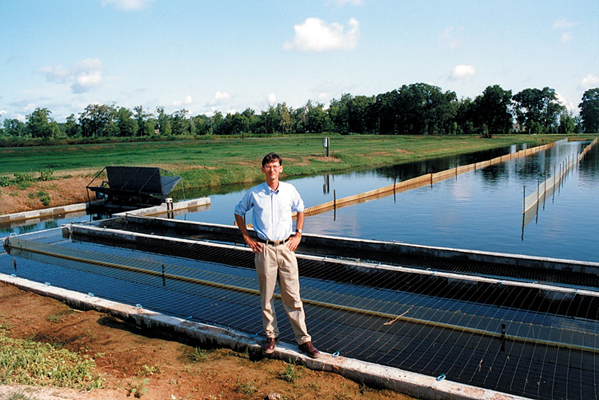 A 3/4- acre Partitioned Aquaculture System was built at the Aquaculture Research Station in 1999.Robert Romaire is in charge of research on the use of this technology.( Photo by John Wozniak) 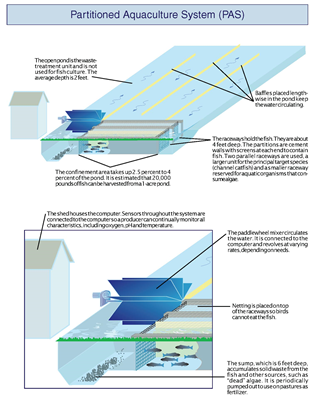 The most serious problems that face catfish farmers include losses from birds and diseases, off-flavor and the shortage of labor to harvest fish. These problems have been magnified in recent years as fish farmers have increased stocking and feeding rates to keep ahead of increasing expenses and competition.

Control options for bird predators are limited, especially for federally protected migratory waterfowl, such as the double-crested cormorant, herons and egrets. Diseases such as enteric septicemia catfish (ESC) and columnaris not only can devastate profits but create the need for additional costs in control and prevention. Blue-green algae thattemporarily impart a musty, unacceptable flavor in fish flesh limit sales and hinder cash flow. They cause the additional cost of having to feed the fish while holding them until off-flavor problems subside.

A decade ago, aquacultural researchers David Brune, John Collier and Tom Schwedler at Clemson University in South Carolina developed a new concept to minimize problems with birds, water quality and off-flavor, disease and harvest. The unit was called a Partitioned Aquaculture System (PAS). The PAS integrated intensive culture of fish in rectangular units, or raceways, commonly used in mountain states to grow cold-water fishes such as rainbow trout. The system incorporated sanitary engineering principles using a pond or lagoon to reduce solids and soluble wastes.

With financial support from the Louisiana Catfish Promotion and Research Board, Louisiana Agricultural Experiment Station (LAES) scientists constructed a 0.75-acre experimental demonstration PAS unit at the Aquaculture Research Station to investigate the economic feasibility of using PAS technology in Louisiana.

The system capacity of conventional open catfish ponds is about 5,000 pounds per acre, requiring about 2 horsepower per acre of mechanical aeration to support the 100 pounds or more per acre of feed supplied to the pond daily. Yields of catfish from open ponds that exceed 5,000 pounds result from multiple cropping and re-stocking programs during the production season. In contrast, PAS technology allows production capacity to approach 20,000 pounds of per acre per year with feed conversion ratios (weight of feed:weight of fish produced) near 1.5:1 through algal management and waste removal.

The PAS has four basic components: the fish culture unit (raceway), the settling sump, the paddlewheel mixer and the open pond (Figure 1). The raceway is separated from the open pond to facilitate better management of fish production and removal of solid and soluble waste produced by the fish. Water flow through the raceway and open pond is maintained with a low head paddlewheel mixer. A settling basin (sump), located at the outlet of the raceway(s), captures and concentrates fish waste for removal from the system. The water leaving the raceway and sump flows through the open pond, which serves as a waste treatment unit to remove soluble metabolic waste. The recirculating PAS does not require amounts of makeup water beyond the normal volumes needed to meet evaporation and seepage losses in conventional ponds.

Fish Confinement System (Raceway). The raceways are gated, rectangular troughs, 4 feet deep, that can be constructed from concrete, lumber and fabric, or other materials, and the square footage generally ranges from 2.5 percent to 4 percent of the open pond area. Two parallel raceways are used, a larger unit for the principal target species (channel catfish) and a smaller raceway reserved for aquatic organisms that consume algae. Water quality entering and leaving the raceway is monitored continuously by oxygen, temperature and pH sensors connected to a computer that can control the rotational speed of the paddlewheel mixer and operate supplemental aerators.

Settling Sump. The sump, which is 6 feet deep, accumulates solid waste from the fish and other sources, such as “dead” algae. The solids are removed periodically by automatic or manual vacuum to reduce oxygen demand, thereby increasing fish carrying capacity. Nitrogen and phosphorus recovered from the waste are applied to pastures.

Paddlewheel Mixer. The paddlewheel mixer is the primary control device. Designed to rotate at 1.5 revolutions per minute (rpm) to 3 rpm, it produces a water flow of 0.15 feet to 0.3 feet per second (fps) in the open pond. A computer control system regulates water velocity and reduces oxygen loss from super-saturated levels by varying the rotational speed of the mixer from information provided by the oxygen sensors in the raceways.

Open Pond. The open pond is the waste-treatment unit and is not used for fish culture. The shallow (1.5 feet to 2.5 feet) pond is subdivided into channels by internal baffles. This allows for uniform mixing of the water, optimum penetration of sunlight and maximal algal growth. Algae in the open pond removes toxic ammonia from the water and optimizes dissolved oxygen production. Algal blooms followed by algal die-offs are minimized, thus stabilizing system water quality.

Filter-Feeding Fishes. At fish production levels exceeding 9,000 pounds per acre, filter-feeding fish, such as tilapia, shad or silver carp, and freshwater mussels, must be included in the PAS to consume microscopic algae. Algal consumption by a filter-feeding fish reduces algal biomass and maintains high rates of algal growth, thus improving water quality (oxygenation and ammonia reduction), reducing potential for off-flavor and recapturing some of the nitrogen and phosphorus excreted by the catfish into the flesh of the filterfeeding species. To optimize harvest of algae, filter-feeding fish are contained in the smaller parallel raceway. Biomass of the filter-feeding fish is maintained at 20 percent to 25 percent of the target species biomass, at season’s end, to achieve effective algal control. A 300 percent to 600 percent increase in water treatment capacity over conventional methods can be achieved as a result of increased algal growth combined with algal harvest by filter-feeders and water mixing, thus increasing fish production capacity over that of conventional ponds.

PAS technology incorporates the best features of earthen ponds, the least expensive form of aquaculture production technology, while simultaneously reducing many of the problems of typical pond systems. Because the fish are intensively cultured in a raceway of small area (normally 4.5 percent or less of the total pond system area), the raceway can be covered cost-effectively to protect the fish from bird predation. In addition, therapeutic drugs and chemicals for disease treatment can be administered at reduced cost because of less water volume to treat. The inclusion of a filter-feeding fish or other aquatic organism reduces the potential for offflavor by removal of odorous species of blue-green algae. Fish size can be managed by grading, and less labor is needed for harvesting fish than is required for conventional ponds. The system also results in lower costs for utilities and chemical use. Pond water is continuously re-used and purified, thereby conserving water resources and reducing the effects of water discharge on receiving waterways. Additionally, the PAS can be used to cultivate any aquatic species amenable to high density culture in a confined raceway, such as channel catfish, blue catfish, blue catfish and channel catfish hybrids, hybrid striped bass, ornamental carp, red drum, hybrid bluegill and marine shrimp. Because highly intensive fish culture systems such as the PAS tend to push environmental production capacity, the danger of catastrophic failure exists. Disadvantages include the potential for greater incidence for disease because of fish density. Mechanical failure of the paddlewheel mixer or failure of supplemental aerators to activate during critical periods, such as power outages, could cause massive fish loss from oxygen depletion. One of the best filter-feeding fishes now available for algal control, Tilapia nilotica, is not permitted for outdoor culture in Louisiana. In addition, detailed economic data on capital construction costs and cost and returns are not known.

Scientists at the Aquaculture Research Station are working cooperatively with a commercial catfish producer in north Louisiana to evaluate the biological and economic feasibility of a 2-acre PAS built for evaluation of catfish fingerling production. The computer-assisted water quality monitoring and control system was developed and installed by Aquaculture Research Station researchers in cooperation with Kiel University, Germany.

Time will tell if the PAS will revolutionize the way channel catfish or other commercially important species are cultivated. But aquaculture researchers in the LAES will work closely with Louisiana’s aquaculture producers to make the PAS a commercially viable option to consider for future economic development.

(This article was published in the fall 1999 issue of Louisiana Agriculture.)