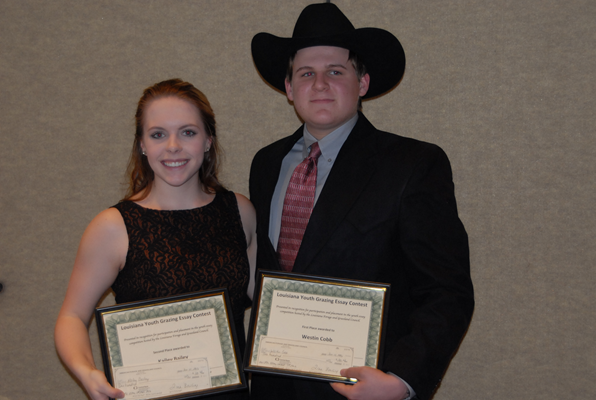 Westin Cobb, right, of Livingston Parish, was named first-place winner, and Kailey Bailey, of Beauregard Parish, placed second in a grazing management essay contest sponsored by the Louisiana Forage and Grassland Council. The awards were presented during a luncheon on Jan. 11 at the American Forage and GrasslandsCouncil annual conference. (Photo by Rick Bogren, LSU AgCenter) 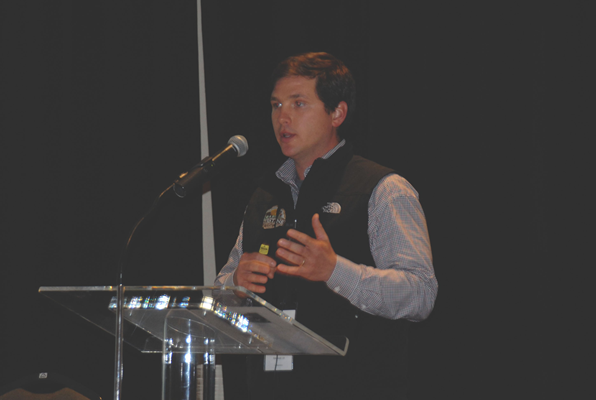 The funds for the award came from Teddy Gentry, a member of the country band Alabama. Gentry owns Bent Tree Farm near Fort Payne, Alabama, that focuses on raising grass-fed beef and where he developed the South Poll breed of cattle.

Gentry, who participated in 4-H and FFA in his youth, gave his $1,000 speaker fee to fund the special contest.

The annual conference usually is held farther north in such locations as Louisville and Cincinnati, said Gary Wilson, of Findlay, Ohio, current president of AFCG. Next year, the event will be in Virginia.

“We select our sites through bids, and Baton Rouge was this year’s selection,” Wilson said. “It’s been a long time since we’ve been in the South.”

The opening speaker at the conference, Gentry talked about reproduction, fertility and longevity in cow herds and about how he and a partner developed the South Poll breed of cattle. The breed is a cross of Hereford, Red Angus, Senepol and Barzona breeds.

“I have a passion for the small farm; the family farm,” Gentry said. “You can’t make progress by chasing extremes.”

Gentry said he developed the South Poll breed to have a type of cattle that would thrive in the heat and humidity of the South and still produce tender grass-fed beef.

A cow eats her weight every 30 days, Gentry said. “A 1,000-pound is more efficient,” he said. “And efficiency goes down as weight goes up.”

Gentry’s presentation kicked off the two-day meeting of more than 35 workshops and 36 poster presentations.

Attendees also had an opportunity to participate in a pre-meeting farm tour in East Feliciana Parish led by Ed Twidwell, LSU AgCenter forage specialist and Louisiana contact for the national organization.

In one workshop, LSU AgCenter beef researcher Guillermo Scaglia presented results of his research on beef production on different Bermuda grass hybrids. He measured how much weight an animal gained compared with the amount of forage it consumed.

“The better the forage, the less herbage mass you need for the same gain,” Scaglia said.

Increased microbial biomass in the soil leads to increased activity and nutrient availability to plants, she said.

Iverstine told about his operation that includes pasture-based beef, chicken and turkey production and wood lot hog production. His 130-acre operation produces 10,000 broilers, 500 turkeys, 80 head of cattle and 200 hogs that he markets through the Red Stick Farmers Market in Baton Rouge as well as to eight restaurants and other consumers.