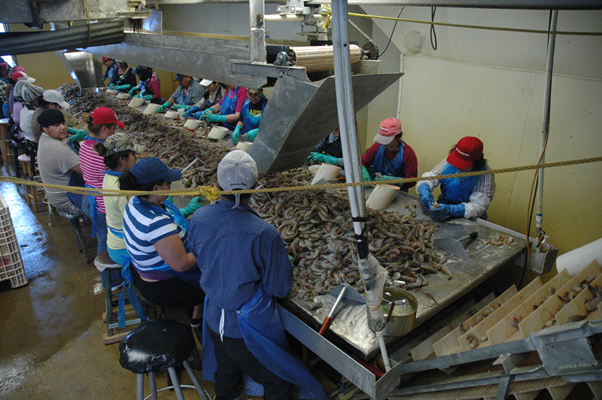 BATON ROUGE, La. – Most commercial crawfish peeling operations in Louisiana are winding down, but a labor shortage they faced this season is likely to affect other seafood processors that aren’t in full swing yet.

Demand for migrant labor has risen to the point that a federally mandated cap was reached earlier than ever this year — in January. The cap usually is not met until May or June.

“It caught seafood processors off guard,” said LSU AgCenter and Sea Grant economist Rex Caffey. “Many of them didn’t even have their requests for H-2B workers in yet.”

Louisiana seafood processing facilities annually rely on more than 2,000 workers with H-2B visas to peel crawfish and shrimp, shuck oysters and filet fish. They typically hire workers for a few months of the year, and most work 60-hour weeks.

H-2B visas allow nonimmigrants to come to the United States for seasonal work in an array of sectors, including landscaping, housekeeping and construction. The U.S. Department of Labor caps the number of H-2B workers allowed in the country per year at 66,000, with 33,000 allowed per six-month period (October-March and April-September).

While that policy has been in place for years, employers have been hitting the limit earlier and earlier, Caffey said. In the past, the Department of Labor has granted extensions on the cap, but that has not happened yet this year.

There are about 60 seafood processing facilities in Louisiana, half of which specialize in crawfish. Crawfish peeling has tapered off, but the shrimp and finfish seasons are just getting started. Oyster production is year-round but picks up in the summer.

In many cases, it is difficult for processors to find willing domestic labor, Caffey said. Without workers, seafood processing plants face the possibility of shutting down.

There is another twist. Some processors are facing higher production costs because this is the first year they’ve had to comply with the Department of Labor’s standardization of wages.

Previously, processors could conduct a private wage survey that proved they paid workers at a rate comparable to local domestic wages, Caffey said. That is no longer allowed, and they must now pay workers at a federally mandated rate. Depending on the region of the U.S., the rate falls between $10 and $14 per hour.

That means better pay for workers — more money to send back home or spend in local economies. But for businesses, paying higher wages may mean less profitability.

“There are two challenges. You have to get your labor, then you have to pay your labor,” Caffey said. “You may lose the product by not having labor and those wages that are spent here. It could have an economic impact.”

Caffey and other AgCenter economists are hoping to study this complex problem further. In addition to the labor cap and wage standardization, the overall economics of the seafood industry have changed significantly. Foreign competition has skyrocketed in recent years, Caffey said, and much of the seafood consumed in the U.S. today is from overseas.