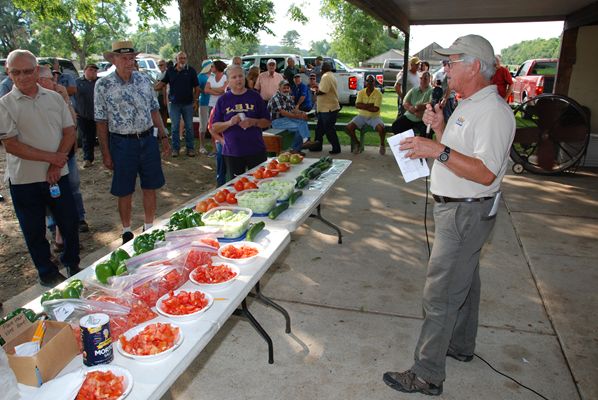 PAULINA, La. – Residents of this small community in St. James Parish are serious about their tomato production, and it shows in the support for their annual tomato field day.

When Raymond “T-Black” Millet announced he would again be hosting the St. James Parish 6th Annual Tomato Field Day, he had no doubt their community would be great supporters.

Other than last year when most of the parish was struggling with flooding, the field day draws a good crowd and has become a community event, said Craig Roussel, LSU AgCenter agent in Ascension and St. James parishes.

“We had a serious problem with flooding the day before the field day was to be held last year,” Roussel said. “We cancelled because we knew the community would be pulling together to help their neighbors out, and we didn’t want to interfere with that.”

This year the rain didn’t cancel the field day, but it did have a noticeably negative effect on the quality of this year’s crop.

During the field tour, Roussel discussed the different tomato varieties that do well in south Louisiana and showed the effect of excessive rain.

Southern wilt disease is one of the early-season problems growers will experience with tomatoes, Singh said.

“The bacteria clogs the water reservoirs in the whole plant, and the plant will begin to wilt and will not recover,” Singh said. “The best control is crop rotation because the bacteria stays in the soil from three to four years.”

The area has a lot of small growers who sell tomatoes locally to groceries stores and at roadside stands, Roussel said.

“Many of them still prefer the older varieties, so we try to show them some of the newer varieties that have better disease resistance and higher production capabilities,” he said

In past years, Millet said he has raised as many as 5,000 tomato plants, but now his age has forced him to cut back on that number.

“I worked 49 and one-half years in the gas pipeline business, and when I retired I wanted to raise a few tomatoes and make a little money,” Millet said.

He uses a special process in his tomato operation, and Roussel said it ensures that he brings in the earliest tomatoes each year.

His crop didn’t look as well as he would have liked this year because of rain, he said.

During the tour, Roussel showed the difference between the determinate and indeterminate tomato plants. Determinate varieties will only grow to a certain height, and all the fruit will ripen about the same time.

Even though tomatoes are the main attraction, for the past couple of years, some bell pepper and cucumber varieties have been added to the lineup of featured vegetables, Roussel said.

“I don’t know what it is about this area, but people are just attached to tomatoes,” he said. “If there’s one thing they want, if they don’t grow them, they are looking to buy them as early as possible in the year.

Simoneaux gave an update on some of the insects that may be causing damage in vegetable gardens.

“Some of these insects are small, such as leaf miners, and normally aren’t causing enough problems to warrant spraying,” she said.

The tomato hornworm is an insect that needs to be scouted for because if it’s not found when it’s small, it can do a lot of damage to the plants, Simoneaux said.

“Make sure to read the label on insecticide containers to insure that you are applying the appropriate chemical for the pest that you are seeing in your garden,” she said.

Orgeron explained the different types of herbicides that can be used in the garden and which plants they are effective on.

“One thing you need to be careful about is how you apply these different chemicals,” he said. “Some of these herbicides are volatile, and you have to incorporate them into the soil, as they can evaporate in 24 hours.”

The highlight of the field day was the announcement of the largest tomato winner. Roussel said he was asked if the tomato had to be pretty. He reminded those in attendance that appearance was not a requirement, it just had to be big.

This year’s winner weighed in at 19.4 ounces and the winner was grown by Millet.