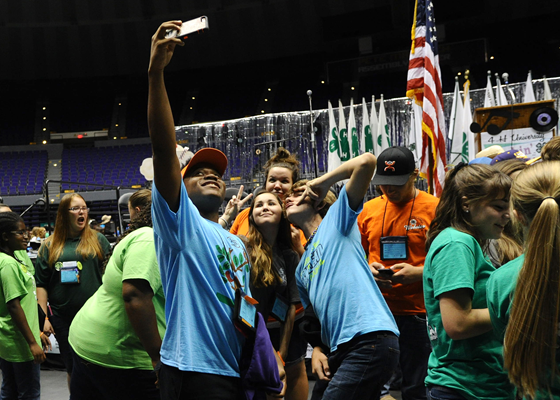 A 4-H’er poses with friends for a selfie after the opening ceremony on June 23. 4-H University brings about 1,500 4-H’ers from around Louisiana together — many who have never met before, but end up lifelong friends. Photo by Olivia McClure/LSU AgCenter 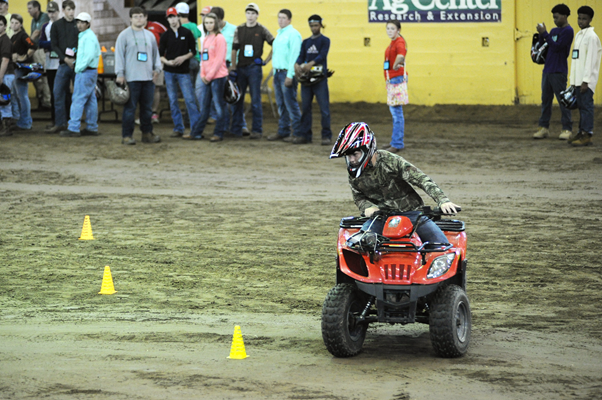 A 4-H’er negotiates a curve as other participants watch during the ATV contest on June 24 at 4-H University. Photo by Olivia McClure/LSU AgCenter 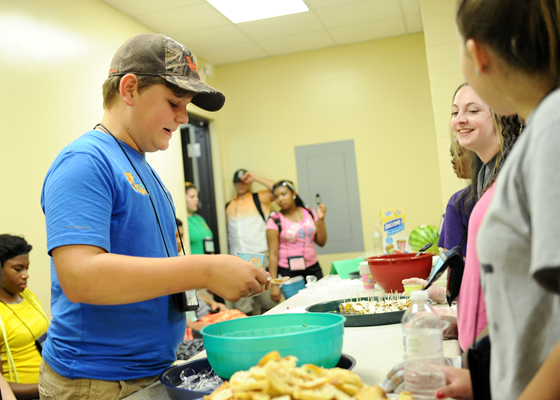 BATON ROUGE, La. – For many of the teenagers who come to 4-H University on the LSU campus every summer, it is one of the first times they are away from home and have to make their own decisions. But often, they find that a little bit of bravery and friendliness can go a long way.

The annual LSU AgCenter event, which was held June 23 to 26, features both traditional contests and Clover College educational courses on topics that range from ATV safety and plant science to fashion and cooking. 4-H U brings about 1,500 4-H’ers from around the state together.

“You meet a lot of new people from around Louisiana,” said Rachel Rachal, 16, of Natchitoches Parish. “It’s good to know people around, so if you’re in a new place, they can help you out.”

That was a lesson she and Riley Charlet, 13, of West Feliciana Parish, quickly put into practice. They got lost on campus together three times on the same day they first met.

“You gain independence, and you learn how to survive on your own, how to manage your money,” Riley said.

The girls were in the Tiger Chef Program, a Clover College course where they prepared bruschetta and served it on small pieces of toast to other 4-H’ers at a tailgate-style party focused on nutritious snacks.

This year was Rachel’s third trip to 4-H U, but Riley’s first. Neither has entered a contest before, but they are thinking about doing so next year. And they’re definitely planning to keep in touch, they said.

“4-H University is truly an exceptional experience,” Bill Richardson, LSU vice president for agriculture and dean of the College of Agriculture, told attendees of the opening ceremony on June 23. “What you get out of this week will depend a lot on how much you put into it. Make friends, meet people, experience things, view the campus, talk to people who are doing things that may be different from the world you’ve grown up in.”

Janet Fox, department head of LSU AgCenter 4-H Youth and Family Development, said 4-H U lets youth discover campus life while exposing them to ideas and activities they may not encounter at home. This is important as they make decisions about attending college or choosing a career, she said.

One of the educational programs focused on international career opportunities, such as positions at government agencies and nonprofit organizations. Visiting scholars from countries around the world also discussed their cultures and work as students at LSU.

“When you enter the workforce down the road, you’re going to be exposed to a lot of international things, even in careers that traditionally didn’t have international components,” said Susan Karimiha, AgCenter International Programs coordinator.

Students in a Clover College class on biofuels learned about the AgCenter’s pilot plant for processing energycane and got to do experiments in a lab. Jace Knott, 14, of St. Martin Parish, said he took the class to learn about different crops. Jace’s father is a farmer, and he wanted to find out more about what he does, he said.

Carter Rusk, 13, of Avoyelles Parish, said he liked learning about biofuels, but was more excited about the way he got to do it.

“You get to walk around and not have someone surrounding you the whole time,” Carter said.

Knott said that is important for people his age.

“You have to learn responsibility for the future,” he said.