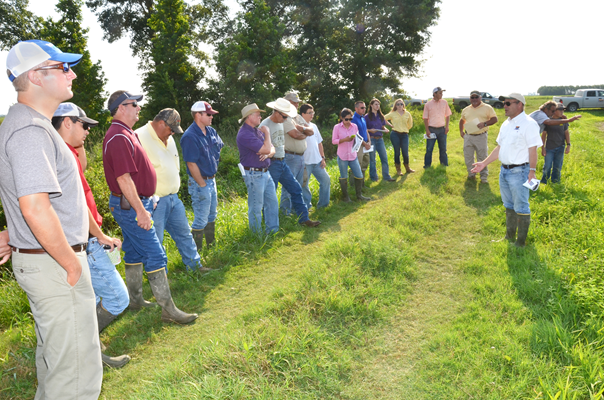 Mike Stout, LSU AgCenter entomologist, far right, talks at the Evangeline Parish Rice and Soybean Field Day on June 9 about research by graduate student Lina Bernaola on the relationship between a fungus and the rice water weevil. Photo by Bruce Schultz

MAMOU, La. – A fungus in soil has shown a surprising connection with the main insect pest of rice, the rice water weevil, according to an LSU AgCenter entomologist.

Mike Stout, speaking at the Evangeline Parish Rice and Soybean Field Day on June 9, said the fungus, called mycorrhizae, is found on plant roots and helps a rice plant with the uptake of potassium and phosphorus.

He said a doctoral student, Lina Bernaola, is conducting a study of rice plants inoculated with the fungus. So far, the inoculation has resulted in larger populations of rice water weevils. “We were surprised to see a negative impact making rice more susceptible to insects,” Stout said.

He said seed treatments work well against the weevil larvae that feed on the roots of rice plants. All rice varieties are susceptible to weevil infestations, he said, so work is being done to develop varietal resistance.

Stout said the heavy rains appear to have made no difference in insect populations so far. “This has been a pretty typical year for insects.”

Harrell said the heavy rains have caused problems for getting crops planted and fertilized on time.

He said if fertilizer that must be applied on a flooded field will not benefit from a nitrogen stabilizer such as Agrotain.

Harrell said leaf blast has been found on Jupiter and CL151 varieties. He said sheath blight will be developing, and a fungicide is recommended when panicles in the plant boot grow to 4 inches.

Steve Linscombe, LSU AgCenter rice breeder, said work on the new Provisia rice technology is progressing with the possibility of a 7-acre seed increase in Puerto Rico later this year.

He said the herbicide-resistant Provisia system will give farmers additional help at controlling the red rice weed and provide control of weedy rice that is resistant to NewPath herbicide as a result of outcrossing between Clearfield rice and red rice plants.

Linscombe said this is the 14th year he has conducted his variety trial at the Bieber Farm where part of the June 9 field day was held. He said the plots’ late planting will provide an idea of how the varieties perform when they are planted under less than ideal conditions.

Linscombe said a new medium-grain line, 1402008, is showing potential for acceptance by Kellogg’s.

Hybrid breeding continues, he said. “I feel confident that in a short period of time, we’re going to be talking about the first hybrid coming out of Crowley.”

Ron Levy, LSU AgCenter soybean specialist, said his research will include irrigation this year with projects in Evangeline and Calcasieu parishes. Soil moisture sensors will be used to help determine when soil needs irrigation, he said, and they can help reduce the amount of water needed.

He said the critical time for soybeans to get moisture is in the R-3 and R-5 stages.

Boyd Padgett, LSU AgCenter plant pathologist, said no Cercospora blight has shown up yet, but soybean rust is being found in coastal areas. Farmers should consult varieties’ disease ratings and use crop rotation. Reduced tillage can leave plant debris that holds pathogens, he said.