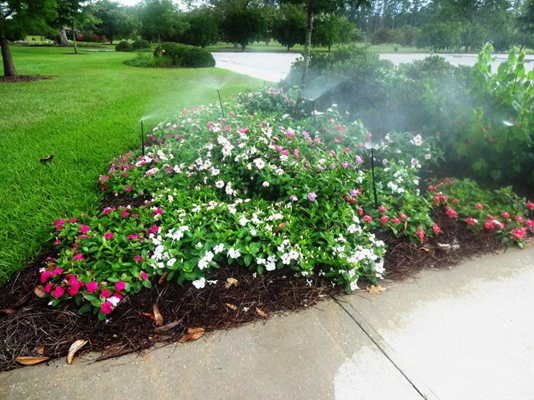 Overhead irrigation of vinca in the landscape should be avoided. (Photo by Allen Owings, LSU AgCenter) 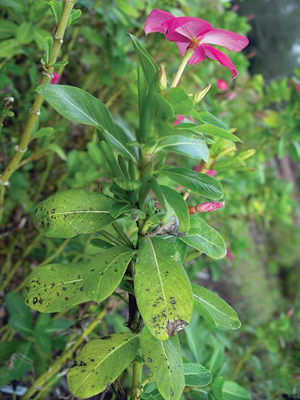 Vinca Alternaria leaf spot can be a problem in the late summer and fall. (Photo by Yan Chen, LSU AgCenter)

Vinca is one of the best bedding plants for summer flowers in Louisiana when proper management practices are followed. (Photo by John Wozniak, LSU AgCenter)

HAMMOND, La. – One of the most popular annual bedding plants in Louisiana is vinca, or periwinkle. It is well-known for its prolific and long blooming season and is the favored flowering plant of choice for home gardeners and professional landscapers around the state for warm season color, said LSU AgCenter horticulturist Allen Owings.

Vinca (Catharanthus roseus) is a heat- and drought-tolerant plant that normally thrives under Louisiana growing conditions, Owings said. The past spring, however, has been cool and very wet – conditions that are much less than favorable for this popular bedding plant to perform well.

Thirty years ago, periwinkle flower colors were limited to white, white with a red eye and a rosy purple. Breeding work in the 1980s involved crossing Catharanthus roseus with other species to improve the color range, increase blooming and flower size and improve the growth habit.

Vincas now come in a plethora of colors, including pink, deep rose, red, scarlet, white, white with a red eye, lavender blue, peach, apricot, orchid, burgundy and many other shades, Owings said. They generally grow from 10 to 18 inches tall with a spread of about 1 foot, although trailing types spread to about 2 feet.

“Even with improvements in the plant, a number of diseases still limit vinca performance in Louisiana and other southern states,” Owings said.

“This pathogen has always been present in our soils and can devastate vinca plantings,” Singh said.

The disease is favored by warm, wet weather and rapidly spreads during extended periods of rainfall, Singh said. And compacted soils with poor drainage may predispose roots to Phytophthora infections.

The pathogen is responsible for causing root and crown rot, and the affected plants appear blighted. Symptoms on above-ground plant parts appear as water-soaked, greasy lesions on the foliage and on the base of the affected shoots. Individual shoots wilt and weaken. As the disease develops, reddish, dark brown cankers appear on the stems.

The pathogen also causes root rot, resulting in the roots shedding their outer layer, Singh said. Often, sections of the plant wilt and turn brown while other parts remain healthy.

“A severe attack can essentially wipe out an entire planting,” Singh said.

Fungicides for home gardens and commercial landscapes are available to manage Phytophthora blight, he said. In addition to fungicides when the disease is present, good management is essential to combat the disease.

“If you want to have the best vinca in your landscape, consider these practices,” Owings said.

– Prepare the landscape bed to allow for drainage and aeration. Raise the bed at least 6 inches if drainage is questionable.

– Plant in soil with a pH level of 5.5. Vincas need acidic soil.

– Avoid planting earlier than May. Soil and nighttime temperatures need to be warm prior to planting. May 1 is the recommended planting date. Many times, home gardeners and landscapers plant vinca in landscape beds in late March and April.

– Plant so that the top of the root ball is level with or slightly higher than the soil of the bed. Proper spacing also is important because crowded planting limits air circulation and can create conditions more favorable for disease development. Space transplants at least 10-12 inches apart.

– Mulch with pine straw to decrease splashing of rainfall and irrigation water from soil to the lower stems and foliage of the plants. However, avoid excessive mulching to prevent continuous wetting of the plant crowns.

– Manage irrigation properly. Vinca require minimal irrigation. Avoid overhead irrigation, when practical. When plants make it through the spring and early summer without disease, hold back irrigation or Alternaria leaf spotting – another fungal disease – may develop heading into fall.

– Don’t plant vincas in the same bed year after year.

– Don’t plant periwinkles in beds where Phytophthora blight has been a problem in the past.

“There is good news,” Owings said. “New vinca varieties are resistant to some diseases.”

The Cora and Nirvana series are some of the newer vincas that have genetics in the breeding that makes these varieties resistant to Phytophthora blight.

“These have been evaluated in landscape trials at the LSU AgCenter Hammond Research Station and at the AgCenter Botanic Gardens at Burden with good results,” Owings said. “And more new vincas are coming in 2016 that offer improvements in disease performance.”