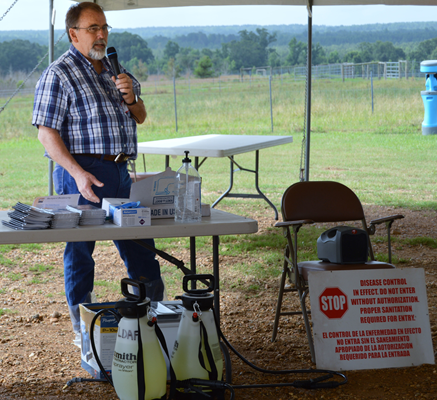 Mike Barrington, veterinary medical officer with the Louisiana Department of Agriculture and Forestry, explains the importance of biosecurity in the prevention of poultry diseases during a poultry field day at the LSU AgCenter Hill Farm Research Station on June 16. (Photo by Brandy Orlando, LSU AgCenter) 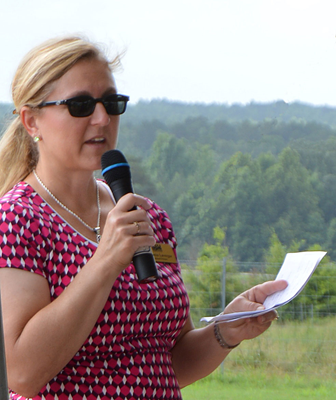 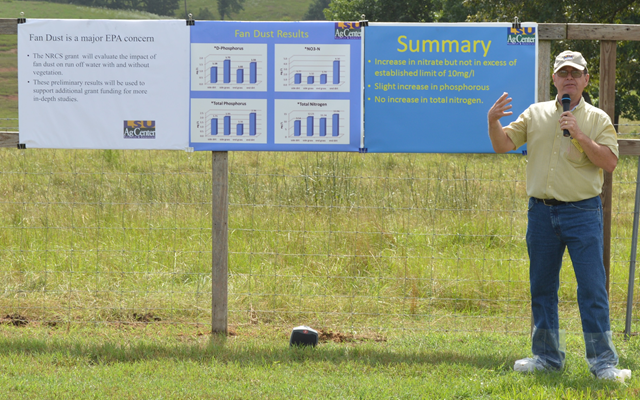 “Biosecurity needs to be in place at all times, every day of the year,” Barrington said. “The United States has been under a high path avian influenza epidemic since mid-December. It’s a hot-button issue right now.”

Since mid-December, the epidemic has affected 21 states. The U.S. has lost nearly 50 million birds because of infection or because they were in a contact zone, Barrington said.

“There are currently 230 infected premises in the Midwest. Today we have incurred costs of over $500 million to try and stamp out these contact zones,” he said.

“It has affected 10 percent of our table egg layers, 7.5 percent of turkeys and 6 percent of pullets. As a consumer, we are already seeing that reflected in the price of eggs,” Barrington said.

The one thing that stops avian influenza is heat, so the upcoming summer heat is really a blessing, he said. “We have gone 10 days in the Midwest without a new case.”

“It uses composting technology,” Lavergne said. “And the advantages of that technology reduce litter pathogens by 95 percent or more to make the litter safe for reuse with the next flock.”

Windrows should average 4-5 feet in width and 2-3 feet in height in order to produce the temperature that kills pathogens. “Within three to four days, you should reach the 131-degree temperature,” she said.

Key points to consider when windrowing are moisture, time and turning, Lavergne said. “Between 30 and 32 percent moisture is the ideal range needed to reach the required temperature, but the temperature can be reached with lower moisture levels.”

Lavergne recommends turning the litter after three or four days to get a more thorough and uniform temperature rise throughout the entire stack.

“Time is critical,” Lavergne said. “If you do not have a minimum of 10 days, windrowing will not be an effective management tool.”

“A major benefit to windrowing is it can be done anytime of the year regardless of the temperature outside since the temperature is generated within the litter inside of the poultry house,” Lavergne said.

Bill Owens, resident coordinator for the Hill Farm Research Station, covered the results from testing runoff water and looking at the impact of fan dust as a possible source of pollution.

“Fan dust is an area of concern for the Environmental Protection Agency and needs to be researched to determine its potential impact,” Owens said. “We wanted to see how much does the fan dust actually contribute to pollution and the runoff occurring at Hill Farm.”

Units at strategic locations without vegetation near exhaust fans around broiler houses collect runoff samples and test the effects of a grass buffer zone for water quality analysis.

“In our research, we didn’t see a big impact of the fan dust except with nitrate,” Owens said. “We saw an increase in nitrate with the unit that didn’t have a grass buffer zone; however, the nitrate levels did not exceed the recommended level. It did not become critical, but it did rise. It does show that a grass buffer zone will help.”

Owens demonstrated the Ecodrum Composter, which turns slowly once a day, and the temperature rises to around 140 degrees when decomposition begins.

“The end result is a fairly uniform product,” Owens said. “It generates a small amount of material, and we spread it out just as we would litter.

“We plan to keep experimenting and use it to evaluate a variety of composting materials, eventually to compost with litter,” Owens said.