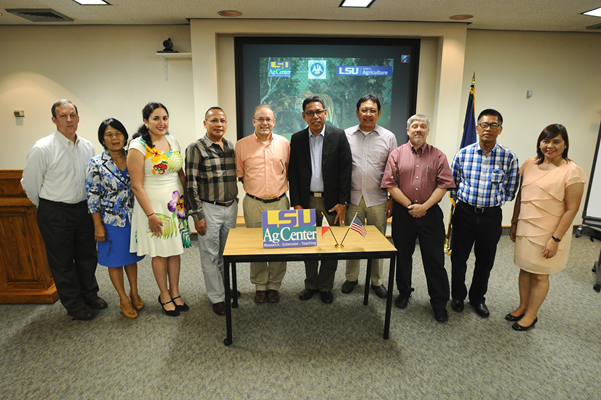 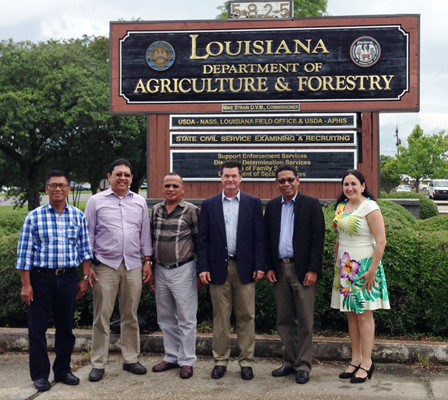 BATON ROUGE, La. – A group of managers with the Philippines’ Department of Agriculture is visiting Louisiana June 15 to 17 to learn about the LSU AgCenter’s rice research and outreach efforts.

The managers are in charge of the Philippine government’s National Rice Program, which works to improve food security and farming practices.

At the AgCenter, the group is learning about rice production and economics and the role of the AgCenter and Louisiana Department of Agriculture and Forestry in the state’s agriculture industry, said Susan Karimiha, AgCenter International Programs coordinator. They attended the Acadia Parish Rice Field Day and toured local farms and rice mills on June 16.

“This particular visit is an excellent opportunity for the LSU AgCenter to build collaborative linkages with the Philippines and learn about issues facing rice farmers and agricultural researchers,” Karimiha said.

Rice is a staple food in the Philippines, where it accounts for between 20 and 30 percent of an average household’s expenditures, according to the National Rice Program’s website. About 32 percent of the population is employed by agriculture, many of whom farm the nation’s nearly 8 million acres of rice.

The Philippines is the eighth largest rice producer in the world, but it is also the top rice importing country. Demand is high because at least 26 percent of the rapidly growing Philippine population lives below the poverty line and depends on rice as a major part of their diet.

“Our challenge is the growing population,” said Edilberto De Luna, assistant secretary of the Philippine Department of Agriculture and coordinator of the National Rice Program. “We hope to grow more rice because rice is a pretty good meal for Filipinos.”

There are many similarities between Louisiana and the Philippines, De Luna said. Both have a hot and humid climate as well as a strong cultural connection with rice.

“We want to know modern research and extension strategies so that we’ll be able to pick up lessons that are applicable in our country to increase productive and improve the income of Filipino farmers,” he said.

Philippine extension educational work is mostly done through the national Department of Agriculture, while it is conducted through land-grant universities in the U.S. Lucrecio Alviar, regional executive director of the National Rice Program, said there is only one extension agent for every 500 farmers, which is problematic amid efforts to grow more rice.

After leaving Louisiana, the Filipinos will travel to Arkansas to visit rice farms, research stations and milling facilities. Their trip to the U.S. was organized by the USA Rice Federation, Embassy of the Philippines in the U.S. and the International Rice Research Institute.