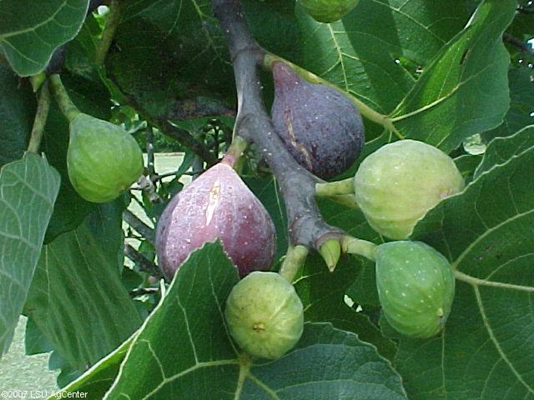 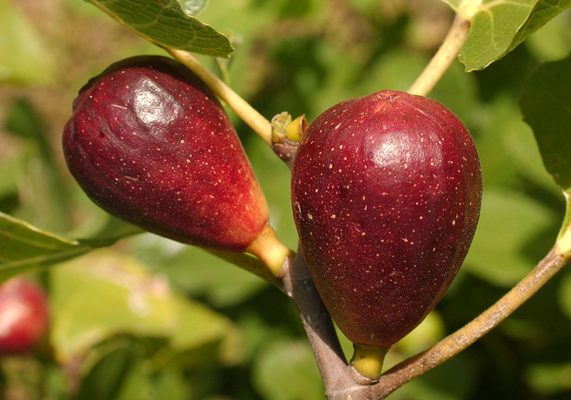 BATON ROUGE, La. – June is time for figs in Louisiana, and many of the popular varieties around the state have come from a breeding program at the LSU AgCenter.

It started back in the mid-1950s, said LSU AgCenter horticulturist and fruit plant breeder Charlie Johnson. That’s when Ed O’Rourke joined the LSU Department of Horticulture as a fruit breeder.

The most popular fig variety grown in Louisiana is Celeste, which has been around for more than 100 years, Johnson said. Elsewhere in the Southeast, Brown Turkey enjoys greater popularity.

Because fig trees are easily propagated, the Celeste variety can be found almost anywhere in Louisiana. Figs can be propagated by cuttings, he said. “You can take a twig and stick it in the ground, and it will root and become a tree.”

Fig is a good pass-along plant, Johnson said. “The same variety may have as many as 25 ‘names,’ because someone got a cutting from someone else, who got that from someone else. And many times they come with the name of the person who provided the cutting.”

Homeowners can propagate their fig trees buy burying a low branch in the soil or by air layering – making a slit in a branch, wrapping it with damp sphagnum moss or even newspaper, and covering it with plastic wrap to hold in the moisture. In either case, roots should develop within a couple of weeks, Johnson said. Then the cutting can be transplanted into the soil or a pot.

Those methods, along with simply sticking a twig into soil, are the easiest ways for sharing a tree with a friend or neighbor.

“Figs are fun to grow and collect,” Johnson said. “You can grow them in 5-gallon or 10-gallon pots and put many different varieties in a backyard.”

Even with so many backyard plants being shared throughout Louisiana, the AgCenter revived O’Rourke’s research in 1990 and began releasing new varieties. “Since then, we’ve released LSU Purple, LSU Gold, Tiger, Champagne and O’Rourke, which we named after Ed,” Johnson said.

The releases were collected from O’Rourke’s original crosses that were developed over a 10-year period from the mid-1950s until the mid-1960s. O’Rourke used a variety called caprifig from California as the male parent and the varieties Celeste from Louisiana and Hunt from Georgia as the female parents.

When the fig breeding program was interrupted in the mid-1960s, O’Rourke had hundreds of trees planted in several locations in Louisiana. Those AgCenter trees, however, survived.

“They were planted at the AgCenter Hammond Research Station, on the Baton Rouge campus and at other research stations,” Johnson said.

In the 1990s, Johnson and AgCenter fruit specialist Jimmy Boudreaux worked with O’Rourke to identify the various plants that had come from O’Rourke’s earlier research.

“We collected and identified individual plants from Ed’s original work,” Johnson said. “We compared them in several locations and assured they were truly AgCenter varieties.”

After the trees were collected and identified, the researchers began evaluating what they had before they could release them to the public. They looked at fruit size, cold-hardiness and disease resistance among other attributes.

“To truly evaluate figs, you need trees of the same age in the same soil,” Johnson said. “So we compared our trees with other known varieties over a five-year evaluation before we considered them for release.”

The AgCenter released the varieties LSU Purple in 1991 and LSU Gold in 1995. Then in 2007 it released three more varieties – Tiger, Champagne and O’Rourke.

Tiger fruit is 30 to 50 percent larger than Celeste, Johnson said. It matures seven days earlier and has a longer fruiting period on a relatively small tree. “It’s good for the backyard.”

Champagne is yellow with good cold resistance, Johnson said. A brown streak shows when the fruit is ripe. “Birds seem to be able to see the yellow figs better, so they’re more of a problem,” he said.

O’Rourke is much the same as Celeste but with larger fruit and more productivity. “We call it an ‘improved Celeste,’” Johnson said.

The AgCenter has additional fig varieties being evaluated for release.

One variety, L55-2-66, is a black fig that ripens later than others – about the third week of July, Johnson said. It’s black with a strawberry-red pulp.

Historically, AgCenter fig varieties have been released as public varieties – they have no plant patent protection and are available for any nursery or individual to propagate and sell.

Taking care of fig trees is relatively easy, which makes them popular in home landscapes.

Maintaining the trees is straightforward, Johnson said. Unlike many other fruit trees, figs make new fruit on new growth that comes in spring, so winter pruning doesn’t cause problems.

“Pruning is almost a necessity to keep fig trees in bounds,” Johnson said. “It’s better to keep space under the tree open for air circulation and to keep the center clear for sunlight.”

The height should be “about as high as you can reach with a pruning sheer – about 8 1/2 feet,” he said.

Figs can be grown totally organic, Johnson added. “In fact, few pesticides are labeled for figs.”

Fig leaf rust is the primary disease affecting the trees. Under the right conditions, it appears in June and is full-blown by July after the fruits mature. The disease doesn’t appear to hurt the trees, however. Leaves fall and new leaves appear almost immediately.

The spores live on diseased leaves on the ground and are blown by wind up into the new leaves, which then are infected, turn brown and fall off. “This cycle of defoliation and regrowth can happen three to four times in a wet summer,” Johnson said.

Trees with rust resistance, however, present a drawback. Without defoliation, trees stay green longer into the fall and are more susceptible to winter cold damage.