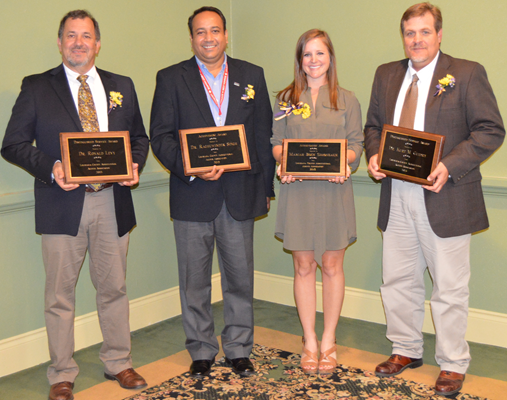 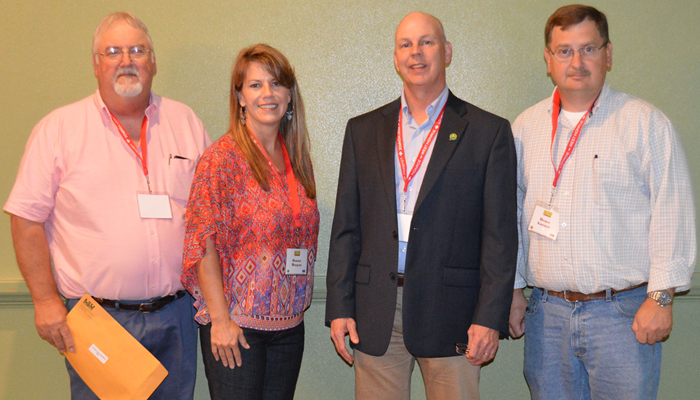 MONROE, La. – The Louisiana County Agricultural Agents Association members presented awards and installed the 2015-2016 officers during their annual conference in Monroe May 31-June 4.

The awards ceremony is one of the highpoints of the conference, said LCAAA past president Richard Letlow, extension agent in Ouachita Parish. Two awards were presented for distinguished service and two for achievement.

The Distinguished Service Award recognizes an agent who has dedicated 10 or more years of service to the LSU AgCenter. This year’s recipients were Kurt Guidry and Ronald Levy.

Guidry is a professor and extension economist with the Department of Agricultural Economics and Agribusiness. His primary educational focus is providing research-based information in farm management and marketing targeted to the soybean and feed grain industries in the state.

Levy, an assistant professor and extension soybean specialist, is based at the Dean Lee Research and Extension Center in Alexandria. His responsibilities include statewide soybean educational programs, soybean variety testing, and training and support for extension field faculty for all aspects of soybean production.

The Achievement Award recognizes an agent who has dedicated less than 10 years of service to the LSU AgCenter. This year’s recipients were Raghuwinder “Raj” Singh and Mariah Simoneaux.

Singh, an assistant professor and plant pathologist in the Department of Plant Pathology and Crop Physiology, directs the Plant Diagnostic Center. His responsibilities include plant disease educational programs and support for extension field faculty in diagnosing plant disease problems.

Simoneaux, an extension agent in St. James and St. John parishes, serves as the horticulture agent for the Southeast Region.