Conference kicks off Farm to School program in Louisiana 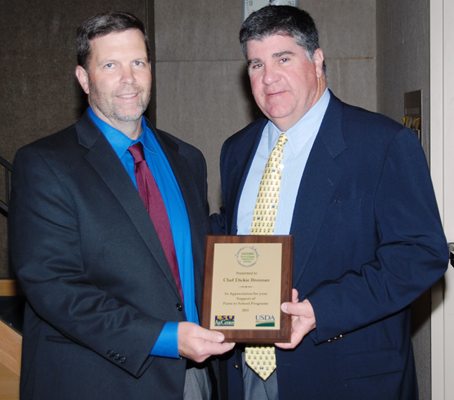 John Dupre, left, director of the Division of Nutrition Assistance in the Louisiana Department of Education, presents New Orleans chef and restaurateur Dickie Brennan a plaque in appreciation of his lifetime support of Louisiana culture, food and education. The presentation was made during the Louisiana Farm to School Conference on May 27 in Baton Rouge. (Photo by Rick Bogren, LSU AgCenter) 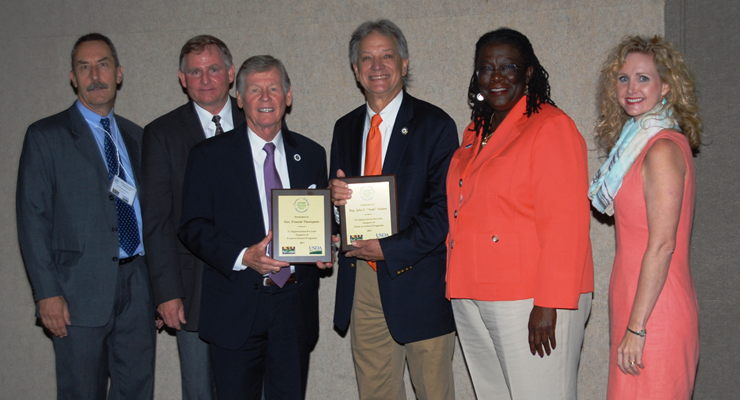 BATON ROUGE, La. – Louisiana organizers kicked off a conference on May 27 to bring farm-to-school advocates together to encourage introducing local foods into schools and promote food and agriculture education.

Under the auspices of the LSU AgCenter, 200 people met to network and learn about successful farm-to-school programs in Louisiana.

The farm-to-school conference was designed to bring together people from throughout Louisiana to learn from each other and encourage expansion of farm-to-school programs in the state.

Farm-to-school activities will continue in Louisiana during the summer. The group has planned regional meetings for New Orleans on July 14, Alexandria on July 16 and Ruston on July 17 based on discussions among regional representatives during the Baton Rouge meeting.

Bringing people together is important to see what others are doing, said Sara Tedeschi, with the National Farm to School Network.

“To make an impact broad and deep, we need partnerships,” Tedeschi said. “I believe this work is important, is necessary, is creating change in children.”

The conference serves as an opportunity for local producers to expand markets for their products by providing locally grown food for cafeterias, said Rogers Leonard, LSU AgCenter program leader for plant and soil sciences.

It can become an umbrella for the food system network of production, processing, distribution and preparation, Leonard said. The goal is to create awareness and bring together members of the food system.

State Sen. Francis Thompson, Delhi, and state Rep. John F. “Andy” Anders, Vidalia, were presented plaques in recognition of their work to support farm-to-school programming in Louisiana. Both are chairs of their respective Agriculture, Forestry, Aquaculture and Rural Development committees.

Thompson introduced legislation this year to authorize the state Department of Education and any nutrition program provider to use simplified procedures of small purchases in order to support procurement of local agricultural products for school nutrition programs.

Thompson cited the need to invest in safe, quality and abundant local food for students in Louisiana and said his bill is intended to encourage local farmers to work with schools.

“It’s always been about bringing local food from the farm to the table,” Brennan said. “Here in Louisiana, we can grow something all year.”

Brennan talked about his relationship with the Edible Schoolyard program, where he serves on the volunteer task force.

When parents and their children visited the school gardens, the adults selected produce they knew, he said. But the kids started telling their parents about the vegetables the parents weren’t familiar with.

“There’s opportunity in the food world,” Brennan said. “It’s important with kids that we expose them and teach them about these wonderful foods.”

John Dupre, director of the Division of Nutrition Assistance in the Louisiana Department of Education, presented Brennan a plaque in appreciation of his lifetime support of Louisiana culture, food and education.

“We want to nourish, sustain and teach,” Dupre said. “We want the opportunity to make connections between schools and farmers to take advantage of these relationships.”

Katie Mularz, Louisiana state lead for the National Farm to School Network, introduced a state success panel that provided participants with the opportunity to tell about their programs and successes.

The panel highlighted farm-to-school programs from Shreveport to New Orleans.

Travis Johnson, the district chef for Sodexo in New Orleans, talked about bringing foods from growers to students at farmers markets on individual campuses.

Deborah Coleman with FIT for Kids, an LSU AgCenter program in Shreveport, is working with students in an afterschool program to grow their own food and then learn to cook it.

The Food Bank of Central Louisiana uses a renovated beer truck called the Nutrition on Wheels Project to serve as a mobile pantry and nutrition education site.

The conference also introduced the National Farm to School Network’s Seed Change program to support farm-to-school programming. The network selected Louisiana as one of three states to participate in a grant program offering 20 to 30 grants of $5,000 each for Louisiana schools and school districts, Tedeschi said.

The program supports the farm-to-school elements of education, nutrition and procurement as well as school gardens. Mini grants are funded by the Walmart Foundation, and applications are available online at www.farmtoschool.org/seedchange. The deadline is June 15.

“The timing is right in Louisiana,” said LSU AgCenter extension associate Ann Savage, who serves as the program director for the Louisiana Harvest of the Month Program, a pilot program working in three Louisiana schools to deliver farm-fresh local produce to school cafeterias. Savage also served as the conference organizer.

“The conference was a perfect time and place to plug these mini grants being offered,” Savage said. The regional meetings will be a great way to keep momentum going strong in the areas after these grants are over. I think we have an exciting future in farm-to-school in Louisiana.”

The conference and regional meetings are funded through a U.S. Department of Agriculture Farm to School Conference grant.