AgCenter experts give farmers advice for the 2015 growing season 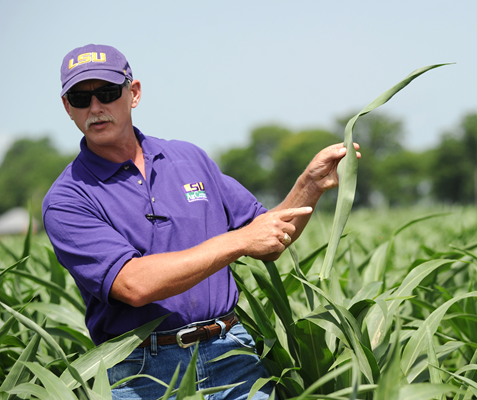 ST. JOSEPH, La. – Excessive rain during the 2015 growing season has presented challenges for Louisiana farmers, but LSU AgCenter experts told attendees at the Northeast Research Station Pest Management and Crop Production Field Day on June 17 that they need to consider other problems that could affect their crops.

Cotton farmers need to carefully scout their fields for target spot disease, said AgCenter plant pathologist Trey Price. Louisiana cotton historically has not been affected by the disease, which results in plant defoliation.

“It can’t be seen from the turn row, and it can defoliate cotton in a hurry,” he said. Target spot lesions initially form low in the canopy. It can be worse in varieties that grow tall with dense foliage.

Currently, there are no cotton varieties resistant to this disease.

Disease problems in corn have been minimal, Price said, although some cases of Northern leaf blight are popping up. He doesn’t expect it to be a big threat to yields, so fungicide applications are generally unwarranted. To help farmers detect the disease and determine severity, he has put together a pictoral guide, which can be obtained by contacting him at pprice@agcenter.lsu.edu.

Soybean farmers should be on the lookout for frogeye leaf spot, although he hasn't received any calls about it so far this year, Price said.

Josh Copes, AgCenter research associate, said a combination of Dual II Magnum and atrazine is providing good control of most grass and broadleaf weeds in grain sorghum. Zest, a new herbicide that has not been released commercially yet, will provide johnsongrass control when used in Inzen grain sorghum, a non-GMO crop under development by Dupont.

Donnie Miller, AgCenter weed scientist and research coordinator at the Northeast Research Station, talked about two new technologies that have been extensively evaluated for several years. Soybean and cotton varieties should be commercially available by next year that will tolerate 2,4-D (Enlist system) and dicamba (Xtend system).

Miller said that both technologies will add more bullets to the arsenal against glyphosate-resistant weeds, such as Palmer amaranth. It will be critical to follow labels to help avoid off-target movement and injury to sensitive crops.

Rick Mascagni, AgCenter agronomist, told attendees about early-maturing sorghum varieties he is evaluating. Some hybrids head about two weeks ahead of conventional varieties, which is good for farmers who want to ratoon crop.

A team of irrigation experts told farmers about irrigation technology that will help them manage moisture in their fields once normal rainfall patterns return to Louisiana.

Dennis Burns, LSU AgCenter county agent in Tensas Parish, said flow meters are available at the Northeast Research Station for farmers to determine the output of their wells. He said surge valves can be purchased that will improve irrigation efficiency by as much as 10 percent.

James Hendrix, extension agent who works with the Master Farmer Program in northeast Louisiana, said well water should be tested with conductivity meters for pH, salinity and sodium.

David Kerns, LSU AgCenter entomologist, said a research project is underway to determine which grain sorghum hybrids have resistance against the sugarcane aphid. He said heavy rains have been washing away aphid colonies on sorghum plants, and beneficial insects have been controlling the pest.

Brown cautioned farmers to scout frequently for aphids. He said an infestation left untreated or treated too late can devastate a crop, and even the sugary residue left by the insect can clog and damage harvest equipment.

Beatrix Haggard, LSU AgCenter upland row crop fertility specialist, showed farmers the noticeable advantages of using products to promote enhanced nitrogen efficiency. The products prevent nitrogen losses in the presence of excess moisture, and Haggard said this has been a good year to test the products.

Corn plants treated with the products showed a noticeable height and appearance difference.

Ina Sanchez, an agronomy graduate student, talked about the use of cover crops in the off-season. A cover crop such as crimson clover or radishes can improve yields considerably, she said.

Ron Levy, LSU AgCenter soybean specialist, said this year’s soybean crop in Louisiana will probably total around 1.5 million acres, compared to 1.4 million last year. He said many soybean fields in the northwest part of the state remain flooded from the Red River.

“Some of them aren’t going to make it,” he said.

Cotton acreage this year will probably reach 140,000 acres, Fromme said. Cotton plant growth has been delayed by the waterlogged soil in many areas, he said.

Eric Webster, LSU AgCenter weed scientist, said he is testing nine new experimental herbicides for rice. One of the products, benzobicyclon, will be excellent for aquatic weeds, he said, but the material requires two to three weeks to be effective.

LSU Vice President for Agriculture Bill Richardson told attendees the AgCenter survived a “very difficult” legislative session, which ended June 11. But thanks in part to concerns voiced by farmers, steep budget cuts to the AgCenter and the rest of higher education were avoided.

However, “we lived to fight again” because the state budget deficit will likely be an issue again next year, Richardson said. He encouraged attendees to continue talking to their state legislators about the importance of research and extension activities and to keep in touch with local AgCenter offices.

“It’s because of you telling us what you need that we can be successful,” said Tara Smith, AgCenter northeast regional director.

Rogers Leonard, AgCenter associate vice chancellor for plant and soil programs, said commodity groups and chemical companies have also been helpful in demonstrating the vitality of the AgCenter to the state’s agriculture industry. Such groups funded a number of the projects that researchers discussed at the field day.

“Industry partnerships are critical to the research done at these stations,” Leonard said.

A schedule for other AgCenter-sponsored field days can be found here or by searching for 2015 field days at www.LSUAgCenter.com.