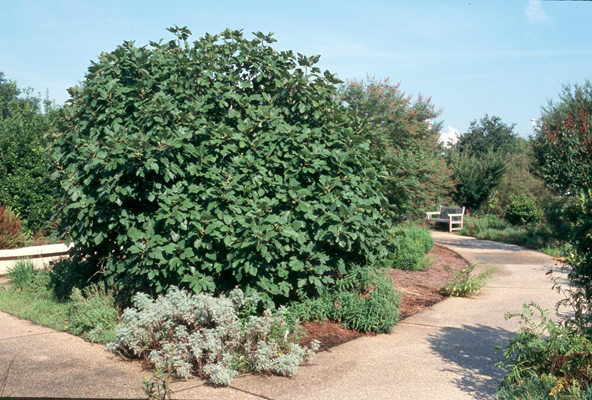 Fig trees can enhance a landscpe as well as produce delicious fruit. (Photo by Allen Owings)

Figs are one of the most widely planted fruit trees in home landscapes in Louisiana. With little care, they will produce crops of juicy, sweet figs every July.

The fig, Ficus carica, is native to Asia Minor and is thought to be one of the earliest fruit trees cultivated by humans. It belongs to a group of plants which have milky sap, or latex, and includes the rubber tree (Ficus elastica) along with a number of popular houseplants. Be aware that contact with fig tree foliage can cause dermatitis in some people.

Numerous varieties of figs are available at area nurseries and even more online. I imagine all would do well in Louisiana. One of the most popular and reliable is Celeste, which produces small to medium-size fruit resistant to splitting and souring. The fruit is violet to brown with a light strawberry-colored pulp.

LSU Purple was released by the LSU AgCenter in 1991 and has medium-size, dark purple fruit and good resistance to foliage diseases. Its tendency to produce two crops, a heavy main crop in July and a later crop sometimes lasting into December, makes it popular.

Florentine, also known as Kadota and lemon fig, produces large, green-yellow fruit and sometimes follows up with a moderate crop in the fall.

Now through early March is a good time to purchase fig trees from local nurseries and plant them in the landscape. Although not huge as trees go, fig trees will grow 15 feet or more high and wide. Make sure you have adequate room where you plant a fig tree.

Also plant them in a sunny location away from large trees with overhanging branches so they will receive at least six hours of direct sun daily. More is better.

Fig trees ordinarily do not produce a good crop of fruit until the third or fourth year after planting. You will generally see small green figs where the leaves join the stem, even on very young trees. But these fruit usually fail to ripen and just drop off. LSU Purple is an exception, often producing small crops one to two years after planting. Figs bear their main crop on new growth produced during spring and early summer.

You may train your fig into a large bush-like shape with several trunks or into a more typical tree shape with a single trunk. Pruning established figs is best done by late February. Pruning helps maintain vigor, create the desired shape of the tree and control its size. It is better to cut a fig back a moderate amount every year or two rather than let it get to the point where severe pruning is required.

If substantial cutting back is done to rejuvenate or reduce the size of an older tree, fruit production the following summer will generally be reduced. The tree should, however, produce well thereafter.

Regular spraying with pesticides is generally not necessary on fig trees. The only common problems are two fungus diseases that attack the foliage. Thread blight causes problems early in the season, and fig rust causes leaf spotting and scorch in late summer and fall.

Two spray applications of copper-based fungicide, one in May and another in August, will generally keep these diseases from being too destructive. But gardeners rarely spray fig trees, and the trees manage to survive these problems with no long-term health issues.

Occasional problems with white, fuzzy mealybugs can be controlled with light horticultural oil. Old trees may develop rot in the trunk and major branches. For this there is no treatment.

When the figs begin to ripen in early July, another problem almost always shows up. Birds love figs and eat holes in a lot of the ripe fruit. The best defense is to cover your tree with bird netting available local nurseries. If you would rather not use bird netting –birds may get caught in it – place aluminum pie pans, plastic owls, rubber snakes and other “scarecrow” objects in the tree once the fruit begins to ripen. Try to move the objects around every few days so the birds do not become accustomed to them.

Although figs can produce well here without it, fertilizer may boost production and the vigor of the trees. A general recommendation would be to apply a general-purpose fertilizer following label directions in February or early March.

Newly planted figs will definitely need to be watered their first summer as they become established. During dry spells in summer, water young trees weekly by letting a hose trickle water at the base of the trunk for 20 to 30 minutes. Water established trees for about 45 minutes with a sprinkler that covers the entire area under the tree during hot, dry summer weather. Repeat watering at five- to seven-day intervals as long as weather is dry.

Fig trees may drop fruit if they are drought stressed, and once the crop is damaged, supplemental watering will not correct the problem. Pay attention to watering because this is one of the few things figs are picky about. Because fig trees have relatively shallow root systems, a 4-inch layer of mulch, such as leaves or pine straw, spread over the soil under the canopy of the tree, is also highly recommended to keep the roots moist.