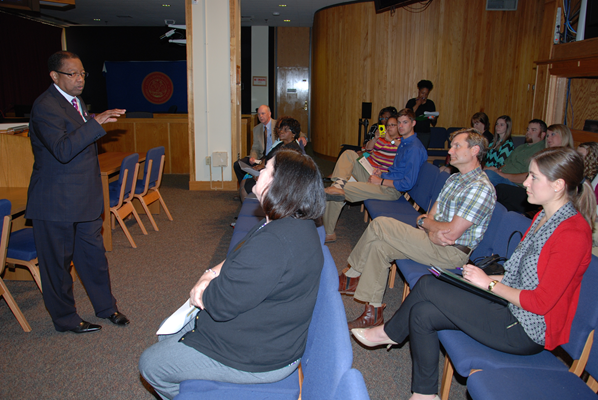 BATON ROUGE, La. – Each year, the LSU AgCenter and the Southern University Agricultural Research and Extension Center give an annual report to the East Baton Rouge Parish Mayor-President and members of the Metro Council. This year’s event was held on April 8.

Mark Williams, LSU AgCenter county agent and parish chair for East Baton Rouge Parish, said the event is a way to inform the elected officials of accomplishments at the two institutions over the past year.

East Baton Rouge Parish Mayor-President Kip Holden explained the importance of the work being done by the two agricultural centers.

“We have a long history of working with these centers,” Holden said. “The work that is done with the kids is phenomenal.”

Holden said the centers help people across the state get information to make their lives better.

The luncheon provides an opportunity to show appreciation for the support from the parish, said LSU AgCenter Southeast Region Director Regina Bracy.

“It allows us to showcase what we do and where in the parish,” Bracy said. “And like several of the council members mentioned, they weren’t aware that the programs were being conducted in their particular district.”

One of the volunteers who gave a testimonial was Mamie Frazier from Project Head Start in Scotlandville. She said the LSU AgCenter has been a godsend for her program.

“We have learned so much from the LSU AgCenter,” she said. “When they come, they not only teach the children about eating healthy, but they teach the parents how to shop for healthy food as well.”

Frazier is impressed by the insulated shopping bags the LSU AgCenter has provided to the parents in her program.

“Some of our parents have to walk four or five blocks to catch the bus just to get to the grocery store,” Frazier said. “These bags help to keep their meat from getting warm on the return trip.”

Jeff Kuehny, resident director at the LSU AgCenter Botanic Gardens, discussed the programs at his facility, including a children’s garden, wetlands area and walking trails.