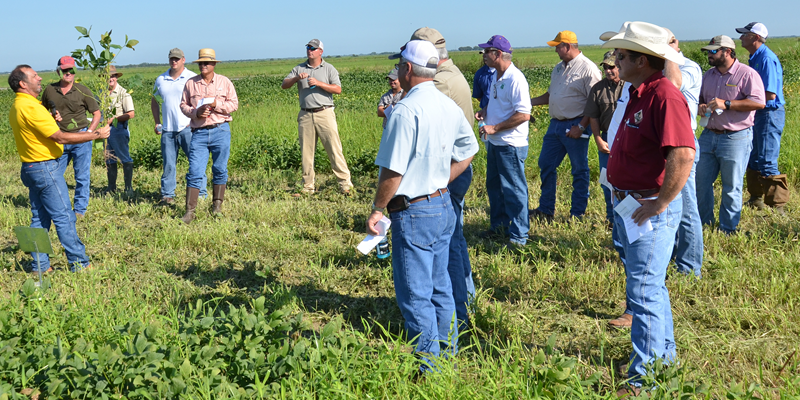 LAKE ARTHUR, La. – With good moisture and light pest pressure, this year’s Louisiana soybean crop has the potential for another record-breaking year, according to LSU AgCenter soybean specialist Ron Levy.

Levy said Thursday (Sept. 4) that he has been surprised that excess rainfall has not ruined many soybean fields throughout the state. “We’ve had soybeans that have been underwater two or three times,” he said.

Some soybean fields in Avoyelles Parish suffered from scalding after heavy rainfall there, and some soybean plants have fallen over because of stormy weather in central and north Louisiana, Levy said.

Some of the early soybeans in north Louisiana have yielded 60-80 bushels an acre, while yields from bean crops grown on sugarcane ground have ranged 50-90 bushels per acre, he said. Average statewide yield in 2013 was nearly 49 bushels per acre, according to the AgCenter 2013 Ag Summary.

As the rest of the soybean crop nears maturity, ripeners can be used as soon as the seed membranes separate from the seedpod, he said. But he reminded farmers that most harvest aids, such as paraquat, require up to 15 days before harvesting.

LSU AgCenter entomologist Jeff Davis said soybean loopers have been found, but spraying them will also kill natural predators. Once a soybean field reaches the R-6 growth stage, he said, spraying should not be done for loopers because the insect will cause little damage to the crop, and their feeding will help defoliate the plants.

But at the R-5 growth state, soybeans are more susceptible to damage and should be sprayed if the pests exceed the threshold of more than 150 worms per 100 sweeps.

Davis said redbanded stinkbugs have not been much of a problem this year.