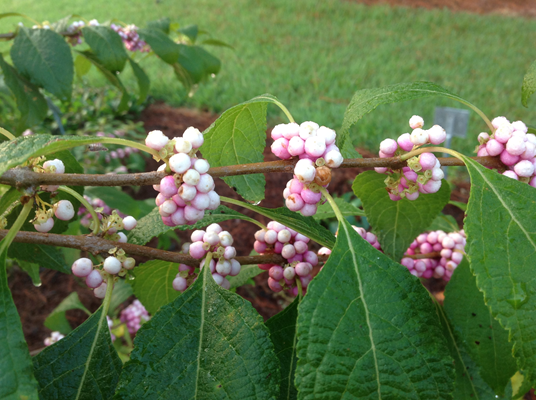 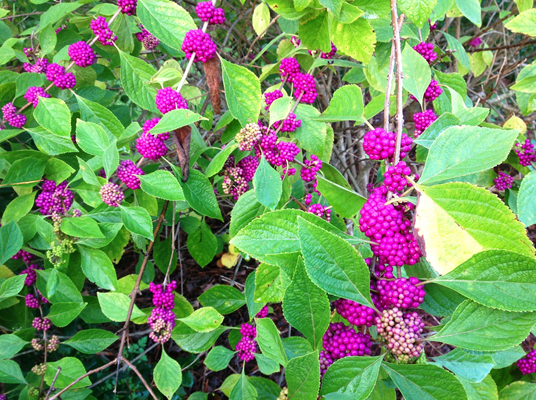 American beautyberry produces berries in fall and is a great native shrub for attracting birds to the landscape. (Photo by Allen Owings) 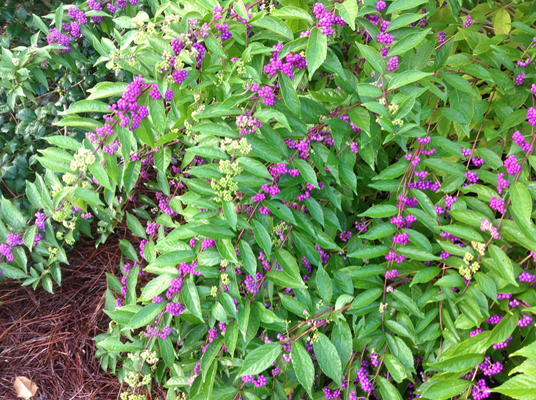 HAMMOND, La. – American beautyberry is a great Louisiana native shrub that deserves increased use. Plants have abundant fruit production in the fall, and with their wildlife benefit, they fit well into a woodland garden setting.

American beautyberry is putting on a great display in Louisiana now. The common beautyberry that most of us know produces clusters of dark purple berries although the white and pink flower forms also may be available.

You may see American beautyberry shrubs on the edges of woodland areas. They are common in several areas of the state, and many home gardeners and hunters want to know what it is when they see it this time of year.

These plants are deciduous but have three nice seasons of interest.

In spring, the plants have small, pink flowers in the leaf axils of paired leaves. The flowers are usually inconspicuous unless you really pay attention to your plants every week.

In summer, the foliage is rich green and provides a nice background hedge for flowering perennials and other shrubs.

In fall, beautyberry provides a real show. Bright berries are shiny and purple and appear in clusters at the leaf nodes all along the arching stems. The purple berries appear to have a metallic quality when sunlight reflects off them. Sometimes the berries persist well into winter, but many times they are consumed by birds and wildlife.

Alba is a white-berried selection of American beautyberry. Its berries are shiny, white and stand out in shady garden areas of the landscape. Welch’s Pink is a variety with lustrous, pink-blush berries. Plants with white and pink berries produce slightly fewer berries than the purple forms.

Duet and Summer Storm are variegated forms of beautyberry. Duet has smaller foliage with green leaves and variable yellow margins on plants that produce very small white berries. Summer Storm has larger leaves with white in the foliage. Variegation in both selections is reliably stable.

American beautyberry grows 6-8 feet tall with an equal spread. The plant is winter-hardy statewide. Some terminal stem dieback may occur in the coldest winters, but pruning out dead wood when new growth commences in spring will solve that problem. It is a good practice to prune plants a little during late winter to early spring to control plant size and direct growth.

Beautyberry has a loose and open habit. One plant can be attractive, but a grouping of three to five creates a full cluster. The plants cross-pollinate to ensure the fullest fruit production. Beautyberry tolerates dry soil conditions and partial shade, but the healthiest plants and best fruit production happen in full sun. Be sure to maintain consistent soil moisture for best performance.

The Hammond Research Station has varieties of the American beautyberry with purple, pink and white berries, as well as variegated varieties and introduced species, such as the Japanese and Mexican forms of this popular American native. The AgCenter is considering breeding and propagating additional selections.