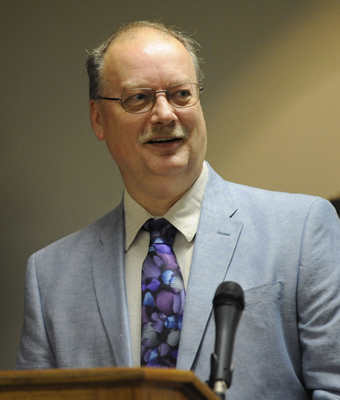 Bill Richardson, LSU vice president for agriculture and dean of the College of Agriculture, speaks at Global Agriculture Hour on Sept. 9. He said having a global mindset is important in agriculture today. Photo by Olivia McClure/LSU AgCenter

BATON ROUGE, La. – The LSU AgCenter's ties with other countries could be instrumental as LSU seeks to increase international involvement and better prepare students for a global workforce, according to LSU Executive Vice Chancellor and Provost Stuart Bell.

Bell was among the featured speakers at the Sept. 9 Global Agriculture Hour, which is a new monthly event that highlights the significance of international activities to Louisiana agriculture. It is sponsored by AgCenter International Programs.

He told attendees the university needs to grow both international student enrollment and the number of LSU students who study abroad.

Last year, about 13 percent of LSU students participated in study abroad programs — lower than many other flagship universities, where about 25 percent of students study abroad, Bell said.

Bell said faculty should develop curricula that make studying abroad more feasible because that is a critical experience for people entering job markets as highly globalized as agriculture.

The AgCenter is a leader in the LSU System for research agreements with foreign universities, Bell said, and capitalizing on those relationships could help attract international students to LSU.

Bill Richardson, LSU vice president for agriculture and dean of the College of Agriculture, said there are many international graduate students studying ag sciences at LSU, but few undergraduates. That number must be improved, he said, for LSU to compete in today's world.

Students and faculty alike should realize that many agriculture issues are also humanitarian issues that they can help with, Richardson said. For example, Liberia imports a significant amount of its food, and the ambassador from that country recently asked for the AgCenter's help to teach people to grow rice, he said.

"At universities, we've got to be cognizant that we're not in a silo by ourselves," he said. "I think that's why international programs are so critical in agriculture because of the issues we have to deal with on a worldwide basis. … We're getting many more people from other countries who are seeking to come here to do research and take that research back."

David Picha, director of AgCenter International Programs, said the AgCenter has highly-engaged faculty who participate in efforts such as food safety training in Armenia and a USAID-funded Food and Enterprise Development project in Liberia. Faculty members also mentor research fellows and visiting scholars.

Many of those visiting scholars are from Latin American universities such as Zamorano Agricultural University in Honduras, which the AgCenter has long had ties with. Leder said Latin America is one region where LSU needs to grow.

"Ag is going to continue to play a leading role in LSU's international engagement," Leder said. "Let me give you some key words — world hunger and water scarcity. … Those are big issues worldwide that you can help with."

The next Global Agriculture Hour is scheduled for 2 p.m. on Oct. 6 in 212 Efferson Hall at LSU. Speakers will include administrators from the Slovak University of Agriculture, which is working with the AgCenter and College of Agriculture to form an exchange program.