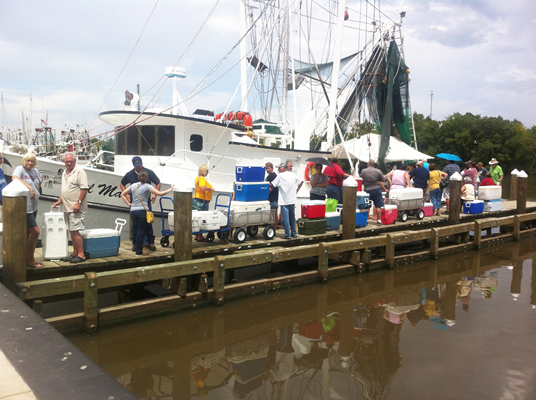 Shrimp buyers with ice chests line up to make a dockside purchase from a shrimp boat at the Delcambre Seafood and Farmer’s Market on Sept. 6. Photo by Tom Hymel/LSU AgCenter

DELCAMBRE, La. – A new boat dock, fishing pier, boat launch and farmer’s market pavilion, which was dedicated on Sept. 6, was the culmination of a project begun after hurricanes Ike and Rita devastated this coastal town.

The dedication was held during the first Seafood and Farmer’s Market of the shrimp season, and attendance was estimated at more than 4,000 people.

The $4 million project, named the Bayou Carlin Cove, was the result of local officials working with the LSU AgCenter and Louisiana Sea Grant.

The new boat launch can accommodate four boats at a time with ample parking space to replace a small boat ramp with no parking. The pavilion’s 7,500 square feet of covered area will be the new location for the seafood and farmer’s market. In addition, boats can dock at the pavilion allowing the public access fresh seafood. During Saturday’s market, four shrimp boats sold all of their catch in just a few hours.

A fishing pier gives the public a place to fish without a boat.

The project was funded with a $3.4 million federal grant from the Louisiana Office of Community Development and $600,000 from the Twin Parish Port District.

Hymel said the 14-acre site also has room for additional facilities, including an RV park and a boat storage warehouse.

A $1 million grant has been obtained to help a local business build a badly needed grocery in the town, Hymel said.

“This is a success story of the university interacting with the community,” Hymel said. “This is the result of extension developing a long-term relationship with the Delcambre community.”

The LSU Landscape Architecture Department also got involved in the project, he said. The University of Louisiana at Lafayette conducted a community design workshop, and ULL business students helped draft a seafood marketing program.

“It’s a real model on how things can happen when the resources of the university work with local officials,” Hymel said.

Wendell Verret, Twin Parish Port District director, said the process started during a conversation between Hymel and port commissioners, eventually resulting in the successful grant application. Hymel also took the project to Louisiana Sea Grant, which led to a business plan and even more grants.

He said Hymel also got the Delcambre Direct project started in 2010 that allows consumers to contact shrimpers and fishers to buy seafood from a boat once it gets to the dock. “It was a tremendous success,” Verret said.

He said several people and agencies were involved in the entire process. “It’s hard to delineate each item they helped us with. It’s almost a partnership without distinction.”

Verret said the completed project has elevated the profile of Delcambre and attracted many people who had never been to the town.

“It’s bringing in recreational and commercial boaters who are launching here,” he said. “It’s above our expectations.”

The Delcambre Seafood and Farmer's Market will be held again on Oct. 4, Nov. 1 and Dec. 6.