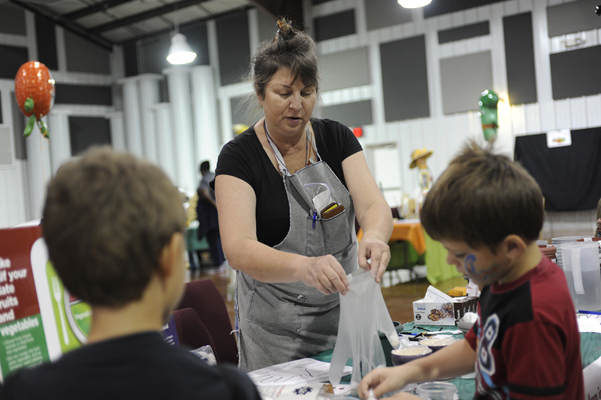 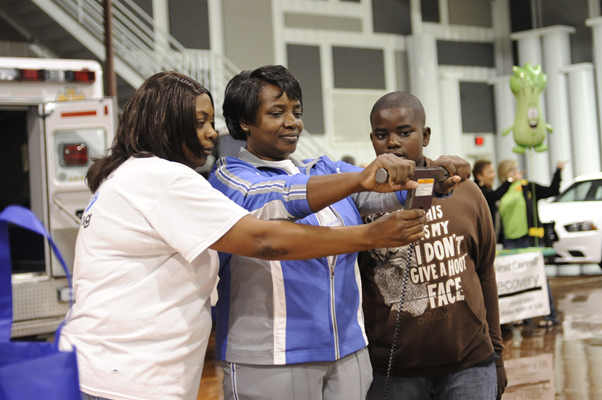 The Family Fall Fest on Oct. 25 in Oak Grove featured several booths demonstrating how to live a healthier life, including this one, where participants could measure their body fat level. Photo by Olivia McClure/LSU AgCenter 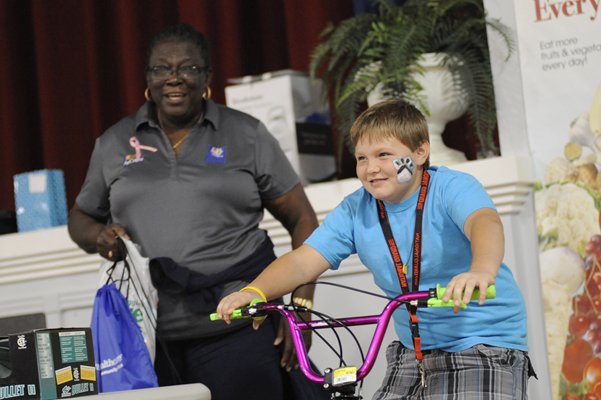 Josh Blakely, 10, of Goodwill, tries out the new bicycle he won at the Family Fall Fest as LSU AgCenter associate vice chancellor Gina Eubanks looks on. The fest took place on Oct. 25 in Oak Grove. Photo by Olivia McClure/LSU AgCenter 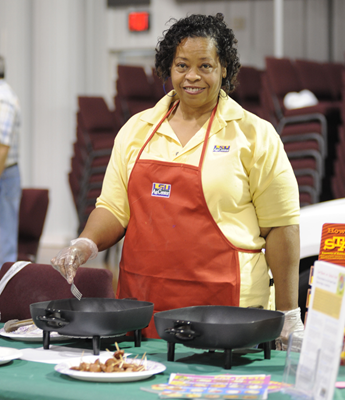 Healthy cooking demonstrations were one of the many exhibits at the Family Fall Fest on Oct. 25 in Oak Grove. Fannie Coleman, an AgCenter nutrition educator in Richland Parish, was one of the featured cooks. The fest is part of an LSU AgCenter effort to improve health in West Carroll Parish. Photo by Olivia McClure/LSU AgCenter

OAK GROVE, La. – West Carroll Parish is made up of quiet little Southern towns — the kinds that cannot be located on maps, that exist unknown to the outside world in a region where change occurs almost as slowly as the pace of life. These are places that seem charming to some and backwards to others.

These are places where diabetes and hypertension are nearly as common as the traditional foods that locals “fix” for social gatherings. Cuisine is not derived from cookbooks, but from recipes passed down family trees and memorized like words to a song.

“Some people say ‘whenever there’s an event, I make peanut butter cake’ or ‘I make chicken and dumplings,’” said LSU AgCenter agent Monica Stewart. “It’s just what people do here. It’s tradition. When people get together, they serve fish — usually caught in the surrounding area, then fried.”

This is the Mississippi Delta region, where food-centric old-fashionedness barricades improvement of the region’s staggering health statistics. About half of West Carroll Parish’s 11,600 residents are obese and have high blood pressure, according to a survey conducted by the Pennington Biomedical Research Center.

On Oct. 25, parish residents came to the Thomas Jason Lingo Community Center for an event that did not involve a covered dish meal, but instead started with a one-mile fun run. Inside the community center, volunteers staffed rows of exhibits on leading a healthier, safer lifestyle.

The crowd of attendees at the Family Fall Fest was a fulfilling sight for Stewart, who coordinates the Healthy Communities program, which launched at the fest last year. The joint endeavor of the LSU AgCenter, Southern University Agricultural Center and Pennington Biomedical Research Center strives to expand access to and awareness of healthy foods and physical activity opportunities.

Pennington recently conducted health screenings at the parish AgCenter extension office. Stewart said some participants were surprised to learn they had ailments like high blood pressure or diabetes. As a result, many have realized they must change their ways.

“They need to learn healthy,” Christina Dyess, of Darnell, said of her three children whom she brought to the fair. “I want them to be healthy — not to be overweight, not to sit around with a bag of chips.”

Terri Crawford, AgCenter northeast regional nutrition agent, said “having a healthy West Carroll Parish will take years” because it will mean breaking the mold of how things have always been.

One of the biggest hurdles is the Delta region’s history of poverty. Crawford said there is a gym in Oak Grove, the parish seat, but many people cannot afford the membership or gas money to drive into town.

Stewart said about 85 percent of people nationwide have access to recreational facilities. In West Carroll Parish, that percentage is about 30. Combined with the slow pace of life typical of north Louisiana, the lack of things to do is harming people’s health, she said.

Access to fresh, whole fruits and vegetables is also low, which is ironic given northeastern Louisiana’s vibrant agriculture industry. Crawford said the AgCenter has been helping establish school and community gardens to supplement what little produce is available at convenience stores in the tiny outlying communities that surround Oak Grove.

Ten-year-old Josh Blakely of Goodwill, who won a bicycle in a drawing for participating in the early-morning run, said the event reinforced something his grandmother tells him all the time.

“Eating vegetables is important because it gives you nutrients,” Blakely said.

But here, a healthier lifestyle is not as simple as eating more vegetables.

“Even when locals do have healthier food, they often choose cooking methods that make it unhealthy,” Stewart said. “It’s simply a mindset, as well as tradition, with limited forethought given about the effect on the body.”

Stewart believes motivation will be the key to breaking old habits. Anything from a desire for longevity to being able to play with one’s children can encourage people, she said.

“Losing people can motivate behavior change — like seeing something happen to someone and realizing that you don’t want the same thing to happen to yourself,” Stewart said.

“The focus of the Healthy Communities initiative is to get the community involved and excited,” Eubanks said. “People have to gain the knowledge and then learn how to use it. That’s the hard part because it takes time.”

But someday, organizers hope, things will change. Stewart said exposure to new behaviors is the first step toward change, and the Healthy Communities initiative is helping spark it.