Devin Whipp, an LSU AgCenter Dairy Store student worker majoring in animal, dairy and poultry sciences, moves a full box of ice cream out of the way as a machine fills another box. Photo by Olivia McClure/LSU AgCenter 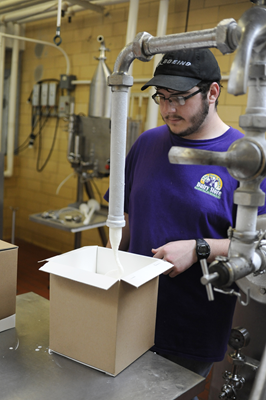 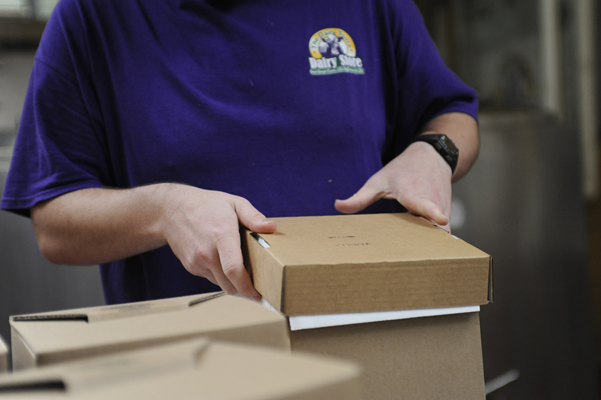 The machine that fills small cups of ice cream must be taken apart and cleaned piece by piece to ensure food safety. Photo by Olivia McClure/LSU AgCenter

The LSU AgCenter Dairy Store serves a wide variety of flavors of ice cream that is made on LSU’s campus using milk from AgCenter-owned cows. Photo by Olivia McClure/LSU AgCenter

BATON ROUGE, La. – There are probably few places in the world where purple and gold ice cream is a perfectly normal thing. LSU, of course, is one of them.

Tiger Bite, which is made of golden vanilla ice cream and blueberries, is just one of about 30 flavors of ice cream made by students at the LSU AgCenter Dairy Store on the LSU campus. They use milk from cows that live less than two hours away at the AgCenter’s Southeast Research Station in Franklinton, La.

“It’s just cool,” said Chuck Boeneke, dairy science professor and manager of the Dairy Store. “You know where the milk comes from.”

The Dairy Store is somewhat of an anomaly among Louisiana dairy operations. Most of the South is a fluid market, meaning most milk produced in the region is bottled for drinking.

Making ice cream and other dairy products with local milk is special, Boeneke said, because Louisiana is a milk-deficit state — residents consume more than is produced. Most milk available in grocery stores comes from New Mexico and Arizona, he said.

“There are a lot of practical applications of that experience,” Boeneke said. “It makes their degree more valuable when they’re getting jobs. These students are in demand in the dairy industry in other states, but they go into all kinds of areas.”

Because of their science background from LSU, some students go on to medical school, and others take research and development jobs with companies like Kroger, Unilever and Mead Johnson. People in those kinds of jobs develop new flavors and products to satisfy consumer preferences, Boeneke said.

“It’s not a limited area,” he said. “There is so much you can do with a dairy science degree.”

For now, though, Dairy Store student workers are keeping busy. Boeneke said the store has extended its hours and tripled production in the past year to keep up with growing demand. The Dairy Store is open from 8:30 a.m. to 7 p.m. on weekdays.

The ice cream is made every Friday, 400 gallons at a time. Milk is driven in from the Southeast Research Station, mixed with cream from Brown’s Dairy and other ingredients, then homogenized, pasteurized and flavored. After that, student workers box it and let it freeze.

The skills that students gain by working at the Dairy Store extend far beyond knowing how ice cream is made, Boeneke said. They learn about various aspects of food safety, from health inspections to checking for antibiotics to keeping everything stored at the right temperature.

Food safety is a complex issue, but hands-on experience can make it easier for students to grasp. For example, the ice cream undergoes about 10 to 12 safety tests, and the cup-filling machine must be taken apart and cleaned piece by piece after each use, Boeneke said.

The Dairy Store is also a way for students and customers alike to connect to LSU’s agricultural history. There has been an LSU creamery since 1905, when it was located on the former downtown Baton Rouge campus.

The creamery moved to the current campus in 1925 and was first housed in the basement of Coates Hall. It moved in 1929 to what is now the Nuclear Science Building, and again in 1956 when the Dairy Science Building was constructed. The Dairy Store opened in 1972.