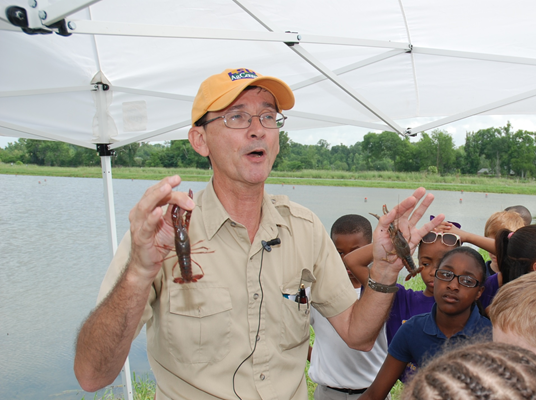 BATON ROUGE, La. – When fall weather is dry, and winter is as cold and as long as it was this year, the combination spells problems for the crawfish industry.

“When you get behind, it’s really hard to catch up,” Romaire said. “We lost a month of growing this season due to weather.”

Because crawfish growth is temperature-dependent, those months from November through February are important to size and availability.

“It was cold longer this year than we usually expect,” Romaire said.

LSU AgCenter aquaculture researcher Ray McClain, who studies crawfish at the Rice Research Station near Crowley, said this has definitely been an atypical year for pond-raised crawfish.

“Some crawfish are still being harvested, and as is typical, harvesting will continue in those ponds that are catching as long as it is profitable,” McClain said.

The recent dry spell has caused some crawfish farmers to end their seasons, while others are looking toward the Atchafalaya Basin for the wild crop that comes in this time of the year.

“It’s possible that a period of cool, rainy weather could prolong the season some,” McClain said. But hot, dry weather spells the end of this year’s pond crop.

“It’s a matter of economics,” Lutz said. “If the farmer can justify going out to run the traps, and he can get a good enough price, he will get crawfish.”

When the weather cooperates in the fall, it is possible to find boiled crawfish as early as Thanksgiving, which was unheard of just 10 years ago, Romaire said.

“During the past decade, people have been demanding and getting crawfish around Thanksgiving, but it hasn’t always been so,” Romaire said. “You didn’t expect to get them until around March.

Normally, the crawfish season would be down to the last few weeks by now, Lutz said. “But with the season starting off slower and the wild catch just now really coming in, crawfish could be available for several more weeks before they start burrowing for the summer.”

One of the problems encountered by crawfish farmers when the season starts slow is many are actually rice farmers first and crawfish farmers second, Romaire said. “When it’s time to plant rice, they can’t wait.”

“These crawfish have been doing this for hundreds of millions of years. When the days start to get longer and the water starts to get warmer, they know that summer is coming soon, so they’ve got to go find a place to spend the summer, and they’ll start burrowing down,” Lutz said.

The researchers agree that the wild crawfish coming in now are about the same quality as pond-raised were in March.