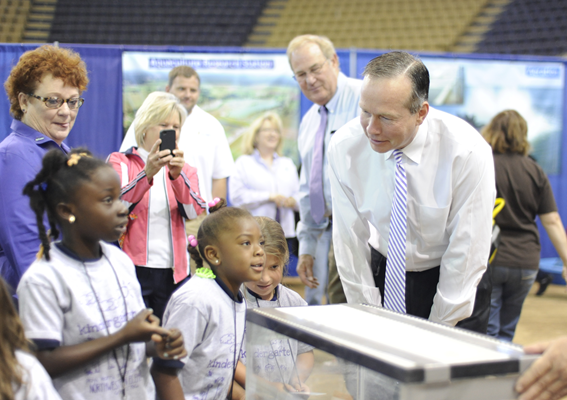 LSU President F. King Alexander, right, and a group of children look at fish at AgMagic as LSU Vice President for Agriculture Bill Richardson looks on. (Photo by Olivia McClure) 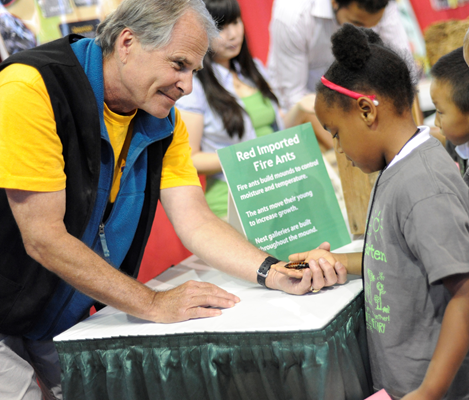 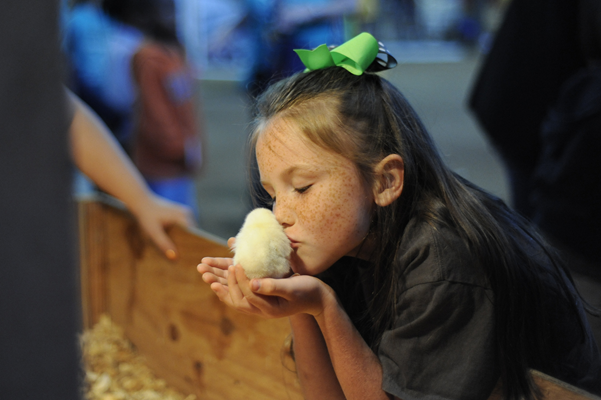 A girl kisses a baby chick at AgMagic. (Photo by Olivia McClure)

BATON ROUGE, La. – It's not often that sheep, cows and chickens can be found in the middle of a busy city. But at the LSU AgCenter's annual AgMagic, those animals and much more are within reach of thousands of kids, offering a journey through agriculture and the ways it touches people's lives.

For one week, kids converge on Parker Coliseum on the LSU campus for an interactive learning experience that is not only fun but also helps them understand where their food and fiber come from.

"Agriculture affects everyone, so it is important to educate the next generation about why it matters," said Frankie Gould, AgCenter communications director. "Many children don't know that crops like cotton are used in everyday items from their clothes to dollar bills, or that the cereal they had for breakfast started as wheat growing on a farm."

The AgCenter provides teachers with information packets for lessons that can be taught after visiting AgMagic, helping create lasting impact. In addition to live farm animals, highlights of AgMagic include Smokey Bear, displays of flowers and row crops, insect rubbings and a grocery stand sponsored by Rouses Supermarkets.

AgMagic is unique because it illustrates the value of agriculture in ways that appeal to kids, Gould said. For example, most youngsters like getting their hands dirty, so one activity is digging for sweet potatoes, which made up an $85.6 million industry in Louisiana in 2013.

Agriculture is essential to life, but it is often too abstract and complex for city kids to grasp, said Jane Brown, a first-grade teacher at St. Thomas More Catholic School in Baton Rouge. It is important to teach children "if we don't grow, we don't eat," she said, and hands-on experiences like AgMagic are the best ways to do that.

"Today's high-tech world excludes our children from these experiences," Brown said. "They're growing their plants and raising their animals in video games, not going outside in the backyard to do it. And opportunities to visit farms are extremely limited."

One of Brown's students, 7-year-old Carter Gibson, said he liked holding the chicks most. He said he realized growing plants is important because they are where food comes from, and that insects like those on display can hurt crops.

Classmate Madison Calandro, 7, also enjoyed holding a chick because hers fell asleep in her hand. Calandro said AgMagic introduced her to many animals and plants she had never seen before, which helped her understand just how much people depend on agriculture.

"Bad things would happen without plants and animals," she said.

AgMagic is open to public from 10 a.m. to 3 p.m. on May 3 and 4. The AgCenter is also launching AgMagic On The River this year, which will take place at Docville Farms in Violet, Louisiana, near New Orleans on May 14-17.

Olivia McClure is a student in AgCenter Communications