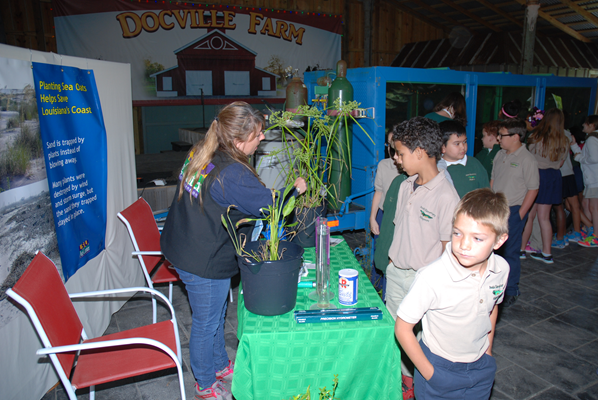 Students from Arabie Elementary School learn about the importance of plants in decreasing coastal erosion during AgMagic on the River at Docville Farm in Violet, Louisiana. More than 1,400 children visited the farm on the first two days of the event, which welcomed third- to fifth- grade students on May 14-16, then opened to the public on May 17. (Photo by Johnny Morgan) 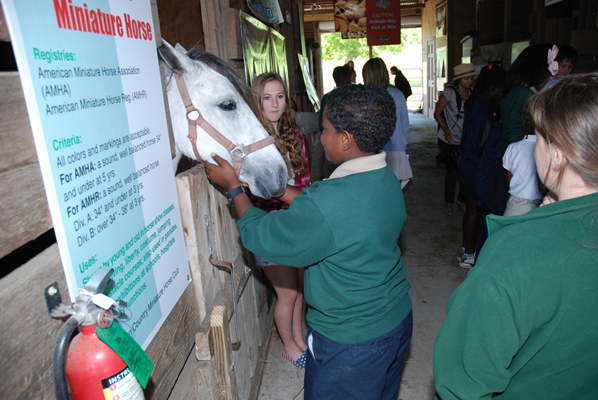 These students were able to touch a horse for the first time ever at AgMagic on the River ate Docville Farm in Violet, Louisiana. The event welcomed third- to fifth- grade students on May 14-16, then was open to the public on May 17. (Photo by Johnny Morgan)

NEW ORLEANS – For the first time, the LSU AgCenter brought AgMagic to the New Orleans area to help children learn about the importance of agriculture.

The interactive, visually stimulating experience was held at Docville Farm in Violet on May 14-17.

AgMagic is designed to show urban and suburban children and adults that what we eat, what we wear and where we live are all a part of agriculture and natural resources, LSU AgCenter Orleans Parish 4-H coordinator Beth Gambel said.

More than 1,400 children visited the farm on the first two days of the event, which welcomed third- to fifth- grade students on May 14-16, then opened to the public on May 17.

AgMagic is an informative experience for the students because it features a variety of interactive exhibits of plants and crops, live farm animals, wildlife, bugs, fish, forests and food.

“This is AgMagic South,” said LSU AgCenter agent Wayne Burgess of St. Bernard Parish. “This event has been held annually in Baton Rouge for more than 10 years, and now we’re bringing it here as an annual event.”

Talia Fruchtnicht, a teacher at Arabie Elementary School, said she is excited as well as her fourth- grade students to have the opportunity to see the live animals and to learn something new about agriculture.

“This is very timely because we are studying nutrition right now in their science class, so I’m hoping they can relate a lot of the things that we are learning here to what we’re studying in class,” Fruchtnicht said. “We talk about the animals and what’s healthy in the food pyramid, so hopefully they can correlate that with what they are seeing here today.”

Fruchtnicht said her students understand the basics, like milk comes from a cow, but they don’t realize some things, like their shampoo and napkins can be made from trees.

Gambel said she had been familiar with AgMagic in Baton Rouge, and a couple of years ago decided it was time to bring it to New Orleans.

“I brought my grandchildren to AgMagic in Baton Rouge about two years ago. When we got back they were so fired up that it fired me up, and I said, you know we need to do something like that in the urban area down here,” Gambel said.

From there, she and her coworkers began looking for a location, and Docville Farm came up. Then they began moving to make it a reality.

“We contacted the Meraux Foundation. We came out, and we fell in love with it. And the foundation fell in love with our idea also,” Gambel said. “They had the facility, and we had the programming. We just started working, and now we’ve agreed to make this an annual event.”

The activities include much hands-on involvement. The children can dig for sweet potatoes and worms. They learn the growth stages of plants, visit a 1,500-gallon aquarium filled with Louisiana specimens, visit a working crawfish pond and learn about coastal restoration, she said.

Chris Haines, a board member of the Meraux Foundation, which operates the farm, said AgMagic is the perfect event to fulfill the wishes of their aunt Arlene Meraux, who created the foundation.

“Docville Farm has been in existence since the 1720s, and at one time was part of the Story Plantation. But the Meraux family bought it in 1925,” Haines said. “It was kind of a hobby farm with cattle, pecans and citrus.”

Haines said his aunt wanted the farm to be a cultural and educational center for St. Bernard Parish.

In addition to AgMagic, the farm also has been host to twilight concerts, ‘Blues in Da Parish Festival’ and the Christmas Tour of Homes, Haines said.