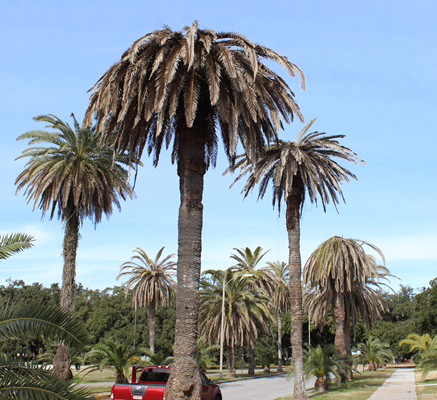 “Until recently, the disease has only been found in Florida and Texas,” Singh said.

The disease got its name from Texas, where it was first identified on Phoenix canarensis or Canary Island date palm in 2001.

It is a fatal disease that rapidly causes decline and kills the infected palms, he said.

“The pathogen colonizes in the phloem tissue from where it spreads systemically to new plant parts,” Loyd said.

Scientists suspect the disease is spread by sap-feeding insects with piercing-sucking mouthparts, such as plant hoppers, psyllids or tree hoppers, Loyd said. However, the exact species of the insect vector is unknown.

Symptoms of the disease start with discoloration of tips of the oldest leaves. Infected leaves then turn reddish brown to dark brown and eventually die.

Palms infected with this disease exhibit a large proportion of discolored leaves in the lower region of the canopy, Singh said. The spear leaf dies and turns tan colored after approximately one-third of the lower leaves have discolored.

“Infection on mature palms leads to premature drop of majority of fruits in a few days,” Singh said. “Root rot may also occur in infected palms.”

“Symptomatic palms with dead spear leaves must be removed immediately, because they may serve as a source of the pathogen for the insect vectors to transmit the disease to healthy, susceptible palms,” he said.

Successful disease management in landscape where the disease is prevalent can be achieved by preventative treatment of healthy, susceptible palms with antibiotic oxytetracycline hydrochloride, Singh said.

The antibiotic should be administered as a trunk injection every three to four months, he said. Accurate identification of this disease in the field is required for effective disease management.

Other diseases and disorders of palms may produce similar symptoms, which can make it hard to identify the disease based solely on symptoms.

“Samples from suspected palms can be submitted to the LSU AgCenter Plant Diagnostic Center for positive identification. But before anyone collects any samples, they should contact us,” Singh said.

More information about Texas Phoenix palm decline can be obtained by calling Singh at 225-578-4562 or email at rsingh@agcenter.lsu.edu.