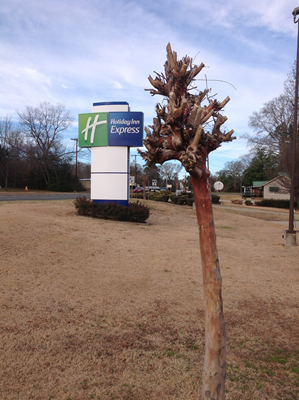 This is one of the most extreme examples of ‘crape murder’ in the landscape. (Photo by Allen Owings) 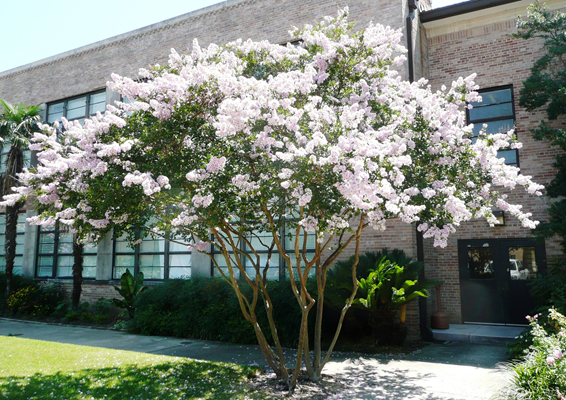 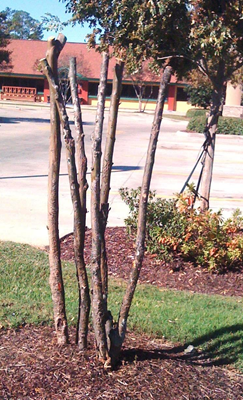 Topping a crape myrtle is not a recommended pruning practice. (Photo by Allen Owings)

HAMMOND, La. – We are midwinter in Louisiana, and this is the time when people think about pruning crape myrtles. Unfortunately, these are one of the most abused trees in Louisiana’s residential and commercial landscapes.

Crape myrtles need only occasional pruning, in most cases, to obtain the desired landscape effect. But many times these plants are butchered for no good reason.

An unfortunate trend in crape myrtle pruning is to "lop off the tops," which results in a crew-cut appearance. The lush growth that occurs at these cut sites appears vigorous but is actually structurally weak and is more susceptible to fungus diseases such as powdery mildew. Worse yet, when pruning is done improperly over several seasons, unsightly large, swollen knobs form at the point where pruning is done each year. Some folks refer to this pruning method for crape myrtles as “crape murder.”

While crape murder does not actually kill a tree, why are these most popular, small, flowering trees pruned this way?

The method of cutting back the main branches of a tree to the same spot every year is called pollarding. This pruning method is used on some types of trees in certain situations and tends to be more common in Europe than America.

A gardener should understand, however, that the life of a crape myrtle is shortened and the natural beauty of the tree is destroyed by this pruning technique. If gardeners understand this and still decide pollarding creates the appearance they desire for their trees, well, that’s their choice.

We often encounter gardeners who think they are supposed to prune their crape myrtles that way. Nothing could be further from the truth. For the overwhelming majority of us, enhancing the natural shape of our crape myrtles is most appropriate.

Some gardeners have been told that crape myrtles need to be pruned that way to bloom well. This is not accurate. The flower clusters may be larger on pollarded trees, but the added weight on the ends of long branches causes them to bend over awkwardly, especially after rain. And because the tree is smaller, it actually produces fewer flower clusters.

A wide selection of crape myrtle varieties is available today. Some grow tall and upright like a vase, while others are shorter and spreading, having more of an umbrella or cascading affect. You cannot make an upright-growing crape myrtle grow into other shapes by cutting it back. The new growth will simply grow upright again. So if you want a crape myrtle that will mature in the shape you desire, make sure you choose one that naturally grows that way.

Many gardeners cut back crape myrtles that are too large for the location where they were planted. This is commonly seen in trees planted close to a house. Instead of choosing a smaller-growing variety that would be appropriate, a larger type was planted, and then it begins to grow into the gutter and roof.

To salvage the situation, people often begin cutting their trees back. To be effective, this has to be done every year. And again, it ruins the natural beauty of the tree. This is added work that could have been avoided by planting a smaller-growing crape myrtle.

To prune a crape myrtle properly, first decide if it needs to be pruned at all. As with any pruning project, you must have a specific purpose in mind before you begin. If you can’t come up with a good reason to prune your tree, leave it alone. If you do see something that calls for pruning, study the tree carefully and determine what needs to be pruned to accomplish the specific purpose you’ve identified.

Examples of appropriate reasons for pruning include eliminating crossed and rubbing branches, removing low branches, removing weak, thin branches from the inner part of the tree, trimming off old seed pods, creating a shapelier tree and keeping suckers removed from the base of the trunk.

Avoid cutting back or shortening branches larger than your finger, although cutting larger branches back to a side branch or to the trunk, when needed, is fine.

With its smooth, muscular trunks, peeling bark, filigree of leafless branches in the winter and exceptionally long blooming season in summer, the crape myrtle is rightfully popular here. Make sure you keep yours looking their best.