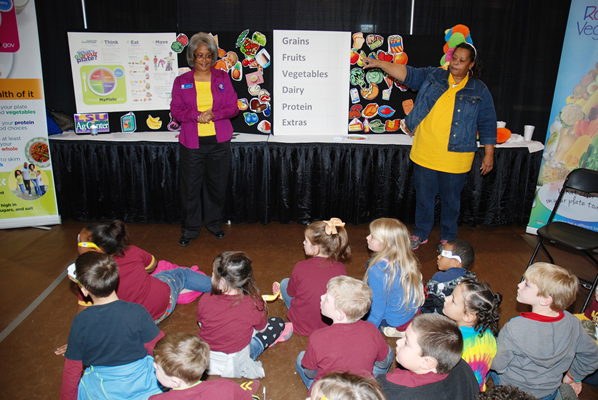 Sarah Sims, Southern University family and consumer science agent, and LSU AgCenter nutrition educator Fannie Coleman teach first-graders the importance of proper nutrition at AgAlley, which is held each year as part of AgExpo in West Monroe. This year the event was held on Jan. 15-18. (Photo by Johnny Morgan) 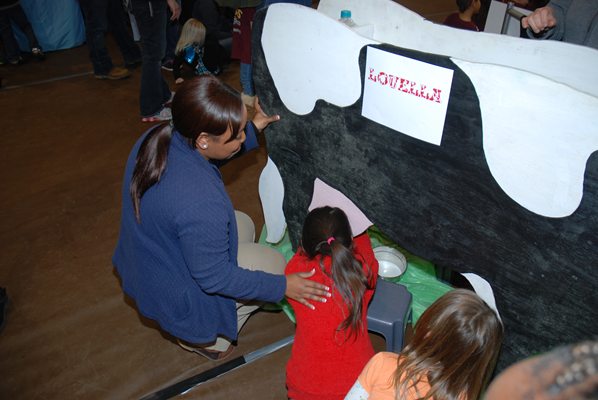 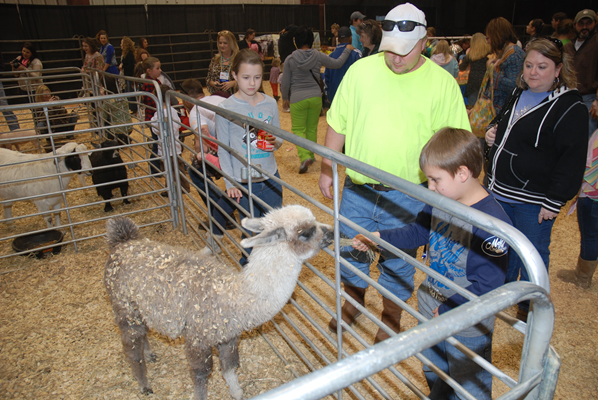 Feeding a llama was just one of the fun things for children and adults to do in AgAlley during AgExpo in West Monroe. (Photo by Johnny Morgan)

LSU AgCenter agent Richard Letlow from Ouachita Parish said AgAlley allows the AgCenter to provide nutrition information to first-grade students and to give fourth-grade students a general knowledge of crops grown in the state.

“One of the main missions of the AgCenter has been to educate the public about agriculture and its products,” Letlow said.

Each year, AgCenter agents set up an area in the Ike Hamilton Expo Center in West Monroe featuring the different crops grown in the area along with a mini-farm with animals, said LSU AgCenter agent Carol Pinnell-Alison of Franklin Parish.

“The animals are always a big hit because the youngsters get a chance to touch them and just get close to animals that they may have never seen in real life,” Alison said.

This year more than 1,500 students camefrom Ouachita, Morehouse, Union, Richland, Franklin and Caldwell parishes, according to Alison and Sandy Lyons, executive director of the North Louisiana Agri-Business Council, the coordinator of AgExpo.

“We have been doing AgAlley for 12 years, but the AgExpo has been an annual event here in Ouachita Parish for probably about 40 years,” Letlow said.

LSU AgCenter 4-H agent Markaye Russell from Ouachita Parish said AgAlley is a two-day event for the first- and fourth-grade students, then the final two days are open to the public.

“We start sending out letters right after Thanksgiving, and we start promoting the event to the schools at that time,” Russell said.

“The youngsters get really excited about the mini-farm,” Alison said. “And this year it’s better because we have more animals.”

The mini-farm featured a baby llama this year, along with a donkey, a miniature horse, geese and ducks, she said. These were in addition to cows, chicks and a turkey.

“I’m always surprised at the number of children and adults who come through and don’t really know what the raw commodity or product looks like,” Alison said. “They know what it looks like in the store, but they sometimes see raw corn and ‘ask is it real?’”

Lawrence said the first-graders tried their hand at milking Louella, the model cow that’s used to show where milk comes from before it gets to the grocery store.

Seay said the goal is to start these students off at a young age understanding the importance of nutrition, so when they are older it will be second nature.