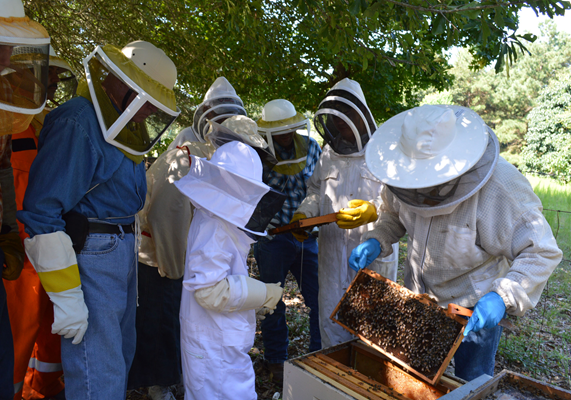 Participants of the LSU AgCenter’s basic beekeeper training class look at frames of bees. The class visited Richard Hebert’s bee yard in DeRidder to get experience working with bees. Photo by Tobie Blanchard 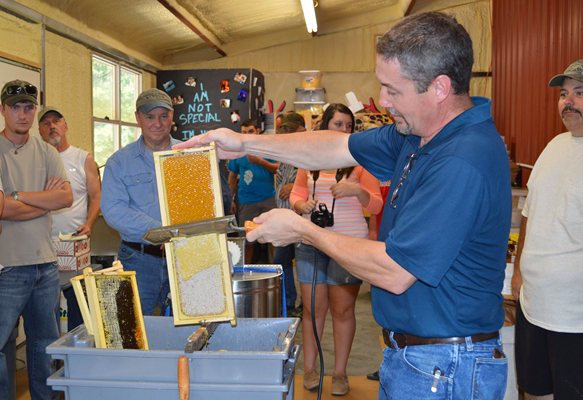 Richard Hebert demonstrates how to remove the wax cap from a frame to extract the honey. Photo by Tobie Blanchard 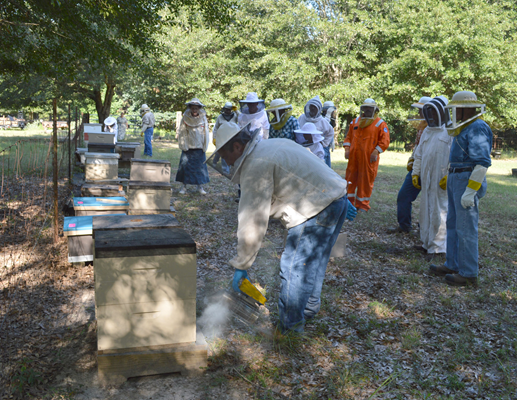 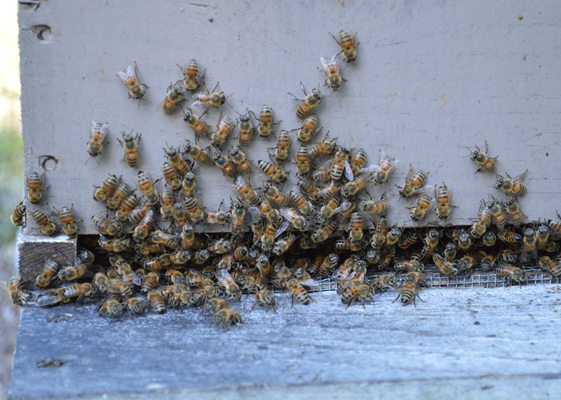 A group of bees at Richard Hebert’s bee yard move in and out of a hive box. Hebert keeps about 70 hives of bees, some on his property and others in orchards near his home. Photo by Tobie Blanchard 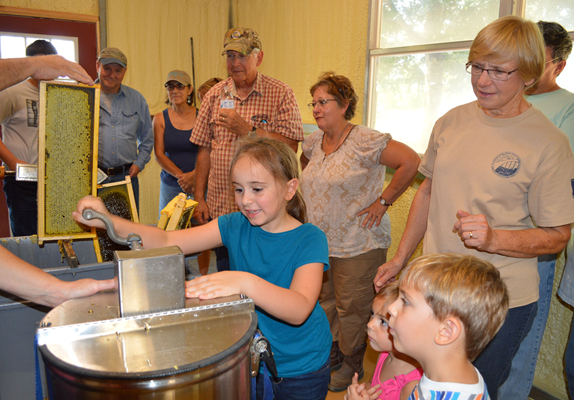 Gabby Palmer, at right, turns the handle on the honey extractor while her grandmother Mary Waguespack, at right, of Prairie Ronde, looks on. Photo by Tobie Blanchard

The group is part of the first basic beekeeper training class offered by the LSU AgCenter. Keith Hawkins, the Beauregard Parish county agent, organized the class, which met in July and August.

“We started with the different varieties of bees and their biology,” Hawkins said. “We discussed configuration of the hives, the accessories that you need and bee products.”

The participants also learned how to get bees, care for them during the off-season and about hive pests such as hive beetles.

Hebert is president of the Southwest Louisiana Beekeepers Association and keeps about 70 hives of bees, some on his property and others in orchards. He said he started keeping bees to pollinate his clover, but says he now has lots of bees but little clover.

He knew about master beekeeper training programs in other states and wanted to start something similar in Louisiana. He hosted visits to his bee yard because he thought it was important for potential beekeepers to get hands-on training with bees.

“You can look at pictures all day long and not really get a grasp of what it is to actually hold a frame of bees, to open a hive and to hear the buzz and listen to the bees talk,” Hebert said.

Mary Waguespack was at the bee yard visit with her three grandchildren. She said she has always been interested in bees and allowed beekeepers to put bees on her property in Prairie Ronde. But after the bees were removed, she decided to start keeping her own bees.

Waguespack said she took the course to become a better beekeeper even though she already has four hives. She got her first harvest of honey earlier this month.

“We did harvest nine frames of honey, and we have two and half gallons of honey, which was 35 pounds, and it was real exciting to have your own honey,” Waguespack said.

She said her grandchildren are interested in bees, and she will probably buy them a child’s beekeeper suit so they can check the hives with her.

As part of the training, Hebert demonstrated how to remove the wax cap from the frames and extract the honey.

Lisa Ann Clark, of DeRidder, doesn’t have bees yet, but she plans to have her first hive by spring. She said she was interested in keeping bees for one reason – “I love the honey,” she said.

She said she will buy two gallons of honey a year and, “it’s not enough.”

“But if I do have questions, I know that the beekeeper organization here is available and willing to help,” she said.

One hazard of beekeeping is getting stung, and Clark was stung while out checking the hives, but she said that did not deter her from keeping bees.

Hebert estimates he has been stung hundreds of time. He said even though it happens a lot, it doesn’t diminish the pain.

Hawkins’ plan is to have AgCenter county agents offer the basic beekeeper training in other parts of the state and eventually create a master beekeeper program modeled after the AgCenter’s Master Gardener and Master Farmer programs.