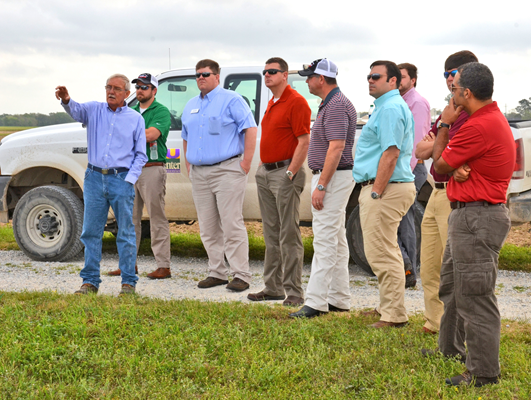 Steve Linscombe, director of the LSU AgCenter Rice Research Station, far left, tells members of the USA Rice Leadership Class about variety development at the station during an April 3 tour of the station. Photo by Bruce Schultz

“This gives us a chance to meet with the up-and-coming figures in the rice industry,” said Steve Linscombe, station director.

Linscombe told the group, which included people from Arkansas, California and Texas, as well as Louisiana, about the station’s emphasis on quality in its development of new varieties and hybrids and showed them several fields where rice variety development is underway, including hybrids.

One of the class members, Clay Schaefer, a rice farmer from Hunter, Ark., said he had heard about the station’s work for years, but it was his first visit.

“Seeing the Rice Research Station was great because I’ve heard a lot about it, and I’ve produced a lot of Louisiana rice in my 20-year career,” he said.

He said it has been interesting to see rice mills owned by corporations, unlike most of the mills in Arkansas, which are owned by cooperatives.

He said the connections he has made during the class sessions could prove valuable later, and he has learned a lot from getting to know fellow class members.

Jon Munger, farm manager for Montna Farms near Yuba City, Calif., said this is his first trip to Louisiana. “It’s been quite eye-opening, especially the crawfish grown in rice fields,” he said.

He said California has a small crawfish industry. “But it’s nowhere near this scale,” he said.

Munger said California’s irrigation water shortage has gotten some relief with recent rains and snowfall. But, he said, the class’s visit to Texas was disturbing to see the drought problems there, where rice farmers have had to cut back on rice acres or quit farming completely. “It’s very heart-breaking to see the Texas guys go through a drought like that,” he said.

The class also visited the JohnPac plant in Crowley, which makes bags for rice, and the Zaunbrecher Brothers farm at Rayne to see rice and crawfish production.

Other members of the class are A.J. Sabine with Louisiana Farm Bureau, Baton Rouge, La.; Jonathan Hobbs of Russell Marine, Metairie, La.; Derek Haigwood, of Newport, Ark.; Jeremy Jones, of England, Ark., and Will Reneau, of Beaumont, Texas. All were chosen for the class during the USA Rice Outlook Conference in St. Louis last December. The class is sponsored by John Deere, RiceTec and American Commodity Corp.