Students represent the future of agriculture in D.C. 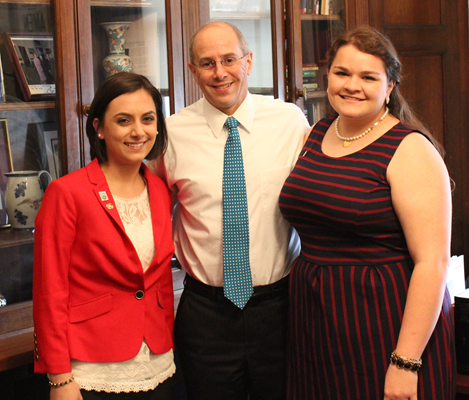 LSU seniors Brittany Doise, from Elton, and Kasie Dugas, from Broussard, visited with U.S. Congressman Charles Boustany of Louisiana’s 3rd Congressional District while on a recent trip to the Capitol as 4-H representatives for the state of Louisiana. (Photo provided)

BATON ROUGE, La. – Two LSU College of Agriculture students were among the nearly 100 college students from across the country who celebrated National Ag Day (March 25) with agriculture and political leaders in Washington, D.C.

Kasie Dugas, a senior majoring in forestry and wetland’s science from Broussard, and Brittany Doise, also a senior and majoring in ag business from Elton, represented the LSU Collegiate 4-H chapter on the trip. The event was hosted by Farm Credit, and students in attendance represented FFA, 4-H and AFA.

The two say they were chosen by LSU AgCenter 4-H youth development program leader Mark Tassin because they were former 4-H members and currently members of Les Voyageurs, which is the recruiting arm of the LSU College of Agriculture.

“This was an opportunity for us to meet with our congressional delegation and to show them that we are interested in agriculture and that we take the future of agriculture seriously,” Dugas said.

These two young ladies were excellent representatives for the College of Agriculture, said Mark Tassin, director of youth programs for the LSU AgCenter.

Tassin said this was an opportunity for two of the top agriculture students at LSU to meet with college youth throughout the United States to discuss the future of agriculture.

“With bright minds like Kasie and Brittany, I feel the future of agriculture is positive,” Tassin said. “This was an opportunity for them to have input from a Louisiana perspective.”

While on the trip, the two visited the U.S. Capitol, took a tour of the White House and met with Congressman Charles Boustany and Senator David Vitter.

“When we got there on the first day, Sunday, we got to know each other,” Doise said. “On Monday we had training sessions where USDA partners and legislative aids discussed their roles.”

Breakout sessions were part of the training, where people talked about agriculture Issues within their states.

Some states brought people from all three organizations. They were from different parts of the states and didn’t know each other, so the breakout sessions were helpful, Doise said.

Part of the training was provided by industry professionals who discussed how to talk to politicians about agriculture.

“Our role was to thank our congressional delegation,” Dugas said.

Dugas said they went on the congressional visits on Tuesday. “We got to speak with Congressman Boustany and we had a short visit with Sen. Vitter.”

“Since forestry is the No. 1 agricultural industry in the state and my major, that’s what I talked about,” Dugas said.

Doise said because her father is a rice farmer, that’s what she talked about.

Both students say 4-H has had a major impact on their lives. They plan to enroll in graduate school after graduation.