Shrimpers, crabbers learn to save money, work safer at meeting 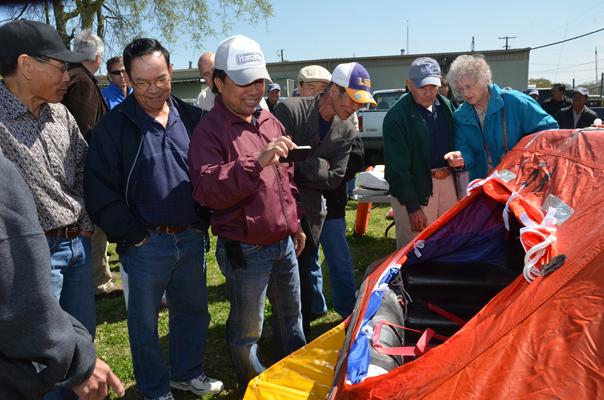 Shrimpers get a first-hand look at the deployment of an emergency life raft. The demonstration was part of a Seafood Summit held in Delcambre for shrimpers and crabbers by the LSU AgCenter and Louisiana Sea Grant. Photo by Bruce Schultz

DELCAMBRE, La. – The LSU AgCenter and Louisiana Sea Grant held a series of meetings March 25-26 for crabbers and shrimpers with experts to advise them how to save money, to work safer and to comply with state and federal regulations.

“Right now, the prices are higher than they have been in past years, but the catch is down, too,” she said.

“Overall, we have seen a decline over the past few years with drier weather,” she said. “We hope warmer water temperatures and rain will increase the crab catch this year compared to last year. Temperature and salinity play a major role in where the crabs go and how fast they grow.”

Bui, who translated many of the talks for the Vietnamese in attendance, said the participants were pleased with the presentations. “We try to incorporate a lot of things into the two days,” she said.

Rusty Gaude, AgCenter and Sea Grant fisheries agent in Jefferson Parish, said shrimpers are benefitting from higher prices that have continued to increase since last fall. He said the amount of farm-raised shrimp imported into the United States has declined because of disease.

He said inshore water temperatures are average, setting up the potential for a good year when the state season is opened sometime in May.

But prices could fall just as quickly as they increased, Gaude said. He’s advising shrimpers and processors to use their additional profits wisely. “We don’t know how long this is going to last.”

He said good prices in 2002 crashed because of a large increase of imports.

Bui said the decline in shrimp imports is good for U.S. shrimpers and not just because of a higher price for their catch. “This is an opportunity for domestic shrimp producers to showcase their product of wild shrimp,” she said.

No more than 50 pounds of shrimp should be frozen in bags that allow for rapid freezing in a brine solution, he said, adding that washing shrimp before placing them in a brine solution will keep equipment cleaner and promote quicker freezing.

He said a 23 percent brine solution at zero degrees F is needed to freeze shrimp in 20 minutes. He said adding more salt will be necessary, roughly 28 pounds of salt after freezing 1,000 pounds of shrimp.

Harry March, of the U.S. Coast Guard, said fishing boats can be inspected at dockside for free with no penalties for any shortcomings in safety equipment. He said the inspections will result in a sticker that will expedite an inspection that occurs on the water.

Dale Stevens of the National Oceanic and Atmospheric Administration said enforcement of regulations for turtle excluder devices in shrimp nets will be increased this year. He said as the result of a previous lawsuit, a compliance rate of less than 88 percent could result in the closure of an area in the gulf to shrimping.

Several programs were outlined by speakers. Donovan Burke of the Louisiana Department of Wildlife and Fisheries said fishing operations can register to be certified under the Louisiana Wild Seafood program. To qualify, the products must be from the Gulf of Mexico or state waters, landed at participating docks, and with processing and packaging in Louisiana. In addition, the products cannot be co-mingled with noncertified products, he said.

Erin Brown of the Department of Wildlife and Fisheries said grants are available to help processors, docks and fishing operations obtain refrigeration units, with a maximum amount of $30,000. She said the deadline for applying for a grant is April 7.

Bui said the two days provided participants with the chance to see safety equipment used that they could not afford to try themselves. For example, representatives of a marine safety company demonstrated deployment of a life raft, and a diving company told crabbers and shrimpers how to operate their boats safely in areas where divers are working.

In addition to the presentations, free health screenings were provided.