Scientist searches for controls for weeds in rice 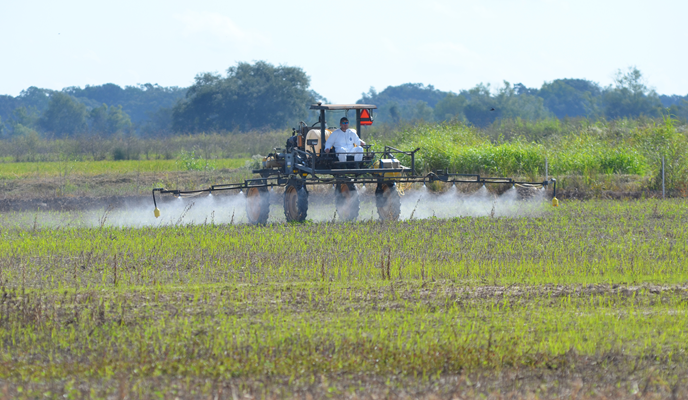 “These weedy rice plants, I believe, are more efficient than normal red rice at competing for nutrients, light and space,” Webster said.

The test included dividing a weed-infested field in three sections and planting one in soybeans and another in Clearfield rice and leaving the third fallow.

The sections of the field were treated with various herbicides, including glyphosate, Zidua, Outlook and Newpath.

“We’ll make our final counts and see how well we did in year four,” Webster said.

Research started on a new aquatic weed herbicide, benzobicyclon, from Gowan that shows good activity on ducksalad and cattail, Webster said. “It looks like it’s going to have activity on sprangletop.”

Webster said Nealley’s sprangletop is becoming more of a problem for rice farmers, so he started a greenhouse project to study what can be done to control the weed.

Webster’s work has been expanded to include north Louisiana. He said although much of his research there duplicates what he is doing in south Louisiana, he’s also been examining 16 herbicides in four tests to best determine the optimum time to apply herbicides that control broadleaf and sedge weeds.

The use of Permit for late-season or salvage control of sesbania, jointvetch and nutsedge is working well, he said, but he advises avoiding Permit Plus on those plants because it appears the herbicide tends to delay rice maturity.

Webster said the use of Command, post-emergence, plus a crop oil concentrate is showing good results on small grasses and jointvetch.

He also is evaluating the herbicide Sharpen for control of small grasses, broadleaf weeds and rice flatsedge. It has excellent activity on sesbania and jointvetch, he said.

Sharpen works well at the 1-ounce rate, but 2 ounces per acre can be very injurious to rice and in some cases reduce stands if it is applied during cool, wet conditions.

Webster said he has been working on burndown weed control chemicals, including Yukon, a mixture of Permit and dicamba.

He also is continuing a research project at the LSU AgCenter Rice Research Station South Farm to determine the distance that jointvetch and hemp sesbania weeds compete with neighboring rice plants.

Webster said checkoff money paid by farmers and allocated by the Louisiana Rice Research Board has been invaluable to his projects.

“LSU AgCenter research on the new BASF herbicide Provisia that will be used with a new herbicide-resistant rice to complement Clearfield would not have been possible without checkoff funding,” Webster said.

“Weed and herbicide research is inherently expensive and requires thousands of hours of work every year,” he added. “Without the funding, we couldn’t have accomplished what we have, and that would mean the results that benefitted farmers would either be delayed or would not have been possible.”