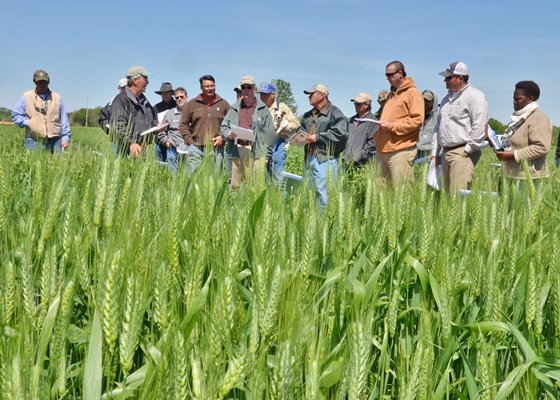 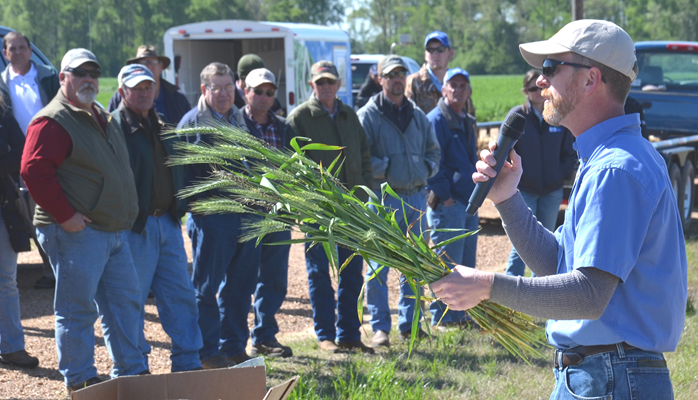 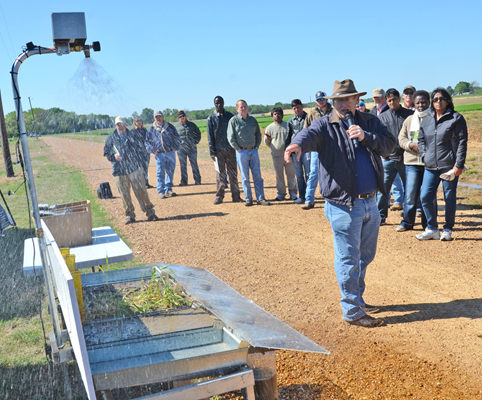 Steve Nipper of the Natural Resources Conservation Service explains details of a demonstration of a model that illustrates how different tillage methods affect rainwater penetration into soil. Nipper gave the presentation at the Oat and Wheat Field Day held at the LSU AgCenter Macon Ridge Research Station. (Photo by Bruce Schultz)

WINNSBORO, La. – Recent high winds could cause lodging problems for the state’s 175,000 acres of wheat, but otherwise the crop is doing well after coming through a cold, wet early spring, according to LSU AgCenter wheat specialist Josh Lofton.

“Overall, it’s fantastic,” he said. “I haven’t talked to a farmer who said they are disappointed with their crop.”

Lofton said wheat in south and central Louisiana is further along, making it more vulnerable to falling over, or lodging, from high winds. But he said most of the wheat in those areas is planted on flat ground, and that makes harvest easier in contrast to the raised beds more commonly used in north Louisiana.

Disease pressure is the lightest in many years, he said. Fungicides are not allowed on wheat after flowering, but disease after that stage usually has minimal effects. “Right now it’s a race between the disease and the wheat.”

But wheat prices are good, ranging from $5 to $6 a bushel, he said. Some of that is because of a cold winter and political turmoil in Ukraine as well as a hard, late-winter freeze in the Great Plains.

Cold temperatures hit the Louisiana crop also, but the effects will be minor, Lofton told more than 100 people at a wheat and oat field day at the AgCenter Macon Ridge Research Station on April 16.

Lofton said the mid-April cold snap came at a vulnerable growth stage for wheat north of Alexandria and slowed the crop’s growth. He said the late harvest will delay soybean planting on fields that are double cropped.

Of the estimated 175,000 acres planted, Lofton expects the actual harvest will be in excess of 150,000 acres. “We probably lost quite a bit of the acres because of the temperature and moisture,” he said.

He said the early-planted crop will be affected most by the overall winter and spring weather, but the recent cold front should only cause superficial damage to most fields. “For the most part, it wasn’t as bad as it could have been.”

Lofton said predicted cold temperatures didn’t happen in areas such as Winnsboro, where the lows were 36 to 37 degrees instead of the 34-degree prediction. But some areas got as cold as expected, including Ruston, where the temperature dropped to 30 to 31 degrees, he said.

Temperatures at 30 degrees or lower for more than two hours would have a significant effect on the crop, which is somewhere near the flowering and heading stages, he said. “Overall, we shouldn’t see widespread damage like last year.”

Harrison said diseases have yet to appear, but he expects they will surface. “I think we’re going to see leaf rust.”

At the field day, Harrison showed test plots of varieties and experimental lines of oats and wheat. He said the LSU AgCenter is one of only four universities to have an oat breeding program. The others are University of Florida, North Carolina State University and Texas A&M. The four universities work together under the Sungrains cooperative to develop new oat varieties

Some oat varieties are bred for deer plots while others are intended for livestock feed or grain.

A new oat line, FL 7020 R6, could be released by the LSU AgCenter and the University of Florida for cattle forage, Harrison said. “This is a really exciting oat because of its excellent forage potential and resistance to rust.”

Harrison said an LSU AgCenter variety sold as Terral LA841 has been a proven performer with good disease resistance for many years and has unique stripe rust resistance that is being studied by graduate students.

LSU AgCenter agronomist Rick Mascagni said a project to determine different varieties’ tolerance to water-saturated soil is showing that some varieties can withstand excess moisture better than others. This is a collaborative study with the University of Arkansas.

LSU AgCenter plant biologist Niranjan Baisakh outlined his project to map the genetic structure of wheat varieties to determine which lines are more disease and insect resistant and identify molecular markers that can be used to select for those resistances. He said variety development usually requires nine to 11 years of work, but genetic screening can reduce that by two to three years.

Baisakh can determine from DNA extracted from a leaf of a young wheat plant if a new line of wheat contains genes of interest.

The genetic marker technology is being used to find new lines that are resistant to the Sencor herbicide, Harrison said.

LSU AgCenter plant pathologist Trey Price showed test plots of his work to determine which varieties have resistance to diseases such as stripe rust. He said the disease tends to thrive in cool temperatures, so farmers should be looking for outbreaks this year.

LSU AgCenter entomologist David Kerns said aphids seldom need to be treated in wheat crops. Spraying for the insects has to be done early, he said, and its effectiveness is questionable.

LSU AgCenter entomologist Fangneng Huang said the Hessian fly is the No. 1 wheat insect pest, but it has not been much of a problem since 2010. He said the best tactic against the insect is selecting a resistant variety.

LSU AgCenter entomologist Sebe Brown said this year appears to be free of armyworm infestations so far. He said two years ago he received calls every day about the insect, but this year he has gotten none.

Brown said scouting for stinkbugs should be conducted into the middle of a field.