Its time to take care of azaleas 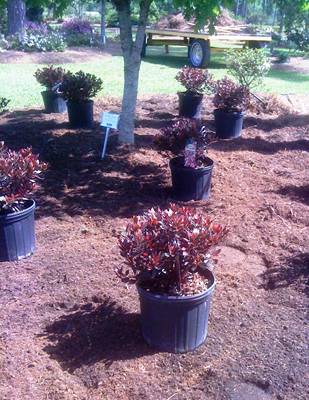 Proper bed preparation and planting are keys to azalea success in the landscape. (Photo by Allen Owings) 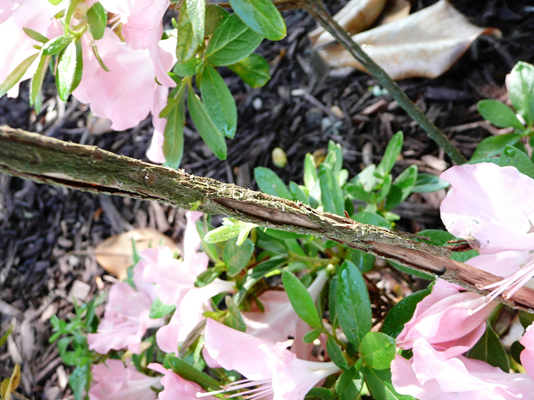 This example of azalea bark split is the result of cold damage. (Photo by Allen Owings)

Azalea leaf gall is a fungal disease that creates unsightly malformation of azalea flowers and foliage. The best control is to remove the galls from the plant. (Photo by Allen Owings)

HAMMOND, La. – Azalea blooms were outstanding this spring, even though the flowers were about two to three weeks later than normal and the cold weather this winter limited the early bloom. In the end, however, many plants bloomed in unison beginning in mid-March. Flowers are continuing now, and bloom on some varieties will stretch through May.

The LSU AgCenter regularly receives questions on azaleas this time of year, but this spring has brought increased interest.

Many of these azalea problems concern drying foliage with partial to whole canopy dieback. This is because of a number of reasons.

One explanation could be over-irrigation or under-irrigation. Azaleas prefer acid soil growing conditions and need raised, well-drained landscape beds. Also, be sure not to place azaleas too deep in the soil when they’re planted.

Over-irrigation is common in both commercial and residential landscapes. If azaleas are over-watered in an effort to counteract dry weather or are simply over-watered because the gardener feels it is “time to water,” plantings could suffer from fungal organisms in the soil that attack and damage or even kill the roots. Dead roots cannot absorb water, so the upper part of the plant withers and dies.

This can often be distinguished from drought stress because it generally occurs in sections of the plant canopy. That is, a section of a plant connected to roots that have been killed will whither and die while another section connected to other healthy roots remains green. If lack of water – or drought – is the problem, the entire plant wilts, although some portions of the canopy can die back more quickly than other sections.

We had an unusually cold winter around the state this year, and temperatures in the teens and lower 20s can cause internal damage to azaleas. This affects the plant's circulation system and interferes with its ability to move water through the branches and into the leaves. Although it occurs in winter, the death of branches often is not apparent until warm weather arrives. Cold-damaged azaleas will show numerous splits and cracks and even peeling in the bark. These symptoms are often sectional as well, with some parts staying green and others dying.

Finally, you could have fungal infections in the branches themselves. These spots of infection cause cankers that block the flow of water to the branch beyond where they occur. Then the rest of that branch withers and dies. This disease is called azalea dieback.

Leaf gall may also be present this spring, although it’s hard to predict when leaf gall will develop. Normally it is worse during cool, high-humidity springs. Leaf gall is a fungal disease that creates unsightly malformation of azalea flowers and foliage. No good fungicide control program exists for this problem. Normally, home gardeners should not be concerned, but they can simply remove the gall-like tissue from the plants.

Along with these problems, azalea lace bugs are active this spring. The initial population is about three to four weeks late getting established in the landscape. Normally, lace bugs get started in late January and last until late February, but populations emerged later this spring.

It is important to control lace bugs now in order to reduce the late summer and early fall populations. Systemic insecticides such as acephate and imedicloprid work well. You can also spray with summer horticultural oil products. Stressed azaleas have more lace bugs than nonstressed plants, and those in full sun have more potential to have lace bugs than azaleas in shady areas.

Everyone plants azaleas in the spring, but many times establishing azaleas is best in fall.

It is important to complete pruning on spring-flowering azaleas by the end of June or the first part of July. If your azaleas flower in spring and fall, prune them within a few weeks after spring bloom is completed. But before you prune, decide if your plants need to be pruned at all. Pruning at the wrong time can reduce bloom display during the next flowering cycle.