Its time to control fire ants 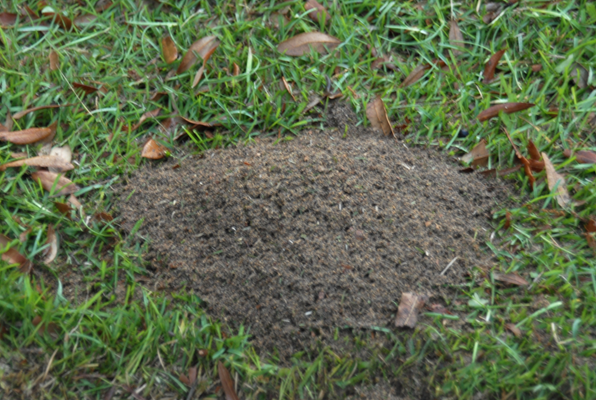 Fire ants are most active when soil temperatures begin to warm up, said LSU AgCenter entomologist Alan Morgan. The critters begin to move around the landscape and forage when temperatures are above 70 degrees but below 90 degrees.

Fire ants can be controlled with baits or granular insecticides, Morgan said.

Baits are designed for foraging ants to collect and carry back to their colonies. They are used in broadcast treatments that involve applying the chemical across the infested area, he said. One of the advantages of broadcast treatments is that colonies may be controlled before mounds appear above the soil surface.

Ants perceive the baits as food, which is picked up by worker ants and taken back to the nest and fed to the rest of the colony, Morgan said. Baits are insecticides that have been impregnated into ground corn cobs and treated with soybean oil. The oil attracts the ants, and the insecticide kills them.

Morgan warned, however, that baits have a short shelf life. The soybean oil that’s used as an attractant tends to turn rancid after a period of time and the ants will no longer feed on the bait.

“It’s important to use fresh bait to be sure your insecticide is effective,” he said.

Broadcast granular insecticides are another type of fire ant control, Morgan said. These insecticides work by forming a relatively long-lasting barrier on the soil surface.

“The residual control of a particular broadcast granular insecticide will depend on its active ingredient,” Morgan said.

Baits are generally only effective in the area where they’re distributed. This means that if homeowners treat only their own properties, fire ants may move in from a neighboring lot, Morgan said.

An alternative many homeowners use is mound treatment alone. This is done as infestations occur and as mounds appear. “It might be necessary to treat a colony more than once in order to kill the queen,” Morgan said.

While mound treatments are watered in, baits must be distributed when the weather is dry – no rain and no wet lawns, Morgan said.

The entomologist also warned that some fire ant formulations are not labeled for use in vegetable gardens. “It’s important to read the label and use the products appropriately,” he said.