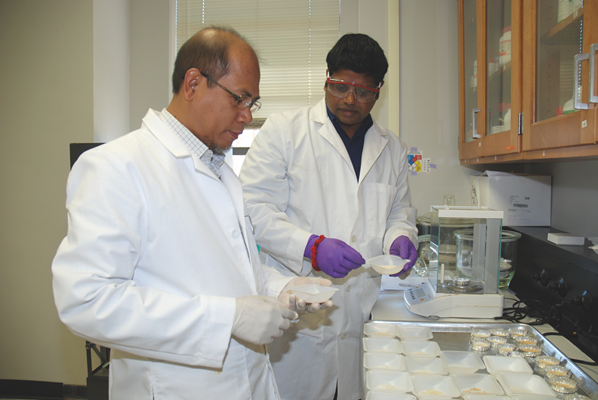 Usman Ahmad, left, an agricultural engineer from Bogor Agricultural University in Indonesia, and LSU AgCenter engineer Subramaniam Sathivel examine rice samples for a study on rice milling and storage. Ahmad is one of the latest Borlaug fellows spending 12 weeks in the United States working with an AgCenter scientist. (Photo by Johnny Morgan)

BATON ROUGE, La. – Increasing international cooperation in research has been the goal of the LSU AgCenter for many years, and during the past three years scientists from around the world have been able to conduct research in labs here through the Norman E. Borlaug International Agricultural Science and Technology Fellowship Program.

After working together in the United States, LSU AgCenter researchers have in turn spent up to one week in the institutions of the international scholars, learning about agriculture in their home countries.

Program coordinator Susan Karimiha, said scientists from 11 countries have used the opportunity to gain new experience at the LSU AgCenter and learn new techniques they can share in their countries. The goal of the exchange is to increase food security and economic growth.

The most recent fellow is Usman Ahmad, an agricultural engineer from Bogor Agricultural University in Indonesia.

“Dr. Ahmad is a visiting researcher in the lab of LSU food engineer Dr. Subramaniam Sathivel, who is involved in research related to food engineering and value-added food products,” Karimiha said.

While here, Ahmad studied the effects of milling on cooking quality and storage quality of rice, Sathivel said.

Ahmad also worked with rice bran, which is a source of fiber that is normally removed during milling.

“Rice can be made into noodles and cereal, but most people in my country like whole rice,” Ahmad said.

He said his goal while in the United States is to see the different ways rice is processed.

“We are looking for ways to develop other products from rice,” Ahmad said. “In my country, we do rice processing, drying and milling, but it’s a totally different environment.”

Sathivel said for the last three years, he has submitted a Borlaug Fellowship application and has hosted fellows from Guatemala, Ghana and Indonesia.

“To have Dr. Ahmad, a very intellectual and talented person, to visit our lab is very important for us,” he said.

Sathivel has been working in food processing and engineering at the LSU AgCenter for the past seven years. He began his career with fish oil and designed and developed a cost-effective way to purify it.

Karimiha said the Borlaug Fellowship Program is sponsored through the United States Department of Agriculture Foreign Agricultural Service and visiting scientists spend up to 12 weeks working on projects in U.S. labs.