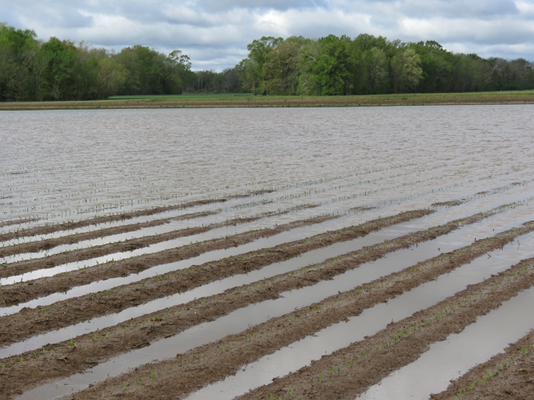 Flooded cornfields, such as this one near Winnsboro, La., are creating concern for a number of Louisiana farmers. (Photo by Josh Lofton)

WINNSBORO, La. – Recent heavy rains – as much as 6 to 8 inches – in corn-producing areas of Louisiana have flooded fields that already have been planted.

A significant portion of the state’s corn crop is between emergence and the 2-leaf to 3-leaf stage, said LSU AgCenter corn specialist Dan Fromme. Corn is extremely vulnerable to flooding prior to the 6- leaf stage or when the growing point is near or below the soil surface.

Two to four days of flooded conditions are the most that corn can survive when it is less than the 6-leaf stage, Fromme said. After about 48 hours of flooding, the oxygen supply in the soil is depleted, and the corn plants cannot perform or sustain important functions.

Air temperature also is important. If temperatures are greater than 77 degrees, flooded corn may not survive even 24 hours.

Corn plants that survive a flood in their early stages of development still might suffer long-term effects and ultimately low yield. The implications occur later when soils become dry and the root systems are not adequately developed.

Overall, crop injury to flooding of less than 48 hours should be limited.

Flooding also can lead to disease problems such as crazy top. This disease develops when soils have been flooded shortly after planting or before plants are in the 4-5 true leaf stage. Saturation for 24-48 hours is sufficient for infection to occur.

In addition to corn growth and development, farmers who already have applied nitrogen may have to worry about the amount of fertilizer lost during these saturated periods, Fromme said. While nitrogen loss may occur, the amount varies highly with environmental conditions and management practices.

Nitrogen that has been recently applied is less likely to be lost. However, application seven to 14 days ago can result in higher levels of nitrate in the soil and in turn higher potential loss.

Luckily, most of the areas that have experienced these saturated conditions have remained cool, Fromme said. Cooler temperatures allow those fields to be saturated longer before substantial nitrogen loss occurs.

Limited information is currently available on the use of “rescue” nitrogen applications to account for any potential losses, he said. While it may be difficult, the best management would be to allow the corn to bounce back and reevaluate nitrogen needs as the corn recommences growth.

If additional “rescue” fertilization is needed, a mid- or late-season application will suffice.