Dont be alarmed by the loud bugs 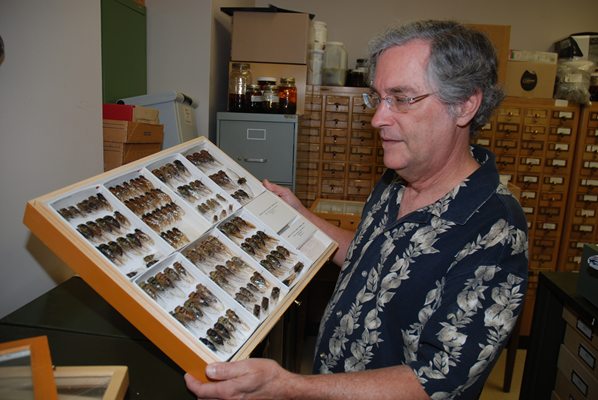 Christopher Carlton, LSU AgCenter entomologist and director of the Louisiana State Arthropod Museum, displays 13-year cicadas that are scheduled to emerge and make lots of noise during late April and early May. He said the songs of the cicadas are actually mating calls.(Photo by Johnny Morgan)

These specimens of 13-years cicadas were collected from the brood of 1980. Christopher Carlton, LSU AgCenter entomologist and director of the Louisiana State Arthropod Museum, said 2014 is a 13th year and the insects are scheduled to emerge as soon as the ground temperature reaches 65 degrees. (Photo by Johnny Morgan)

BATON ROUGE, La – People can expect to hear loud noises outside throughout eastern Louisiana because this is the year for the adult emergence of three species of Magicicada, commonly called 13-year cicadas.

Scientists say the insects are biologically programmed to remain in the ground for 13 years, and as soon as the soil reaches 65 degrees during year 13, they will emerge in mass numbers.

Christopher Carlton, LSU AgCenter entomologist and director of the Louisiana State Arthropod Museum, said these insects stay in the ground in the nymphal stage for 13 years in the southern states, but in the areas north of southern Illinois they emerge every 17 years.

“When these insects emerge in early May, their only goal in life is to mate, lay their eggs and then die,” Carlton said.

Many homeowners can rest their minds because the insect will not eat everything in sight.

Carlton said cicadas only feed on fluids from tree roots for the 13 years while underground. Once they emerge, they will not feed as adults. The only damage they may cause will be to the tips of branches where they create scar tissue to lay their eggs.

Carlton said other than life cycle, the 13-year and 17-year cicadas are exactly the same, and in the boundary region, there is overlap where they actually hybridize.

“In any given brood, such as Brood-22 – the 13-year cicada emerging this year – there are three different species,” Carlton said. “They all look alike, but the calling patterns ‘songs’ they use to attract mates are different.”

The female cicadas identify males they are supposed to mate with based on song, and there is also a daytime calling difference, he said.

One cicada species calls fairly early in the morning; another calls at midday; and the other in the late afternoon, he said.

“So there are three species of these black and red-eyed cicadas that don’t really cause much damage, but they will arrive in large numbers. And they sing, so they have the possibility of being really loud for a few weeks,” Carlton said.

The last time of a mass emergence was in 2001, but Carlton said a small number work on a different biological clock, so a few magicicadas emerge either a little early or a little late.

In addition to the 13-year cicadas that will emerge in a few weeks, another species is seen in this area each year, but it is not related to Magicicada.

“These are called ‘Dog Days Cicadas’ that we see every year from mid-to late summer. They are larger. And unlike the 13-year cicadas, these are very good escape artists,” Carlton said. “You’ll see them fly 100 yards to get away from a bird.”

He said many of the 13-year cicadas will be meals for birds, squirrels and other animals that find them tasty because they don’t fly as well as the annual late-summer species.

Carlton said this insect is very challenging to study because it’s generational – the average scientist will only live long enough to study three, maybe four broods.

Chris Simon, a geneticist at the University of Connecticut, will visit LSU to research and conduct seminars in early May, Carlton said.

“Chris and her group have been studying these cicadas for many years,” he said. “They travel all over the country because there’s a brood of 13- or 17-year cicadas emerging somewhere every year.