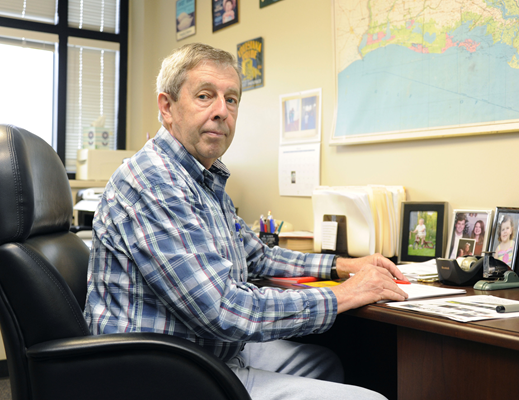 Chris Clark, LSU AgCenter researcher, has been elected a fellow of the American Phytopathological Society. Photo by Olivia McClure

BATON ROUGE, La. – Chris Clark, LSU AgCenter plant pathologist, has been elected a fellow of the American Phytopathological Society in recognition of his contributions to managing major sweet potato diseases.

Unlike many plant pathologists who specialize and study only one disease, Clark has worked with a variety of diseases in his 37 years at the AgCenter.

"Over time, I've worked with all of them — nematodes, fungi, bacteria, viruses," Clark said. "We try to balance serving our local sweet potato industry with advancing the science where opportunities present themselves."

In Louisiana, soil-borne diseases such as Streptomyces soil rot were a major problem, Clark said. Being in the soil makes such diseases difficult to control and means growers cannot avoid them, so developing resistant varieties is important.

Clark was part of a team of AgCenter scientists who developed the popular Beauregard sweet potato variety in the 1980s, which was the first variety resistant to Streptomyces soil rot.

Viruses, which tend to accumulate in planting material, also limit sweet potato production, Clark said. His research on viruses led to a virus-tested seed program that produces clean plants from infected plants, then uses those plants to produce clean seed, which is then sold to growers.