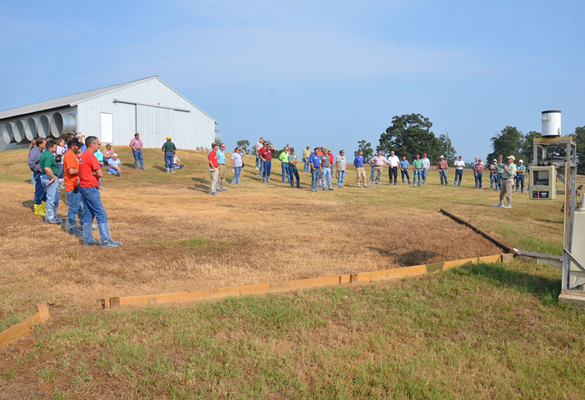 Poultry producers attending a field day at the LSU AgCenter Hill Farm Research Station listen to Bill Owens, animal scientist, talk about a study to determine whether ventilation fan dust from chicken houses has any effect on runoff water. The study is being funded by the Natural Resources Conservation Service. Photo by Bruce Schultz

Poultry producers attending the Poultry Field Day at the LSU AgCenter Hill Farm Research Station look at a truck used by farmer Jason Anderson, of Union Parish, which has a guidance system to make sure a field is fully covered at the proper rate. Photo by Bruce Schultz 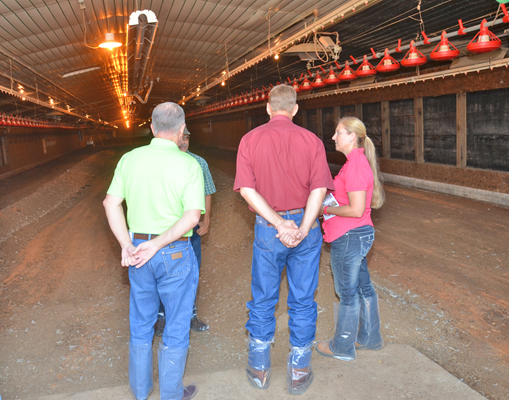 Theresia Lavergne, far right, talks with poultry producers in a chicken house at the LSU AgCenter Hill Farm Research Station. Lavergne told farmers about a project to pile chicken litter in rows to pasteurize the material between flocks. Photo by Bruce Schultz

HOMER, La. – Poultry producers from across the state were taught practices that will make their operations more environmentally friendly and efficient at a field day at the LSU AgCenter Hill Farm Research Station on Sept. 18.

Half the day was used to show producers research being conducted and to explain what they can do to improve their operations, while the final half of the day was devoted to classroom work aimed at becoming certified in the Louisiana Master Farmer Program.

Carrie Castille, Louisiana Department of Agriculture and Forestry associate commissioner, said officials from the U.S. Environmental Protection Agency continue to move ahead with inspections of poultry farms. The EPA has sent letters to producers asking about the specifics of their operations, including the number of birds, mortality management and litter management.

“We felt it was not necessary to send these letters,” Castille said. “Nutrient management is a state issue and should be addressed at the state and local level with the ultimate goal of achieving conservation.”

Theresia Lavergne, LSU AgCenter poultry specialist, talked about pasteurization of poultry litter in chicken houses in between flocks. She said windrowing the material into rows 2-3 feet high and 4-6 feet wide will produce enough heat, roughly 131 degrees, to kill 90-95 percent of the pathogens and bacteria in the litter in seven to 10 days.

The litter needs 30-35 percent moisture to obtain the necessary temperature level of 131 degrees, she said, and a thermometer should be used to make sure adequate heat is reached. She said the rows should be turned in three to five days after they are made.

Specialized equipment is sold by several companies to make the rows with a tractor, she said. But even with the equipment, the practice is not done quickly, Lavergne said. ”You need at least 10 to 14 days of out-time for the procedure to be used and to be effective.”

She said a project to study litter pasteurization is funded through a grant from the Natural Resources Conservation Service. Future plans call for comparison of the nutrient level in materials used in windrows and stored in a litter shed, which will be built at Hill Farm before year’s end.

The NRCS grant also will fund four more poultry field days during the next two years.

In addition, the NRCS grant is funding a study of poultry house ventilation fan dust on water quality.

“I am not aware of any published data that substantiates fan dust as an issue or causing a problem,” Owens said.

He said the EPA has pursued enforcement action against some poultry producers on the East Coast. That resulted in a lawsuit in West Virginia that remains pending.

“We need data from our local area on the impact of fan dust before declaring it a problem,” Owens said.

He said a study, also funded by NRCS, will analyze runoff water from two poultry houses at the Hill Farm to determine if the dust contains nutrients that affect water quality.

Owens also said producers can use the NRCS Water Quality Index for Agricultural Runoff to assess their individual farms, which is online at http://199.133.175.81/WQIPublic/.

Jason Holmes, LSU AgCenter county agent in Union Parish, demonstrated how to calibrate machinery used to spread chicken litter. Material dropped onto a tarp on each of three passes with a manure spreader was weighed, and the average was applied to a formula that determined the tonnage per acre.

Holmes said the method ensures that producers are spreading the proper amount on pastures. He said analysis of the nutrient content should be done before the application.

Allen Hogan of the Louisiana Master Farmer Program said rice farmers are eager to buy chicken litter, but they require an analysis.

Holmes said a computer-guided spreader will provide proper coverage and ensure that litter is spread evenly across a field.

Union Parish poultry farmer Jason Anderson brought his spreader rig to the field day. He said the bed and guidance equipment cost roughly $18,000, but it paid for itself in the first year.

Chris Coreil of the NRCS said the EPA is determined to enforce the Clean Water Act. “Inspection and scrutiny of our waterways will be more intense.”

Coreil agreed that one way of getting rid of litter is to sell it to rice farmers who want soil amendments after laser-leveling their fields.

Coreil said vegetative filter strips are needed to stop or reduce the flow of runoff water from chicken houses, and vegetation buffers 30 feet wide along streams is something the EPA desires. “It’s the last line of defense.”

Filter strips can simply be an area of tall grass, Coreil said, that will trap the flow of sediment and prevent it from reaching waterways. The area should not be used for grazing, he said.

Also, he said, compacted soil will increase runoff, and the extent of soil compaction can be determined with a device called penetrometer.

Participation at the field day satisfies completion of the first two phases of the Master Farmer program, said Ernest Girouard, program coordinator. The final phase is writing and implementing a conservation plan.

Obtaining Master Farmer status legally gives producers the presumption that their agricultural enterprises are in compliance with state soil and water requirements, Girouard said. “Becoming a certified Master Farmer means you are doing everything you can to make sure your farm is sustainable and environmentally in compliance.”