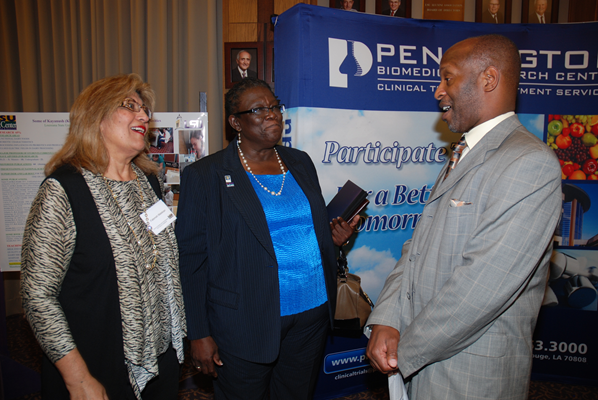 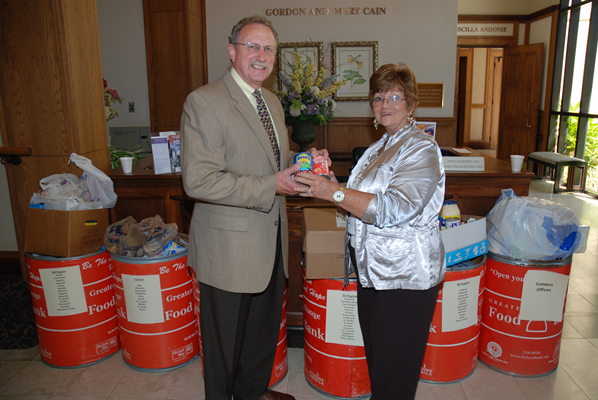 Mike Manning, president and CEO of the Greater Baton Rouge Food Bank, receives six barrels of non-perishable food and more than $500 in cash from Martha Lattimer, president of the Louisiana Volunteers for Family and Community at the LSU/SU Food Science Conference at the LSU Lod Cook Conference Center from Sept. 10-12. (Photo by Johnny Morgan)

BATON ROUGE, La. – Faculty members and volunteers from across the state involved in nutrition education spent Sept. 10-12 at the Lod Cook Conference Center at LSU recognizing the new School of Nutrition and Food Sciences.

Gina Eubanks, vice chancellor for extension at the Southern University Agricultural Center and program leader for food and nutrition at the LSU AgCenter, said the purpose of the conference was to celebrate nutrition and food sciences coming together.

“When we talk about celebrate, we mean all parties involved, administrators, faculty, staff, researchers, graduate students, all who make up the school, plus the volunteers” Eubanks said.

The conference consisted of a wide range of speakers and topics so everyone was able to grow, Eubanks said.

“I used PPF as a way to thank all of those who attended this conference,” Eubanks said. “What it means is the past, present and going into the future.

“A lot of planning went into making the conference happen, that’s the past. Once we got here, it became the present. And whatever was gained here has to be shared – that is the future.”

Michael O. Minor, pastor of Oak Hill Baptist Church in Hernando, Miss., was the featured speaker for the conference.

Minor is best known as the “Southern pastor who banned fried chicken in his church.” He said when he began pastoring the church 18 years ago, it seemed that he was having funerals much too often, so he decided to make his congregation more heath conscience.

“The biggest problem that I had actually came from me,” he said. “I had to realize that it would take time.”

Minor said as the under shepherd of his flock, it is his responsibility to be committed to helping the members to be spiritually as well as physically healthy.

“It just so happened that what we began in our congregation has spread beyond our walls,” Minor said.

Minor said there was some grumbling in the beginning, but the food that’s served at his church is free, so it’s not likely to be turned down.

“But the good thing about what we’re doing is have people try healthy food at church, then they are more likely to prepare it at home,” Minor said.

In addition to being a cheerleader for health in his congregation, Minor also serves as national director for the H.O.P.E. Health and Human Services Partnership of the National Baptist Convention, USA, Incorporated – the nation’s largest African-American religious denomination.

One general session looked at how people in the seafood industry were able to turn an issue they had after Hurricane Rita into research and now into action, through the Delcambre Direct online seafood marketing project, said LSU AgCenter and Louisiana Sea Grant area marine agent Thomas Hymel.

“We discussed the resilience of the coastal region that has been badly damaged by hurricanes but is developing with seafood farmers markets, a grocery store and other entities that allow shrimpers and others to demand a higher price for their product,” Hymel said.

Other sessions ranged from using social media for a healthy community to deciphering food labels.

The conference was a way to bring together the faculty and staff members from the Department of Food Science and the former Division of Human Foods and Nutrition to celebrate the creation of the new School of Nutrition and Food Sciences, said associate department head Karen Overstreet.

“We want enthusiasm for the future, and to show the tremendous potential in our new school and to develop a sense of camaraderie,” she said.

The final day of the conference featured a panel discussing ways to create active, healthy communities.

Social media and new technologies were prominent topics on the agenda, but more practical topics were addressed as well.

Gaye Sandoz, director of the LSU AgCenter food incubator, provided information on how the food incubator works and explained the resources available to help individuals or companies get their food products from the idea stage to the store shelf.

Sandoz stressed that food does not just fill a basic need in Louisiana; it’s part of the local economy.

At the close of the conference, Mike Manning, president and CEO of the Greater Baton Rouge Food Bank, was presented six barrels of non-perishable food and more than $500 in cash donated by the conference participants.