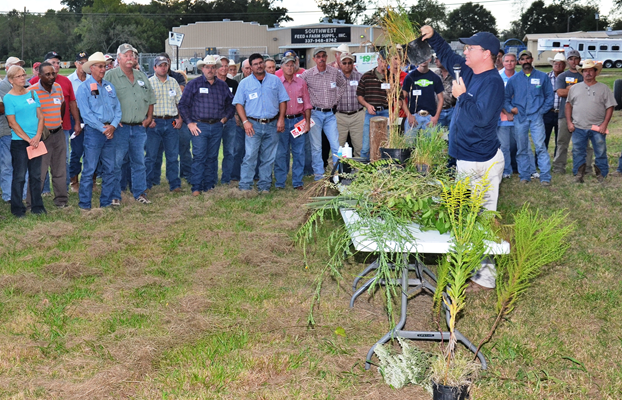 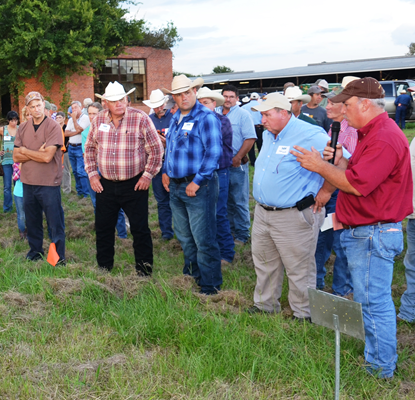 OPELOUSAS, La. – An LSU AgCenter cattle researcher told producers the use of ultrasound technology to get a glimpse of an animal’s beef quality removes the mystery out of buying cattle and can result in better prices at the sale barn.

Page advised cattle owners not to buy bulls without proper data that can be obtained with a $5 ultrasound procedure. The information will lead to better calves that bring more money, he said. “People are willing to pay for quality.”

Scanning is best used after a calf is weaned and up to a year old, he said. Calves with inadequate intramuscular fat will never be able to make up that deficiency.

Cattle producers heard from veterinarians John Fontenot, of Opelousas, and Jacques Fuselier, of the LSU School of Veterinary Medicine, who recommended fertility testing for bulls.

Fontenot conducts bull testing with Stan Dutile, LSU AgCenter county agent in Lafayette Parish, each spring for $30 a head. Dutile said 15 to 18 percent of the bulls tested have had fertility problems during the past 15 years that the testing has been done.

Breeding soundness testing should be done when a bull is at least 15 months old and 30 to 60 days before breeding, Fontenot said.

Fusilier advised that several conditions can affect fertility. Mineral deficiencies can limit a bull’s reproductive potential, especially if a bull is not getting enough selenium and zinc. Excessive use of cottonseed in cattle feed can lower fertility, and he recommended limiting cottonseed to no more than 7 percent of feed volume.

LSU AgCenter veterinarian Christine Navarre warned about trichomoniasis infections. Since 2010, she said, bulls sold in Louisiana or brought into the state have to be tested for the disease, which causes cows to lose their fetuses.

Recent testing has shown an increase in infections among tested bulls, she said. But at a cost of about $100, testing does not ensure a bull is not infected. The only certainty is breeding virgin cows to virgin bulls or artificially inseminating virgin cows.

Vaccination can help rid a herd of an infection, she said, but the process can take years.

The best control is achieved when the weeds are young and small, but they can be killed late season, he said.

The herbicide Outrider works well on sedges and johnsongrass, and Crossbow or Remedy is effective on briars. Honey locust, a toxic plant, is controlled with Grazon Next or Chaparral, Strahan said.

Chinese privet can be taken out with Arsenal.

But Strahan said herbicides aren’t always the answer. Broomsedge is often a problem in neglected fields, and it can often be controlled with fertilizing the soil and clipping or grazing. Palmettos often can be kept in check with disking.

LSU AgCenter forage specialist Ed Twidwell said the optimum time for planting ryegrass is mid-October to mid-December. “If you plant too early, you are going to be competing with summer growth.”

Ryegrass seed needs full sun to grow, Twidwell said. Reducing the existing grass with Roundup can be a good way to allow more light onto the soil.