Former student tells how insects have been used in war 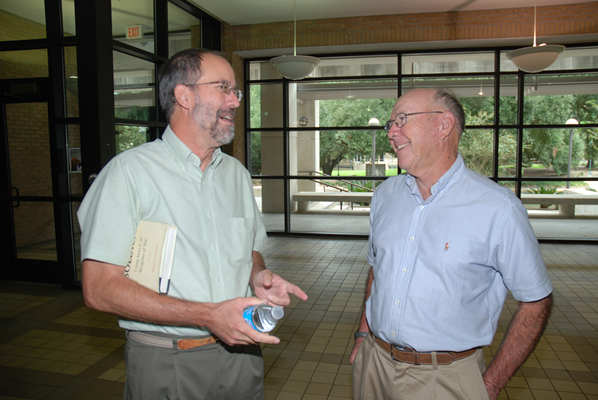 Jeff Lockwood, a professor at the University of Wyoming and award-winning writer, shares a light moment with LSU AgCenter professor emeritus Abner Hammond before his Oct. 4 presentation about his latest book, "Six-Legged Soldiers: A History of Insects in Torture, Terrorism, and Warfare," as part of the Jerry B. Graves Distinguished Seminar Series. (Photo by Johnny Morgan)

BATON ROUGE, La. – On an average day, most people wouldn’t think of insects and soldiers as being synonymous, but a recent lecture on the LSU campus shows just how often insects have been used as weapons of war through the ages.

Jeff Lockwood, a professor at the University of Wyoming and award-winning writer, presented a lecture about his book "Six-Legged Soldiers: A History of Insects in Torture, Terrorism, and Warfare" on Oct. 4.

LSU AgCenter entomologist Tim Schowalter introduced Lockwood as a former student, who received his Ph.D. in entomology from LSU in 1986, and told the audience that the lecture is part of the Jerry B. Graves Distinguished Seminar Series sponsored by the Department of Entomology.

Lockwood said he has always harbored a fascination and curiosity about insects. “There just seemed to always have been something profoundly alien about them,” he said.

“I think I’ve always held this long and morbid interest in military history,” he said. “I think this might have emerged from the fact that I grew up in the midst of the Vietnam War, and my older brother was just at the cusp of the age of young men who were being drafted.”

He also said he grew up with Life magazine, which provided fantastic and terrifying images that he still can’t get out of his mind about what it was like to be in warfare.

“So these two sources of fascination came together for me,” Lockwood said. “Now if I had been a fiction writer, I may have been able to pull something off that would have enchanted children and given them nightmares.”

Lockwood said he did write a novel and submitted it to several agents, who confirmed that he was not a fiction writer.

Within this framework, insects have been used in three basic capacities – to inflict pain, to destroy agriculture and to transmit disease.

“When used to transmit disease, the insects used most are fleas, flies and mosquitos,” he said. Since the Paleolithic Age of man, insects have been used to inflict pain.

The earliest use of insects to serve as instruments of war include the use of nests of stinging insects catapulted into the enemy’s midst, Lockwood said.

“What is known about this project is at the height of the experiment, the Japanese were able to produce half a billion plague-infested fleas a year,” Lockwood said.

The Japanese tried several modes of dispersing the fleas into enemy territory, but finally they just dropped clouds of infested fleas over the territory.

Lockwood said Unit 731 was responsible for developing a bomb that released flies as a means to spread cholera.

“This weapon was used in two massive assaults which triggered regional epidemics that took the lives of over 410,000 Chinese,” he said. “More people were killed in China from entomological weapons than were killed by atomic bombs dropped on Hiroshima and Nagasaki.”

Lockwood said while the Japanese were spreading plague-infested fleas and cholera-coated flies, the Germans were mass-producing Colorado potato beetles to decimate England’s agriculture.

The American entry into the world of entomological warfare came during the Cold War in the name of Operation Big Itch, Lockwood said.

“In 1954, over the skies of the Utah desert, fleas rained down on cages of guinea pigs,” he said.

A second experiment carried out by the American military was the use of mosquitos to spread yellow fever. “Operation Big Buzz was a simulated mosquito-based attack with more than one million mosquitos dropped on rural Georgia,” Lockwood said.

In more recent years, the Mediterranean fruit fly was seen in increasing numbers in California during the 1980s. A group calling themselves The Breeders claimed responsibility for the release of the insects, he said.

After spending hundreds of millions of dollars, experts were never sure if the insects were part of a terrorist attack.

An independent analysis of the case by the Belfer Center for Science and International Affairs at Harvard’s Kennedy School of Government in 2001 concluded that the extortionists had been for real.

“When preparing for enemies, America has high-tech weapons and skill, but that doesn’t work well when the enemy saps our ability to fight by taking advantage of some weapons that are readily at their disposal – like insects,” Lockwood said.