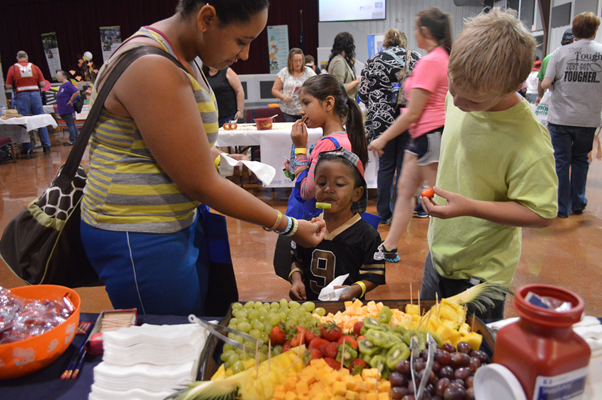 Chelsea Shepherd helps her little brother, Jacob Martinez, 4, try some kiwifruit at one of the exhibits at the Family Fall Fest in Oak Grove, sponsored by the LSU AgCenter, Southern University and the Pennington Biomedical Research Center. “He’ll eat anything,” she said. Photo by Linda Foster Benedict 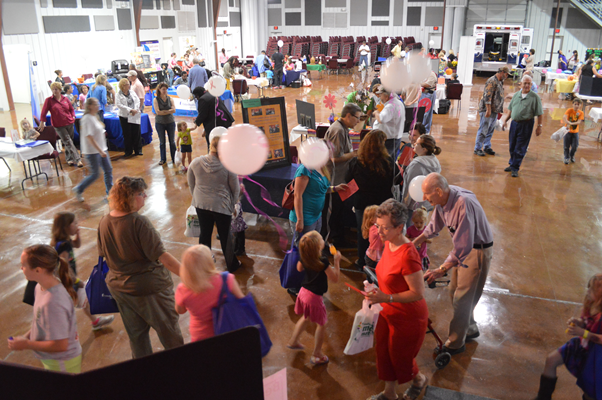 Nearly 400 people came from throughout West Carroll Parish to participate in the first Family Fall Fest in Oak Grove during the morning of Oct. 12. Photo by Linda Foster Benedict 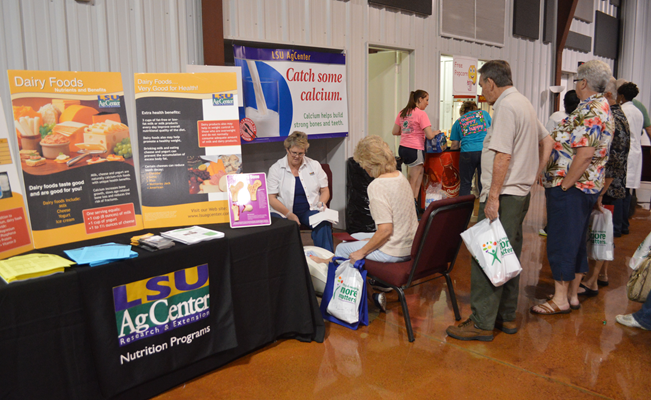 Terri Crawford, extension agent seated in the center, administered a scan test of the heel of the foot to check people's bone density. If the level was below normal, she encouraged them to visit their doctor. Photo by Linda Foster Benedict 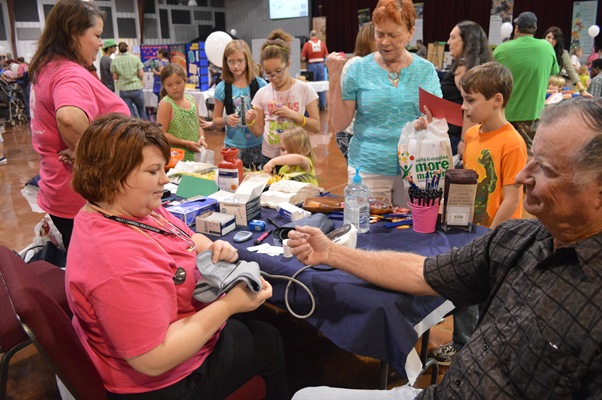 Stephanie Allen, a nurse with West Carroll Health Systems sitting at left, said blood pressures tended to be a bit high among participants at the fest; sugar levels tended to be good. Photo by Linda Foster Benedict 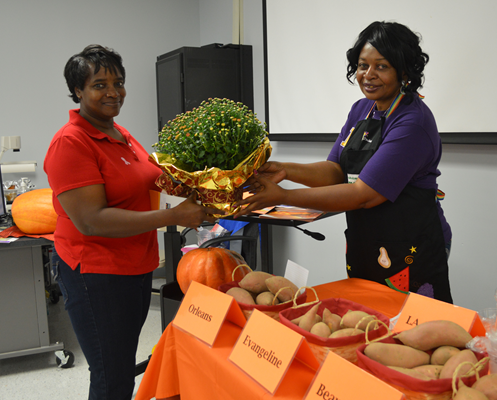 Bobbie Anderson, who lives in Pioneer, won the door prize offered at the session on cooking with sweet potatoes taught by Dorris Thompson, a nutrition educator with the LSU AgCenter. Photo by Linda Foster Benedict

OAK GROVE, La. – Cars were lined up for a mile trying to get into the Family Fall Fest at the Thomas Jason Lingo Center on a sunny Saturday morning on Oct. 12, reported Brenda Bradley as she arrived.

Bradley, a member of the town council here, was one of the planners for this event, which attracted more than 400 men, women and children of all shapes, ages and sizes from across West Carroll Parish.

The fest theme was “Live Life Healthy,” and it featured more than 20 health-related exhibits, free food, health screenings, door prizes and outdoor activities for the children, which included inflatable play equipment, a petting zoo and games.

“We were so pleased with the turnout,” said Monica Stewart, LSU AgCenter family and consumer science agent and the chief organizer. She had worked tirelessly to promote the fest, the first ever of this scale in this parish of 11,600 in the northeast corner of Louisiana.

She had blanketed the parish with radio spots, digital signs and flyers distributed in all the schools and even at the Oak Grove High School football game the Friday night before.

The purpose of the fest was to kick off the new Healthy Communities program sponsored by the AgCenter in partnership with the Pennington Biomedical Research Center and the Southern University Agricultural Center, said Stewart, who was hired June 1, 2013, as the program’s coordinator.

The goal of Healthy Communities, which will span the next four or five years, is to improve the health status of the people who live in West Carroll Parish, one of the poorest counties in the nation and among the highest for obesity problems.

The program’s success in this parish will then be used as a model for similar programs in other Louisiana parishes, according to Gina Eubanks, LSU AgCenter program leader for food and nutrition. Louisiana holds the national record for the highest percentage of people overweight or obese – 34.7 percent. The most recent state-by-state data on obesity rates for youth 10-17 years old show Louisiana in fourth place with 21.1 percent, Eubanks said.

“This is so good for our community,” Bradley said of the Healthy Communities program. She is executive director of Partners in Prevention, which works in the schools to prevent drug and alcohol abuse. Her organization was one of the exhibitors at the fest.

Bradley also is a member of the Healthy Communities advisory board that Stewart is putting together. This board, which will include about two dozen people from throughout the community, will oversee and provide direction for the program.

“We want this effort to be locally driven and to meet the needs of this community,” said Stephanie Broyles, a scientist with Pennington Biomedical. “We want to develop an intervention strategy that will actually work and help people become healthier.”

The idea for Healthy Communities started when top officials with the LSU AgCenter and Pennington Biomedical met in 2012 to explore the possibility of together obtaining funding from the National Institutes of Health and the Johnson&Johnson pharmaceutical corporation for health intervention in a rural community.

With Pennington Biomedical’s national reputation for nutrition and health research and the AgCenter’s ability to run effective educational programs in every Louisiana parish, the two groups began pursuing grants.

So far, however, no proposals have received major funding, but the officials decided to move forward anyway in the hope that grants will materialize eventually. Pennington Biomedical has used funds to support the project secured through the Louisiana Clinical & Translational Science Center, which is a partnership with the LSU Health Science Center and Tulane University to support innovative research.

“The Delta region in our state has some of the country’s highest levels of poverty, obesity and chronic disease. We aim to concentrate efforts in this region, starting with West Carroll Parish. By working together and combining our resources, we feel we can make a difference,” said Bill Richardson, LSU vice president for agriculture.

West Carroll Parish was selected because even though among the poorest and unhealthiest in the country, it has an infrastructure in place for community betterment. The Lingo Center , for example, where the Fall Family Fest was held, is a 31,000-square-foot facility that includes an auditorium, meeting rooms, kitchen and the AgCenter extension office. Built in 1997, it is managed by the Northeast Educational Development Foundation and offers a host of entertainment and educational events as well as an RV park.

Oak Grove is the largest town in the parish but has few parks or other opportunities for physical activity. The other towns in the parish have no such amenities, according to Terri Crawford, AgCenter family and consumer science agent.

Crawford along with other representatives from the AgCenter and Pennington Biomedical met with about 40 people from throughout the parish in July 2012 to lay the groundwork for the project. They asked the group to assess the parish’s health status and the issues and barriers to improvement.

“They told us there was a lack of access to physical activity and limited access to fresh produce,” Crawford said.

When asked to give school-like grades on the health status of the West Carroll Parish people, the group gave a C-minus to the adults and a D to the teens, Crawford said.

“They were all in favor of any health education and intervention programs we could bring their way,” Crawford said.

The Healthy Communities program will serve as a laboratory for testing how best to conduct chronic disease intervention in a rural setting.

“We want to find how the environment enables or inhibits health choices,” said Broyles, who is a core leader with the Louisiana Clinical & Translational Science Center.

Broyles said the LSU Public Policy Research Lab will conduct a phone survey in which people will be asked what they eat, what health conditions they have and how often they exercise. The Pennington Biomedical team will travel to the parish and gather physical evidence, including blood samples and blood pressure readings, as well as more survey data.

Melissa Cater, an assistant professor with the AgCenter Organization Development and Evaluation office, is also gathering baseline data. In August, she, Stewart and Crawford canvassed the parish recording places where people could buy fresh fruits and vegetables.

They found 18 spots and will go back in a few years and see if this number and the quantity of fresh produce available have increased.

The advisory committee will help the educators and researchers determine the best ways to reach people and garner support to build more recreational facilities, community gardens and fresh food markets.

There will definitely be more health fairs, such as the one on Oct. 12, Stewart said.

“This is the best one I’ve been to,” Bobbie Anderson, of Pioneer, a tiny town just outside Oak Grove, said of the fair.