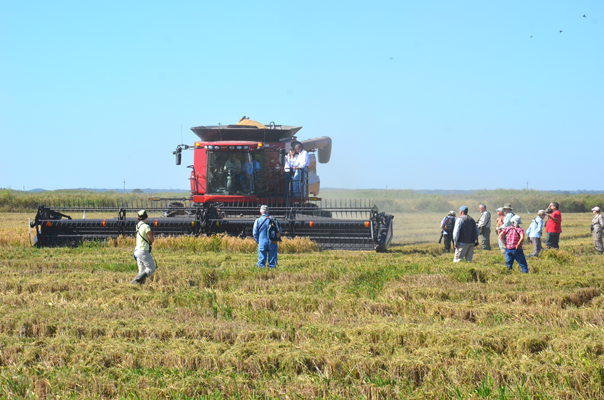 Birdwatchers attending the Yellow Rail Festival wait for one of the small, elusive birds to fly out of a rice field being harvested near Thornwell, La. More than 100 birdwatchers from 27 states, Washington, D.C., and Canada attended the event. (Photo by Bruce Schultz) 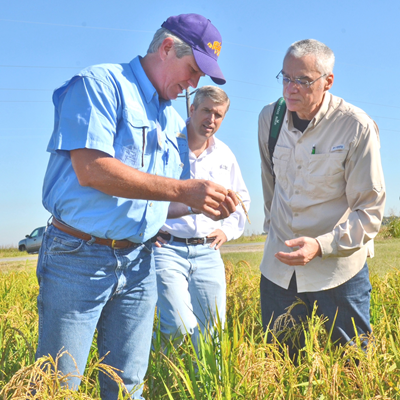 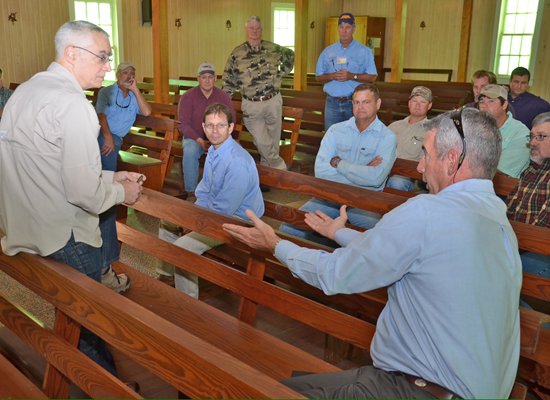 Michael Hensgens, of G&H Seed Co., explains to Bob Perciasepe, deputy administrator of the U.S. Environmental Protection Agency, why rice farmers need approval of a bird repellent. At an Oct. 24 meeting in Thornwell, La., Perciasepe assured farmers he would look into the issue as well as another material used to control blackbirds. The EPA official was in southwest Louisiana to attend the Yellow Rail Festival and visit the White Lake Wetlands Conservation Area. (Photo by Bruce Schultz)

THORNWELL, La. – The No. 2 official with the U.S. Environmental Protection Agency assured farmers Thursday (Oct. 24) that he will make sure the agency is moving forward with its review of a blackbird repellent used to protect rice seed.

Bob Perciasepe, EPA deputy administrator, was in Jefferson Davis Parish on Thursday to attend the Yellow Rails and Rice Festival, named after a small migratory bird that winters in Louisiana wetlands, including rice fields. More than 100 birdwatchers from across North America attended the event.

Farmers told Perciasepe the federal approval for the repellent, AV1011, will be needed quickly so they can use the material again in 2014 as it has been used for the past several growing seasons.

“I need to make sure we keep an eye on this,” Perciasepe said in response.

Farmer Clarence Berken said the material also helps maintain water quality in streams and bayous because it prevents farmers from having to flood fields to protect seeds from blackbirds.

Farmer Paul Johnson told the EPA official that without AV1011, he has to spend roughly $70 an acre on propane popguns, shotgun shells and personnel to keep birds out of his fields, compared to $20 an acre for the chemical. “Peace of mind doesn’t factor into that cost, either,” Johnson said.

Hensgens told Perciasepe the chemical is needed by January when seed is being treated in preparation for planting in early spring.

“We’ll look at this and we’ll get it done,” Perciasepe told the group.

Steve Linscombe, director of the LSU AgCenter Rice Research Station, told Perciasepe federal approval also is pending for another chemical, DRC1339, that is used to control blackbirds. He said the chemical’s registration, which is under review for renewal, is now faced with additional tests required by EPA that would cost $800,000, making the chemical cost-prohibitive.

Linscombe said studies already have shown the residual amount of chemical left behind by birds would total 22 grams for the entire season of use in the rice growing area.

Farmer Donald Berken urged the deputy administrator to use restraint in EPA’s enforcement of the Spill Prevention Containment and Countermeasures regulations being imposed on fuel storage tanks. Berken said the regulations could be affected by the pending farm bill, and he said not enough information has been available except on a website.

“I’m pretty confident we’ll work with the state before anything will happen,” Perciasepe said. “I think we will proceed with great care.”

“My view is we have the same objective in our missions,” he said.

Ben Scaggs, of the EPA’s Gulf of Mexico Program, said a relationship has been established with the Louisiana agricultural community through the LSU AgCenter’s Louisiana Master Farmer Program.

After the meeting, Perciasepe rode in Kevin Berken’s combine to watch for yellow rails darting out of the rice. They saw several Virginia, sora and yellow rails.

Perciasepe was joined on this visit by Sara Bittleman, EPA agricultural counselor, who said she was persuaded to visit the festival by one of its organizers, farmer Kevin Berken. Bittleman, a former adviser to U.S. Department of Agriculture Secretary Tom Vilsack, had come to Louisiana in April to become more familiar with Louisiana agriculture.

Kevin Berken said the festival drew visitors from 27 states, Canada and Washington, D.C. He said he helped start the festival to show people the ecological significance of rice.

“It’s a wonderful crop for birds,” Kevin Berken said. “The habitat provided for the birds provides sustenance for people around the world.”

Perciasepe, former chief operating officer of the Audubon Society, told birdwatchers they are among 24 million Americans who travel to see birds.

Larry and Judy Boyd of Alberta, Canada, attended the festival to see their first yellow rail. “We actually came down a little earlier and we went to New Orleans and Baton Rouge,” Judy Boyd said.

Although the yellow rail spends summers in Canada, she said they’ve never seen one. “I’ve heard it there, but I’ve never seen it.”

During their Louisiana visit, the Boyds identified 92 different bird species and added six to their life list, including the red-cockaded woodpecker and the gull-billed tern.

Also Thursday, the EPA officials were given a tour of the White Lake Wetlands Conservation Area with Mike Strain, commissioner of the Louisiana Department of Agriculture and Forestry.

Strain said the EPA visit was significant. “We are honored that Deputy Administrator Perciasepe has chosen the rice fields of Louisiana to learn about Louisiana agriculture,” he said. “We are working to build relationships to inform them of key programs that affect our producers and the entire industry.”