What citrus lost in size is made up for in taste 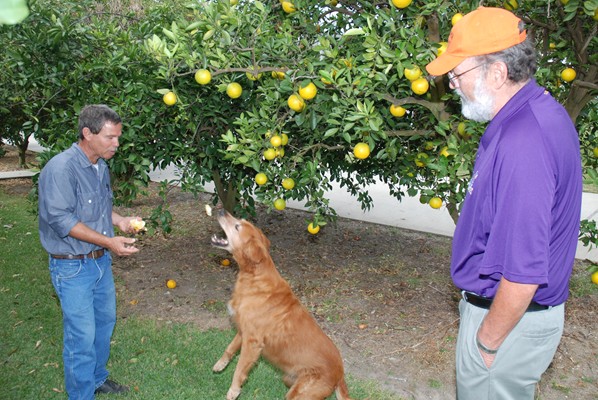 BELLE CHASE, La. – The lingering cold temperatures last spring may be affecting the quantity and size of some citrus crops but growers harvesting satsumas say this could be a bumper crop that is definitely better than last year.

“This condition contributed to a more incomplete pollination of flowers occurring on orange trees,” Schmit said.

Satsuma trees tend to bloom later than oranges and had warmer temperatures that promoted higher pollen activity as well as honey bee pollination.

Schmit said citrus is the ideal fruit for backyard growers in Louisiana because it can remain on the tree in good condition for a number of months.

“Beginning in October, growers can begin to harvest lemons, satsumas and kumquats,” Schmit said. “From late November through early December, oranges, grapefruit and other citrus should reach the full color stage.”

“The damage caused by Hurricane Isaac last year destroyed equipment and trees of many growers in Plaquemines and St. Bernard parishes, and some of those growers lost everything,” Vaughn said.

This has been the story in citrus areas for many years, Vaughn said.

“In 1920, there were 460,000 citrus trees on 4,600 acres in both St. Tammany and Calcasieu parishes,” Vaughn said. “The freeze in 1921 caused many to turn to other crops because the Great Depression wouldn’t allow them to return to citrus production.”

Vaughn said another freeze in 1923 wiped out St. Tammany’s citrus, along with many other parts of the state.

While others turned to alternative crops, the people in Plaquemines Parish continued to rely heavily on citrus, Vaughn said.

Then Hurricane Isaac came last year and flooded 200 of those acres. Vaughn said the trees are still there, but the growers lost their packing equipment, tractors and in some cases their homes, dropping production even further.

Danny Camardelle, a Plaquemines Parish grower along with his father-in-law Joseph Ranatza Jr. have a little over 40 acres of citrus. He said their crop is looking good right now.

“The harvest started off pretty good, and then it kind of slowed up the last week and a half,” Camardelle said. “We’re predicting that about a week and a half before Thanksgiving it will pick back up.”

Camardelle said the earlier satsuma varieties like St. Ann and LA Early are small, as usual, this year. But the Owari and Brown Select varieties seem larger.

Color tends to be an issue with a lot of consumers, but Vaughn said color is not as important as most consumers think.

“Satsumas and other citrus have to pass the Louisiana Department of Agriculture test for sweetness before they can be sold,” Vaughn said. “Most satsumas can past the test before the greenish color turns orange.”

Vaughn said cold weather can even turn the orange color back to a green. So, temperature and day length play a major role in ripeness.

At farmers markets, Camardelle said, people are always concerned with color, so he has them sample before they buy.

“I ask them to pick the greenest one and sample it,” he said. “But we have our mascot, Max, do the sampling on the farm.”

Max, his 10-year-old golden retriever is the one dog in south Louisiana that loves satsumas about as well as humans, Camardelle said.

“He will eat satsumas all day. Around here we believe if Max will eat it, then it’s ready for the market.”

“As the grower waits for it to color up, it’s actually getting sweeter and sweeter,” Vaughn said.

Satsumas and other citrus are also being harvested in other parts of the state, and the crop is looking good there also.

“The quality is very good and sweet, and most satsumas are displaying that pretty yellow-orange color,” Joffrion said.

The navels should be starting to move within the next two to three weeks and just in time for Thanksgiving, Joffrion said.

Vaughn reminds backyard growers that they need to have the fruit off the trees by Christmas so the tree can go dormant and become more cold-tolerant.

Because growers are dealing with new insects and diseases more than before, they are being encouraged to diversify their operations, especially since citrus canker disease was discovered in the state in June.

Camardelle said he is moving more to blueberries and is considering vegetables as an alternative to citrus.

“Growers realize that citrus canker disease could mean disaster for the industry since there is no treatment or cure for this disease,” Vaughn said.